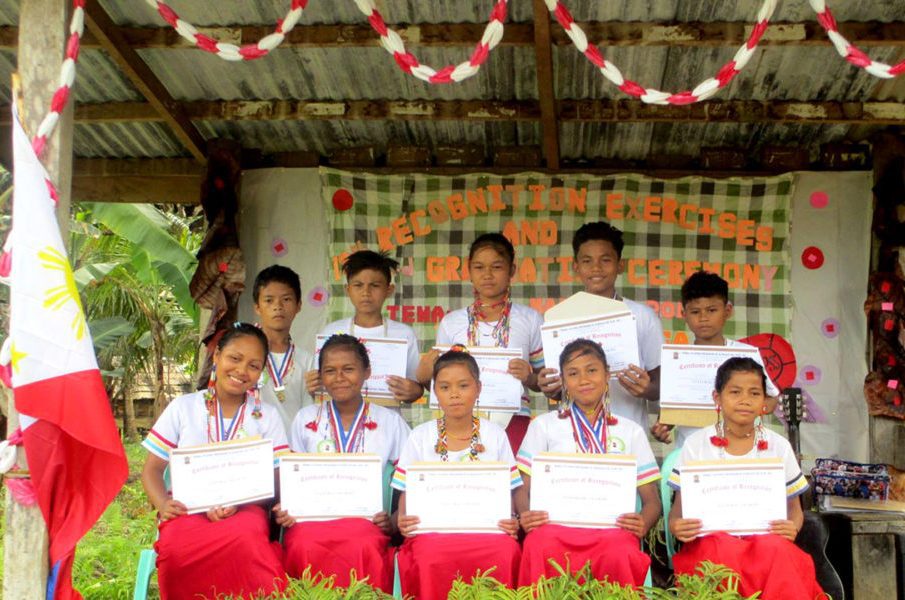 This is a B’laan phrase meaning “to continue.”

It is also the message of Lumad youth who were separated from their families and forced to evacuate from their communities after being displaced by military presence, encampment, and operations.

The Bakwit school does just that: Lumad youth are able to continue their education despite the disruption and attacks on the schools they set up in their communities.

In light of the February 15 police operation on the Bakwit School at the University of San Carlos (USC) campus in Cebu City, Lumad groups have shed light on the real context behind these makeshift educational facilities.

Representatives of Lumad organizations and other concerned individuals in a press conference denounced the raid where 26 individuals were arrested, including 22 Lumad students (19 of whom are minors), two datus (community leaders), and two teachers.

Their camp will file their defenses through a counter-affidavit on March 1. Currently, they are still collating evidence, according to lawyer Kristian Lora of Visayas Community Law Center, which is collaborating with the National Union of Peoples’ Lawyers on the case.

If indeed the students were being rescued, why were they apprehended and then slapped with raps?

Of the 19 students under government custody, seven were brought to Davao Del Norte without the consent of their parents, according to the Children’s Legal Bureau (CLB).

Lawyer Noemi Truya-Abarientos of CLB said they still have to confirm if the seven from Talaingod, Davao del Norte that they represent are already reunited with their parents, whom they no longer have communication with. The students have since been under the custody of the Talaingod local chief executive.

Contrary to official claims that the students were being trained as child warriors, they were only pursuing a normal education with the authorized consent of their parents, according to volunteer teacher Rose Hayahay of Lumad school Salugpongan Ta’tanu Igkanogon Community Learning Center (Salugpongan).

The teacher told Altermidya that the children came from communities where Lumad schools were forcibly shut down. Their parents, meanwhile, are either back in their respective communities or have settled down at the United Church of Christ in the Philippines (UCCP) Haran compound in Davao City to avoid the surging conflict back in their communities.

One of the parents of the Lumad students, Lorena Mandacawan, in a press conference at the UCCP Haran compound said they consented to send their children to study in Cebu. Mandacawan is a member of the Parents and Teachers Association of the Salugpongan Community Learning Center.

The Societas Verbi Divini Philippines Southern Province in March 2020 hosted the delegation of Lumad students, teachers, and community elders around the USC Talamban Campus after other Cebu educational institutions did the same. They were supposed to return to their respective communities upon finishing schooling in April 2020, but ended up stranded due to the COVID-19 pandemic.

Prior to USC, the first Lumad Bakwit School attended by the said delegates was established in the University of the Philippines Cebu in October 2019, before transferring to St. Scholastica’s Academy in Talisay, Cebu in January 2020.

Lumad leader Datu Tungig Mansumuy-at likewise agreed that it is the wish of any parent for their children to finish schooling.

Manila-based Lumad student Chricelyn Empong said that she and her peers are neither being paid nor used for ulterior motives. Their only form of fighting back, according to her, is the Bakwit School itself that teaches them to be critical.

Armed with textbooks and other educational instruments, the Lumad children are perceived as a threat, and understandably so.

Students in Lumad schools cultivate their knowledge to increase their agricultural productivity, directly combating foreign dependence and taking the challenge of food security into their own hands.

They train in literacy and numeracy to stand a fighting chance against interests that would take advantage of language barriers to dispossess them of their ancestral land.

According to historian B.R. Rodil, “a territory occupied by a community is a communal private property, and community members have the right of usufruct to any piece of unoccupied land within the communal territory.”

However, the Indigenous Peoples’ Rights Act of 1997 (Republic Act 8371) defines ancestral domains as all areas generally belonging to indigenous people up to the present “except when interrupted by war, force majeure or displacement by force, deceit, stealth or as a consequence of government projects or any other voluntary dealings entered into by government and private individuals/corporations, and which are necessary to ensure their economic, social and cultural welfare.”

Lumads have been driven out by logging and mining companies tapping into Mindanao’s wealth of resources like gold, copper, and nickel. The Lumads have also been the target of the state’s counterinsurgency operations.

Pres. Rodrigo Duterte even welcomed investors to develop ancestral domains in 2018. Just the year before, he threatened to bomb Lumad schools.

The need for bakwit schools lies in the name itself, “bakwit” or to evacuate.

In fact, evacuation has long been the practice of Lumads even before founding schools, according to Salugpongan Executive Director Meggie Nolasco. During tribal wars, they would seek safety elsewhere before returning to their community. Bakwit schools serve the same function by continuing education away from conflict until it subsides.

Before the age of blended learning under the Department of Education, Lumad students have already learned to adapt to radical shifts in the learning environment owing to a different pandemic: militarization.

The struggle of most students to cope with a changed educational landscape under COVID-19 coincides with the struggle of Lumad students, for whom adjustments are nothing new.

These makeshift schools only exist because of state attacks on indigenous peoples, including their community-based schools and ancestral lands. Nolasco said that less than 10 out of 215 Lumad schools remain in operation with more than 10,000 students displaced.

Karapatan also recorded 59 extrajudicial killings and six enforced disappearances of indigenous people between July 2016 and August 2020. These include Salugpongan student Obillo Bay-Ao, who was shot to death in September 2017 by a military agent in Talaingod, Davao del Norte. His death is the 47th documented political killing in Region XI (Davao Region).

In other words, Lumad students have been safer in bakwit schools than in their own communities — but not anymore.

Two existing bakwit schools stand to suffer the same fate as their Cebu counterpart. One is in UCCP Haran, while the other is in UP Diliman.

To make matters worse, the UP-based Bakwit School has been rendered vulnerable under the pretext of the UP-DND Accord’s abrogation that consequently allows state forces to enter university premises. This on top of the contentious Anti-Terrorism Law that defines terrorism vaguely and authorizes the wide-scale violation of human rights.

Save Our Schools (SOS) Network calls for support in order to prevent another scenario similar to the Cebu incident from transpiring. It urges organizations and individuals to speak out, volunteer in SOS Network, and help the CLB and other lawyers being red-tagged for representing IPs.