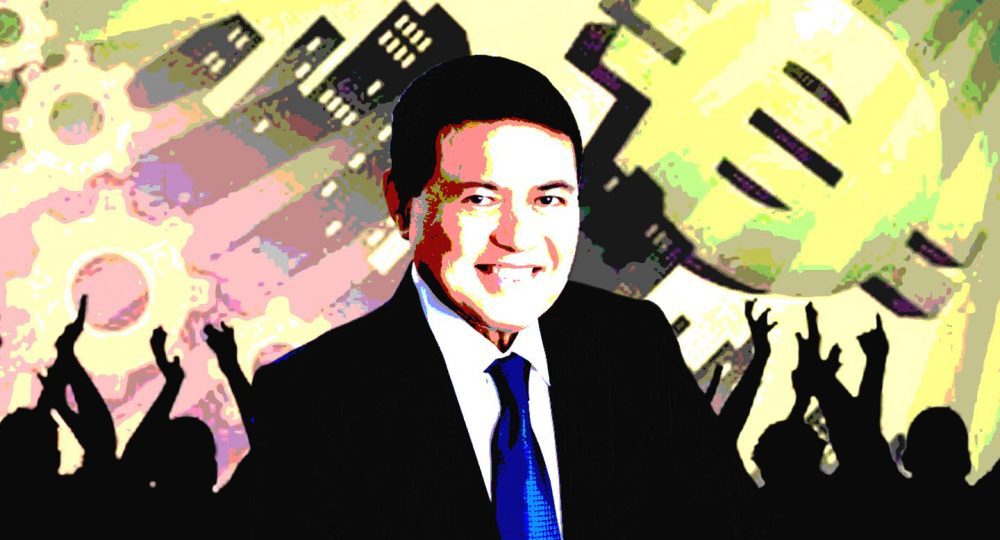 The most pressing issue we face at present as a species that is the irreversible destruction of the natural environment which threatens our very existence is– unsurprisingly– of secondary importance to our politicians and business leaders alike that there is hardly a debate or substantial discussion not even a passing remark in the media. Worse, when politicians and business leaders alike talk about the general situation of the world, we hear nothing but worn-out assumptions, dreary slogans, and speculations carried to the point of outrageousness.

One example is the interview conducted by Esquire magazine with politician and business tycoon Manny Villar back in 2015 which has been republished online in celebration of the release “of the latest Forbes list of the wealthiest people in the Philippines” which the interviewed “now finds himself rising to the #2 spot––after tripling his net worth to US$5 billion from $1.65 billion in 2017.”

It is a habit of lifestyle and entertainment magazines ruled by the values of glamour and publicity to magnify billionaires and the rich as exemplary romantic figures. Thus, in the course of the interview the interviewer asks the interviewed, “what else can you teach us?”

A great deal of the interview shows the excessively productive business life of Mr. Villar, and since the correspondence touches almost exclusively on business matters the question of the economic situation in the country is inevitable.

His thoughts on the “widening gap between the rich and the poor” are straightforwardly that of a businessman: dry, evasive, and not very enlightening:

“Yes, I think the gap is widening. For those below the gap, there’s no real wealth creation. Just a higher cost of living–their lifestyle goes up, they pay for more things.”

Those below the gap, the working class, the peasantry, and the Third-World countries are historically, economically, realistically the creators of wealth. For what is wealth or “capital” if not the product of human labour? But according to Mr. Villar “there’s no real wealth creation” which seems to contradict the Forbes report. Beneath the billions of dollars of the Forbes candidate are the countless, faceless people who laboured day and night to procure such wealth. As to the unstable wealth creation below which Mr. Villar alludes for the widening gap is quite misleading. In a study conducted by the sociologist and feminist Maria Mies remarked that the widening gap between the rich and the poor “is not as a result of ‘natural’ lagging behind but the direct consequence of the overdevelopment of the rich industrial countries who exploit the so-called periphery in Africa, South America and Asia. Mies continues:

“The relationship between these overdeveloped centres or metropoles and the underdeveloped peripheries is a colonial one. Today, a similar colonial relationship exists between Man and Nature, between men and women, between urban and rural areas… In order to maintain such relationships [the widening gap between the rich and the poor] force and violence are always essential.”

The high cost of living is first and foremost not the making of those below the gap but of the class to which Mr. Villar belongs and the government that allows and tolerates in a parasitic fashion that class. And the lifestyle in which they have to pay more for things which they can hardly afford to sustain it is not solely of their own choosing.

This picture of vulgar logic is intended to excuse the class of Mr. Villar in their responsibility in creating the dreadful gap. It underlies the idea of putting the blame on the victim allowing justification for the rich to admonish the poor: sipag at tiyaga (industriousness and persistence).

One is astonished at the sweeping adroitness of a politician and a businessman of the likes of Mr. Villar when he states that there is no wealth creation for those below. There is wealth. The problem is that the very wealth created by those below did not, in neoliberal terms, “trickle down”, instead it trickled UP to enrich the already rich on top. The question of the widening gap between the rich and the poor can be restated as an issue of wealth distribution; of implementing laws that will bar the rich from monopolization and accumulation of more wealth; of raising the minimum wage; of increase taxation on the rich; of approving agrarian reform; and of a critique and of replacement of the present economic system.

On the subject of “growth” the opinion of Mr. Villar is equally misleading and shortsighted:

There is very little proof (and a specious one if there is) that the Philippines would have grown faster if we all had been entrepreneurs, and that poverty “can only be reduced through business.” We, the readers, are left thirsty for evidence and persuasion. We are given none but the sweeping assumptions of a businessman inconspicuously arguing for more Villar properties and estates: “wealth creation is the way forward.”

If unlimited growth and development to Mr. Villar means increase of capital and GNP, an overwhelming body of evidence and studies enough to fill the private estates of the tycoon shows that unlimited growth has “led to an increasing deterioration in the environment, and subsequently the quality of life.” One only has to open one’s eyes and ears to the massive destruction perpetuated by growth and development embodied by multinational corporations on the natural environment and indigenous communities around the world.

The imputation that we’re not entrepreneurial enough seems to be utterly foolish in light of the imminent danger posed to our survival by the staggering rate of environmental destruction (mankind has annihilated 60% of mammals, birds, fish and reptiles since 1970) due to the unquestioned methods and practices of our present economic system (corporate capitalism). Perhaps what should concern us all is not that we are not entrepreneurs in the image of Mr. Villar or the country is not “growing” enough–besides, the world would be insufferably boring and colorless if we were all businessmen and we talked nothing but business–but to think and act on ways as to reverse or slow down the rapid destruction of nature on which our life depends. One not insignificant way is to rethink the dominant concept of growth and development.

The paradigm of unlimited growth that the Third-World countries have embraced as imposed by the developed countries “involved the reproduction of not only a particular form of wealth creation, but also of the associated creation of poverty and dispossession,” argued the physicist and activist Vandana Shiva.

“Dams, mines, energy plants, military bases –– these are the temples of the new religion called ‘development’, a religion that provides the rationale for the modernizing state, its bureaucracies and technocracies. What is sacrificed at the altar of this religion is nature’s life and people’s life. The sacraments of development are made of the ruins and desecration of other sacreds, especially sacred soils. They are based on the dismantling of society and community, on the uprooting of peoples and cultures.”

“The conventional paradigm of development perceives poverty only in terms of an absence of Western consumption patterns, or in terms of cash incomes and therefore is unable to grapple with self-provisioning economies, or to include the poverty created by their destruction through development. . . Culturally perceived poverty is not necessarily real material poverty: subsistence economies that satisfy basic needs through self-provisioning are not poor in the sense of deprivation. . . Subsistence, as culturally perceived poverty, does not necessarily imply a low material quality of life.”

What for Mr. Villar is the solution is in all accounts the real problem. The present economic model and its attendant culture of passive destructive consumption has cultivated and encouraged in us a business sensibility which has reduced us to mindless consumers and producers unaccountable for the social and environmental risks involved. Mies concludes:

“If more and more people buy this commodity the GDP grows. But what also grows at the same time is the erosion of community, the isolation and loneliness of individuals, the indifference and atomization of the society… market forces destroy communities.”

It is the present epidemic of growth and development which is the reason for the misery of the people below, particularly of the indigenous communities, and the unforgivable degradation of the natural environment. To ignore the realities of the environmental crisis is to admit the inevitability of social (global) suicide. Wealth creation is not the way forward, it is the way to self-destruction.