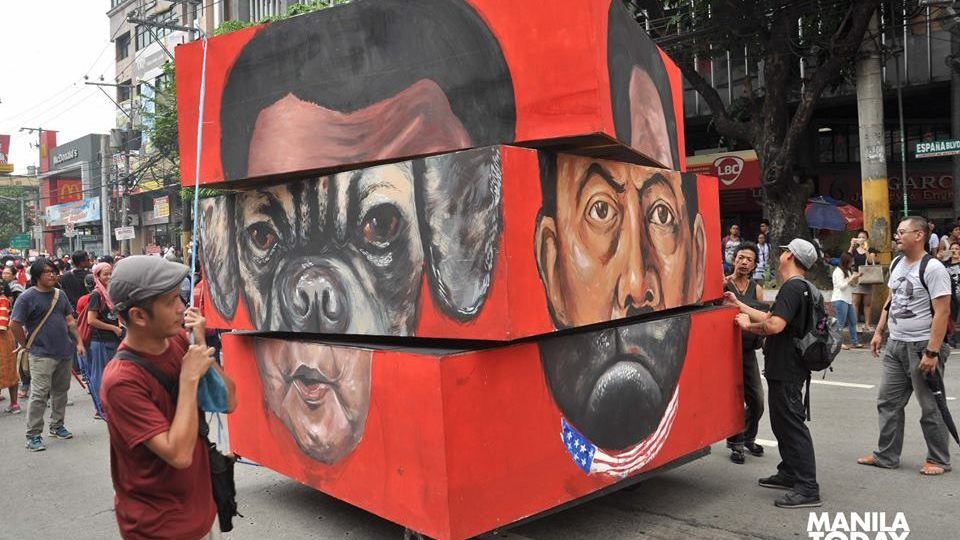 THE dominant press and media are often constrained by the political and economic interests of their owners and even some practitioners. On the alternative tradition therefore falls much of the responsibility to defend press freedom and to provide the citizenry the meaningful information it needs for it to arrive at an intelligent awareness and understanding of the reality of the present dangers to everyone’s liberties.

At the time of this writing, President Rodrigo Duterte had not placed the entire Philippines under martial law, consigning that threat to the long list of his blustering rants calculated to bully his critics into silence. A reimposition of authoritarian rule will be brazenly oppressive. But because it can escape, and has indeed eluded, the notice of many, even more dangerous is the Duterte regime’s irrefutable march to fascist rule without the benefit of a declaration.

Mr. Duterte threatened to declare martial law nationwide to frighten Filipinos into non-involvement in the September 21 protest against the return of dictatorship. The threat has succeeded in once more demonstrating regime contempt for the exercise of the lawful right to dissent, freedom of assembly, and free expression.

The organizers, primarily the newly formed Movement Against Tyranny, assured the public that the protest will be peaceful. But any violent incident, as their experience during the Marcos  imposition of martial law in 1972 should have taught Filipinos by now, could very well be instigated by the regime itself to justify military rule.

Ferdinand Marcos claimed as the immediate reasons why he placed the Philippines under martial law the series of bombings in Metro Manila and the ambush on the car of then Secretary of Defense Juan Ponce Enrile supposedly carried out by the “leftist-rightist” conspiracy  that he said was plotting to overthrow the government. But the bombings were the regime’s own doing, while the “ambush” on Enrile’s car was similarly staged.

Marcos declared martial law, abolished Congress, suspended the Constitution, closed down newspapers and radio and television networks, and had journalists, members of the political opposition, and student, labor and peasant leaders arrested and detained.

He also justified the declaration as the means with which he would “save the Republic and reform society.” But he did neither during the 14 years (1972-1986) in which martial rule was in place, his dictatorship being driven by his consuming desire to freely plunder the country without opposition, and to remain in power beyond the four-year term with one reelection limit on presidential tenure decreed by the 1936 Constitution.

There are well-founded fears that a repeat of that sorry chapter in Philippine history is likely. As Marcos did in 1972, Mr. Duterte could very well justify a declaration of martial law through the use of regime-sponsored acts of violence, which he can then cite as proof of the existence of the rebellion that the Constitution cites as among the legitimate reasons for martial rule.

Even if a declaration of martial law hasn’t been made by this time, it will be a constant danger during the remaining four-and-a-half years of Mr. Duterte’s disturbed and disturbing regime. But equally dangerous is that by simply ignoring the rule of law and the Constitution, and weakening those State and private sector institutions, among them the press, whose duty is to monitor government and hold it accountable for such abuses as extrajudicial killings and human rights violations, before they’re through Mr. Duterte and his collaborators in the civilian and military bureaucracy could have already cast the country into another long night of fascist tyranny.

The signs are everywhere in evidence. Mr. Duterte and his allies rail against critics including human rights defenders, and are openly hostile to the Philippine press and media. His rubber-stamp House of Representatives majority is orchestrating the impeachment complaint against the Chief Justice. The same body is engaged in the transparent attempt to either immobilize the Commission on Human Rights, whip into line, or compel its present commissioners to resign so they can be replaced by regime acolytes. Mr. Duterte has so empowered the police and military that it has resulted in the surge in extrajudicial killings and other human rights violations, the number of whose victims has surpassed the Marcos-era record. And the police and other government agencies have imposed various limits on the Constitutionally-guaranteed freedom of the press to report, comment, and provide analyses on government policies, actions and intentions.

In 2016, Mr. Duterte demonstrated even before he was elected to the presidency that he neither understood nor would tolerate the press’ meaningful discharge of that function. He dismissed the killing of journalists as warranted retribution for practitioner corruption. He publicly insulted journalists for asking him the hard questions they are duty-bound to ask candidates for office and public officials. Today not only do his online trolls demonize journalists for being critical of his regime. He also excoriates reporters and their organizations for simply reporting what he and his surrogates say or do. He has transformed government media into even worse, though flagrantly inept, vehicles of propaganda.

In the process, the regime has made it glaringly clear that it needs closer press monitoring than any of the administrations that preceded it. But because it has been taking steps to prevent the press from providing citizens the information they need to make sense of what is happening around them, as a result and with few exceptions, much of the dominant press has been either bullied into silence, or moved by their corporate and personal biases into approving regime abuses.  Some practitioners have also concealed their unwillingness and/or inability to take a principled stand against the threat to press freedom and citizen liberties by taking refuge in the myth of “objective” reporting.

One of the more recent regime attacks on the press is the Philippine National Police’s imposition of a ban on press access to documents to documents on ongoing police investigations. Several journalists’ groups have protested this attempt to weaken the press capacity to report on matters of public concern. But the alternative press and media have long understood that the ban is only the latest in a series of regime actions that must be resisted for the press to continue discharging its duty of providing the citizenry meaningful information, and to defend press freedom through its meaningful exercise.

Some members of the journalism community have called for unity in the face of such clear and present dangers as the attempts to deny media organizations franchises to operate; the orchestrated attacks and threats on some of the most respected journalists in the country; the barring of journalists from covering events of public interest that involve government agencies and officials; and the accreditation and preferential treatment of online trolls and regime-supported bloggers.

No matter the differences in their political, economic or ideological interests and perspectives, journalists must  together resist the many regime attempts to impose,  with or without a declaration of martial law, the same controls that during the Marcos terror regime made much of the press an appendage of the dictatorship, among the consequences of which was much of the citizenry’s being uninformed on such matters as the regime’s world class corruption and theft of  public funds and the enforced disappearances, torture and  extrajudicial  killings of regime critics and anti-dictatorship activists. The challenge to the dominant media is to transcend their narrow interests in favor of the larger social and human imperative of exposing and opposing tyranny.

The alternative and underground press provided the people the information they needed and which empowered them to overthrow the Marcos terror regime in 1986. The clear and present danger to Filipino liberties is the context in which the alternative press and media are being called upon to discharge once more their historic duty to defend press freedom, and to provide the people the information and analysis they need to understand regime despotism and to resist it through whatever means they may deem necessary.