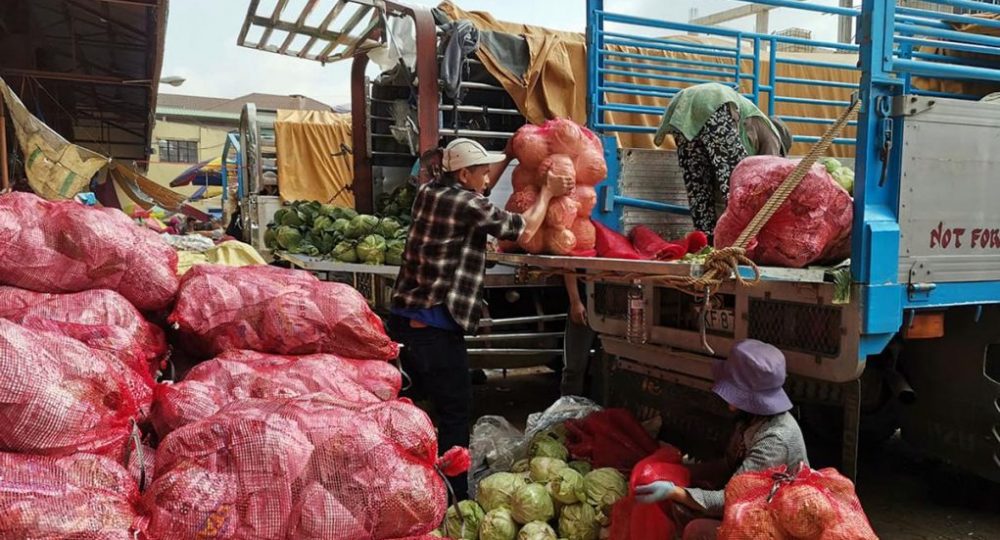 LA TRINIDAD, Benguet – Some vegetable traders and a farmer’s group expressed their worries regarding the long queue of vehicles in checkpoints and vague guidelines on the passage of trucks.

Their concern arose from reports that authorities guarding the checkpoints are barring trucks ferrying agricultural food products from entering certain areas. They also noted the impact of the long-line of vehicles that delayed the delivery of goods.

On March 17, authorities watching a checkpoint in Sison, Pangasinan ordered more than 50 La Trinidad-bound trucks to turn back.

Gilbert (surname withheld), a vegetable trader supplying establishments and markets in Metro Manila and Bulacan said the incident delayed their delivery and caused additional expenses. The vehicles were supposed to pick up vegetables. According to him, trucks came from Bulacan, Tarlac, and Pampanga with 15 to 20 tons capacity.

“We have to rent trucks from here because our trucks were sent back because they were empty, the police guarding the checkpoints said this is their regulations,” he said.

Gilbert said this means delayed deliveries and additional cost for vegetable buyers like him.

“It has been how we do things, empty trucks come up to be filled up with assorted vegetables,” he said.

The trader is also worried they might run out trucks if authorities continue to prohibit empty vehicles from coming up.

“We already agreed of a possible remedy if empty trucks will not be allowed to come up, we may arrange for a transfer in Sison, empty trucks will wait at the border for those coming from La Trinidad,” he said.

Ricky Simon also buys assorted vegetables in bulk at the La Trinidad trading post. His truck can carry a maximum of 8 tons.

Unlike Gilbert, his truck was allowed to pass through the Sison checkpoint. However, it took them 11 hours to reach the trading post because of the long line of vehicles caused by the inspections. On regular days, he said, it takes them around 6 hours.

“Hopefully, the traffic will not be the same on our way back,” he added.

Ricky worries the vegetables might wither or rot due to the prolonged travel time. If this happens, he might not be able to sell some of the products.

According to Aida Pagtan, information officer of the Department of Agriculture Cordillera, vegetable traders can apply for a food pass from the agriculture offices in their towns or province of origin. She said that the food pass would facilitate faster transport of agriculture products considering that these are mostly perishable goods.

The Philippine National Police and the Department of Agriculture promised to step up the movement of food and agricultural products. Besides issuing food passes for Metro Manila and other high-density areas, the agencies set-up a separate lane in the checkpoints and tool gates for vehicles ferrying food, fishery and agricultural products and needs.

“We are deeply concerned about reports that the movement of food products from nearby provinces is being restrained or even blocked, especially since the streamlining of food circulation has become more crucial under the current health crisis,” explained KMP national chair Danilo Ramos.

The peasant leader stressed that “now more than ever, the government should assist farmers in the production and distribution of adequate food supplies.” He pointed out that the supposed food lanes are absent in many checkpoints.

“The bureaucratic imposition of food lane passes and the militarist orientation of the entire COVID-19 response practically restrained further the flow of food products,” Ramos said.

He reminded officials that local governments, mandated by Malacañang to provide food packs for poor and needy families, would also face difficulty if the problem continues.

Ramos expressed fear that “the hindered movement of food, along with the panic buying of some consumers, is already affecting the food supply in Metro Manila.” He said there are already cases of inflated food prices, particularly fish and vegetables. Some wet markets are also about to close due to the insufficient deliveries.

To ensure the free and unhampered movement of food, KMP recommended that DA simplifies the accreditation process. The group also urged the office to undertake a subsidized transport program of food products into urban centers. They also demanded production subsidies for farmers to produce more and healthier food.

“We reiterate that this is the best course of action for all as it can also drive down food prices while assuring its supply and the livelihood of farmers,” Ramos ended. Kimberlie Quitasol/nordis.net