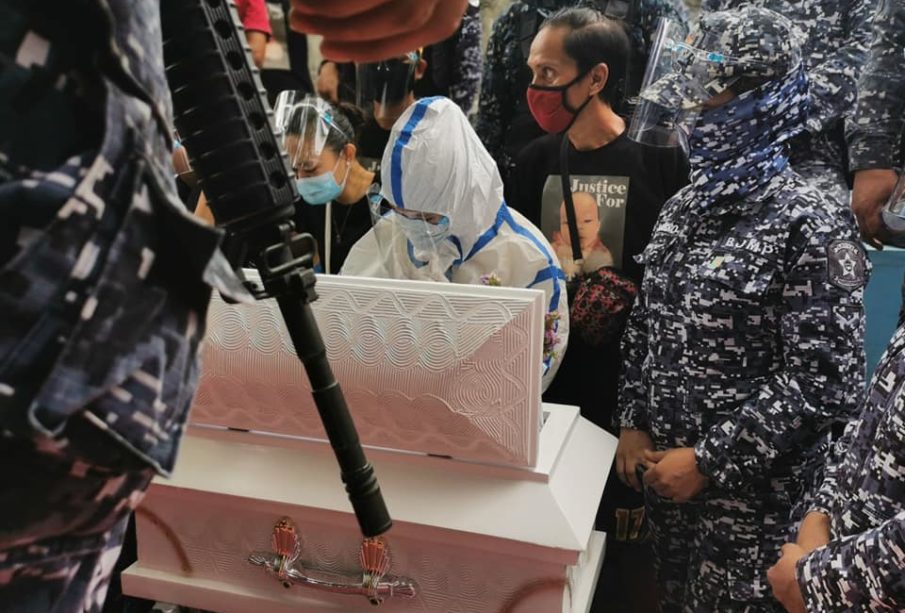 One of her lawyers, Katherine Panguban of the National Union of Peoples’ Lawyers, asked the police to free Nasino’s hands so that she can hug her daughter for the last time. It fell on deaf ears.

According to human rights group Karapatan, elements of the Bureau of Jail Management and Penology (BJMP) and the Philippine National Police commandeered the whole funeral rites of Baby River, “from whisking off Baby River from the funeral homes without the Nasino family to controlling the route where the caro will pass.”

The police ordered the driver of the caro to quickly depart from the funeral parlor. Nasino’s family and supporters were left behind as the car carrying River’s remains suddenly sped off.

River was brought inside the cemetery without the presence of her family. Nasino and her baby were surrounded by heavily armed policemen and jail guards.

In a short program during the burial, Nasino’s mother, Marites Asis lamented, “Why did this happen? I thought this would be our moment. This is not solemn. Don’t you have a family?” Asis said, speaking to the police and jail guards at the cemetery.

At the funeral parlor, Asis knelt before the policemen brandishing long firearms, pleading them to let River be with her mother for the last time.

The supporters were also not able to hold a short ecumenical prayer.

‘Fight does not end here’

In between sobs, Nasino told her daughter, “Pinagkaitan tayo na magkasama. Hindi ko na nakita yung halakhak mo…” (We were deprived of the chance to be together. I was not able to see you laugh)

River was forcibly separated from her mother a month after she was born. The local court denied Nasino’s plea to allow her to be with her baby for at least a year. Deprived of her mother’s care, River fell ill several times and died on Oct. 9 due to acute respiratory disease.

“Lalaya ako nang mas matatag…Hindi tayo nag-iisa. Panandalian lang yung pagdadalamhati natin pero maghahanda tayo para sa pagbabalikwas natin. Babangon tayo,” she said. (I would come out of this stronger…We are not alone. Our anguish is just temporary and we will prepare to fight back. We will rise up.)

In a statement, Kapatid, a support group for political prisoners and their families said, “Today’s injustice tells us to resist the government’s persecution versus the powerless.”

In his speech, Raymond Palatino, chairperson of Bayan-Metro Manila, said, “We will lay to rest Baby River today but our fight will continue.”

Nasino, along with three other activists, was arrested on Nov.5, 2019. Her lawyers maintained that the warrant issued for the arrest was defective and the evidence were planted. (https://www.bulatlat.com)