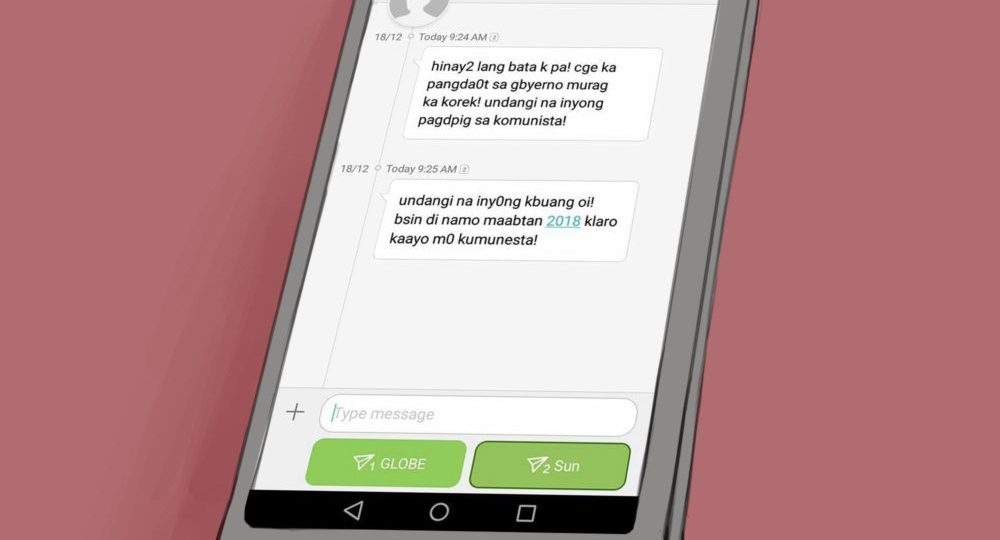 Cortez received threatening anonymous messages on Dec. 18, while De Vera was illegally arrested on Dec. 12. These violations against journalists threaten free expression and pose a serious danger to press freedom.

Cortez received a series of SMS messages from an unlisted number. The first one read, “hinay2 lang bata ka pa! Cge ka pagdaot sa gbyerno murag ka korek! Undangi na inyong pagdpig sa komunista!” (Be careful, you are still young. You keep on criticizing the government as if you are always right. Stop siding with the communists!)

It was followed by another message saying “Undangi na inyong kabyang, oi! Basin di namo maabtan 2018 klaro kaayo mo kumunesta!” (Stop your foolishness. You may not live long enough to see 2018, it is clear you are a communist!)

The series of text messages ended with a death threat saying “isang bala para nimu! Meri xmas!” (A bullet for you! Merry Christmas!)

Cortez, an award-winning broadcast reporter and anchor, has been reporting and commenting on the human rights violations experienced by the Lumad communities in her morning segment, “Morning Review” over Radyo ni Juan. On the day she received the text messages, she had just commented on the presidential granddaughter’s lavish pre-debut photo shoot in Malacanang Palace.

The text messages are clearly meant to intimidate and dissuade Cortez from freely reporting and commenting on issues of public interest. Such harassment against a journalist performing her duty is a serious concern amid intensifying repression against the Duterte government’s perceived critics.

Only last week, Sherwin De Vera, a respected columnist of Northern Dispatch Weekly in Northern Luzon was arrested without warrant in Barangay Bulag, Ilocos Sur. The Criminal Investigation and Detention Group (CIDG) maliciously charged him with a trumped-up rebellion case. De Vera, an environment activist who wrote about the dangers of black sand mining activities in the Ilocos region, had earlier reported being tailed by suspected military agents in July.

The red-tagging of Cortez and De Vera clearly makes them a target of Duterte’s crackdown order on activists, progressive groups, and political dissenters. In a climate of rising tyranny and continuing impunity, media’s crucial role in bringing out important issues and the people’s voice to the public is more urgent than ever. We condemn the continuing attempts to silence media practitioners with threats, harassment, intimidation, and illegal arrests, as we denounce the Duterte regime’s increasing repression against human rights defenders, progressive groups, activists, and critics.

We condemn the people behind the harassment of Kath Cortez and demand the immediate release of Sherwin De Vera. In the face of the threats to their right to free expression and free press, progressive and independent journalists will not be intimidated into silence and will continue to discharge their vital responsibility of truth-telling.