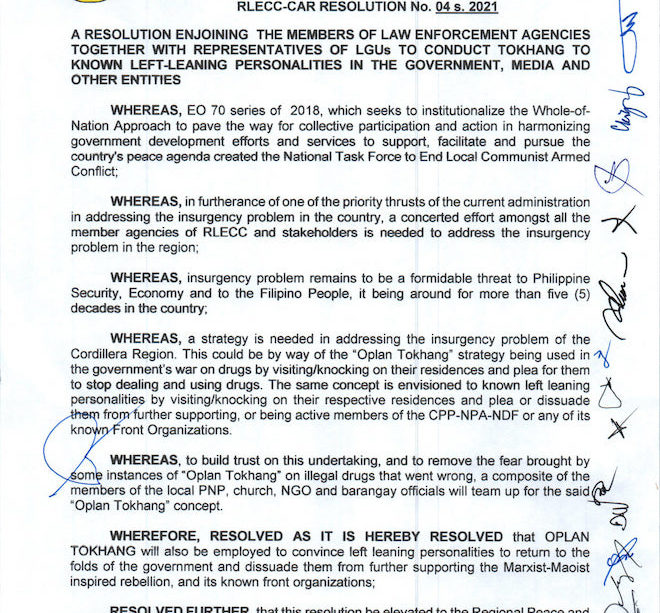 THE ALTERMIDYA NETWORK condemns the Cordillera Regional Law Enforcement Coordinating Committee (RLECC) for passing a resolution recommending a “Tokhang-style” tactic against individuals, including journalists, who are known “Left-leaning personalities”.

This development coincides with the ongoing international probe on the deaths linked to the administration’s drug war, with Justice Secretary Menardo Guevarra admitting in a report to the United Nations Human Rights Council that “the law enforcement agents failed to follow standard protocols” in many drug war operations.

And now, the Cordillera RLECC resolution: a dangerous document that explicitly names the media as possible targets in the conduct of Tokhang.

The resolution comes amid non-stop attacks against alternative media practitioners in the Cordillera. In fact, our colleagues in community news outfit Northern Dispatch (NorDis) are facing all forms of attacks and persecution: from red-tagging and filing of cyberlibel charges to attempted murder.
In 2019, Brandon Lee, a Nordis correspondent and environmentalist, was shot by unidentified gunmen in front of his home in Lagawe, Ifugao. He was seriously wounded and is continuing to recover.

The same tactic was also employed against another Nordis journalist, Khim Abalos. The subject of the cases involves stories critical of Pagkalinawan, which were published in April 2020.

In June 2020, the La Trinidad Police Station openly red-tagged Abalos as a recruiter of the New People’s Army. Several reports of flyers red-tagging Nordis reporters have also been recorded in several instances. And as far back as 2017, Sherwin de Vera, Nordis managing editor, was also charged with rebellion, a case that was junked in October 2020 for lack of evidence.

Another colleague, Paola Espiritu, our Ilocos correspondent for Nordis, has been linked with the communists and maligned by the military since 2018. Last year, the 81st Infantry Battalion, on three different occasions, accused Paola of being an NPA member. The relentless harassment against her has taken a toll on her emotional state, and according to our Nordis colleagues, she now has to seek refuge.

We have been denouncing these incidents as attacks meant to silence the grassroots, pro-people reporting upheld by Nordis, whose stories shed light on issues that affect the communities of peasants and indigenous people in Cordillera. With the Cordillera RLECC resolution, the situation is expected to get worse, and may even expand to other practicing journalists in the region – at the expense of our freedom of expression and right to information.

Just as we fear for the lives of our colleagues in Cordillera, we also surmise that the Cordillera RLECC is a test case that government officials will use for future plans of employing Tokhang tactics to stifle dissent in other parts of the country.

We call on the national government, as well as concerned agencies to immediately stop the enforcement of the said resolution. This resolution will surely be used in tandem with the Anti-Terrorism Law and would usher in more attacks, if both were not stopped.

We call on our fellow journalists, human rights advocates, and the Filipino public to denounce the Cordillera RLECC resolution. We need to jointly, resolutely fight this new attack against our fundamental freedoms.