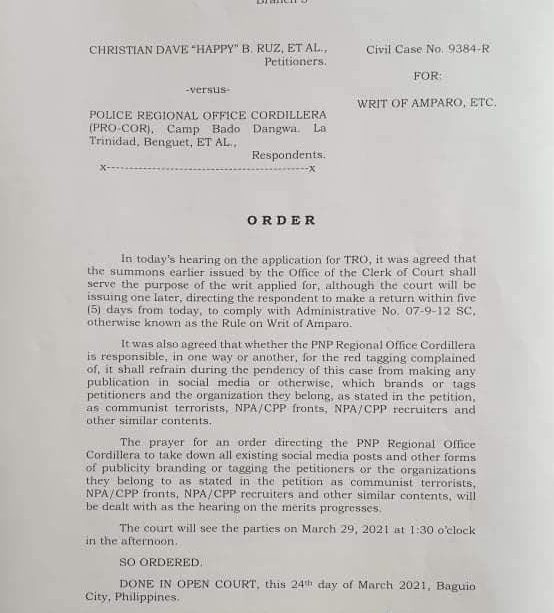 BAGUIO CITY—Youth leaders in the city scored a legal victory against the government’s practice of tagging activists as recruiters and their organizations as fronts of the Communist Party of the Philippines (CPP) and New People’s Army (NPA) after the court ordered the Cordillera police to cease the practice.

On the same day, Judge Emmanuel Rasing of the Baguio City Regional Trial Court Branch 3 told the Police Regional Office Cordillera (PROCOR) to “refrain during the pendency of [the] case from making any publication in social media or otherwise” branding the petitioners and their organizations as CPP-NPA recruitment fronts. The directive, made in open court, includes all personnel and units under PROCOR’s command.

The judge also ordered the police to investigate the red-tagging incidents contained in the complaint and submit a report within 72 hours.

The following day, March 25, the same court issued the Writ of Amparo, ordering PROCOR, through its chief, PBGen. R’Win Pagkalinawan, to reply within five working days.

The Writ of Amparo is a legal remedy that individuals whose rights to life, liberty, and security are under threat or have been violated by the government or private entities. It was instituted through the initiative of former Chief Justice Renato Puno in September 2007 to address the rampant extra-judicial killing of activists under the presidency of Gloria Macapagal-Arroyo.

In a joint statement, the petitioners said the “intensifying tyranny and repression” they witnessed across the country compelled them to take a “decisive action” to protect themselves and halt further rights abuse.

“After months of documenting incidents in and out of social media, we felt that we urgently needed more decisive actions on cases of red-tagging and to prevent other human rights violations that come with it,” the petitioners stated.

They cited the killing of nine Tumadok leaders in Panay on December 30 and the Bloody Sunday raid in Southern Tagalog that resulted in the death of nine activists. In both incidents, the police and military used the “nanlaban” (fought back) narrative to justify the massacre.

“The Court order, though initial, is a meaningful victory not just for us as petitioners, but all activists and critics facing daily threats. Political dissent has been upheld as a right and not a crime,” they said.

“As activists, we will remain true to our principles to serve the people in the face of difficulties and sacrifices. Buong-puso at buong tatag, we will fight on!” the petitioners added.

“While we take this as a victory, we shall remain vigilant as we know how state forces easily brush aside the rule of law,” Ruz, one of the petitioners said.

The group considers the decision a “modest victory” and “humble tribute” to the activists killed while working for the promotion of human rights, justice, and peace.

“Though the initial court orders applies to the petitioners, it also impacts on other activists and organizations who have been subjected to red-tagging, political vilification and other human rights violations, warning State security forces from committing these with impunity,” CHRA added.

Human rights group Karapatan lauded Rasing “for his immediate actions” on the petition.

“Such actions should be taken as examples on how courts should address in a relevant and timely manner the particular risks to life, security and liberty of human rights defenders,” said Cristina Palabay, Karapatan secretary-general.

She also urged the court to consider “expanding its orders to the taking down of similar materials” in places “and to other government officials and offices in the region, who have engaged in such acts.”

“[The court] can also make its orders known to Facebook on how the platforms like theirs are being abused for such purposes,” she added.

Palabay is hopeful that the court will issue a protection order and specific mechanism to ensure the security of the petitioners. #

COVID-19 cases to double in 2 months – UP experts