‘Environment-friendly’ project an excuse for landgrabbing in Hacienda Luisita? 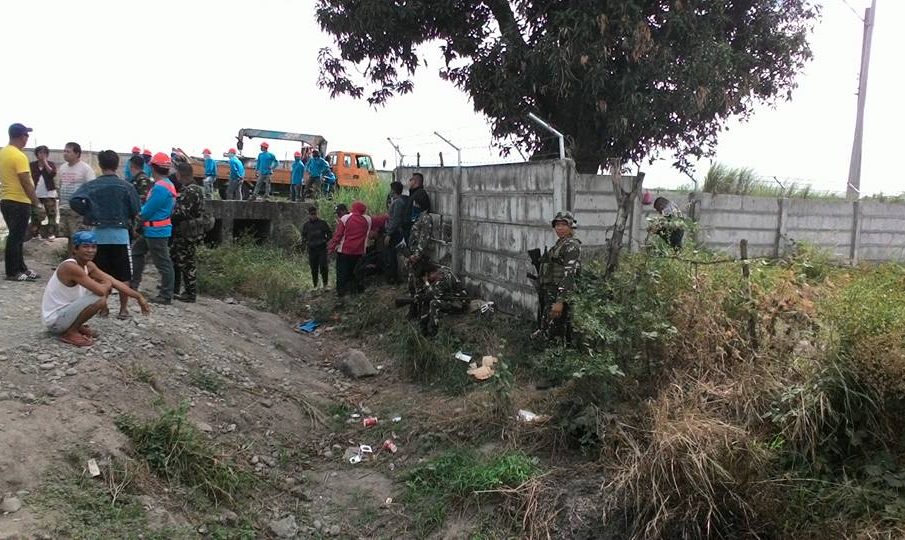 While Pres. Benigno Aquino III is “rubbing elbows with other hypocritical world leaders” at the 21st Conference of Parties (COP 21) Climate Talks in Paris, France – an “environment-friendly” government project has come under fire for supposedly being used as an excuse to retain control of Hacienda Luisita.

According to Unyon ng Mga Manggagawa sa Agrikultura (UMA), the Department of Energy (DoE) has started to construct the Tarlac Solar Power Project (TSPP), a public-private partnership (PPP) deal, in lands that should have been distributed to farmers.

On November 21, Florida Sibayan, chairperson of Alyansa ng mga Manggagawang Bukid sa Asyenda Luisita (AMBALA), was punched in the face and threatened with a firearm by a “goon” working for a subcontractor for PetroSolar, the DoE’s private partner for the project.

The goon, identified by AMBALA as May Quiambao, was being confronted by Sibayan over the construction of distribution poles and lines for the said solar project in Barangay Balete, Tarlac.

Seven days after, on November 28, PetroSolar’s subcontractor were joined by members of the Armed Forces of the Philippines (AFP) and Philippine National Police (PNP). Protesting farmers led by AMBALA somewhat successfully tried to reason with the laborers to cease their work, despite harassment by the AFP and PNP.

There are also reports of intensified military and police presence in the villages of Balete, Lourdes (Texas) and Central in Hacienda Luisita.

The UMA has denounced the aforementioned attacks, which it said were attempts to mask the continued landgrabbing in Hacienda Luisita. “The completion of the Tarlac Solar Power Project will only set a precedent that may lead to the complete wipe-out of Hacienda Luisita’s farming community,” Ranmil Echanis, UMA secretary general, said.

The Tarlac Solar Power Project covers 500 hectares of land claimed by the Cojuanco-Aquino-owned firm Luisita Realty Corporation (LRC) and Yuchengco-owned commercial bank RCBC, while electrical posts from the plant are projected to go through 260 hectares of agricultural land also claimed by TADECO, another Cojuanco-Aquino firm.

Indeed, the situation for Hacienda Luisita farmers has only gotten bleaker, despite a Supreme Court decision saying that the farmers are the rightful owners of the land.

Hacienda Luisita, Inc. (HLI) owned by the Cojuanco-Aquino clan still owes the farmers PhP 1.33 billion for the irregular sale of land assets under agrarian reform, yet the farmers have received none of it.

Farmers were also forcibly evicted from TADECO lands during 2013-2014 when, in spite of an issuance of a Notice of Land Reform Coverage by the Department of Agrarian Reform, police and goons bulldozed and burned their crops and homes

DoE’s partner for the planned solar power project, PetroSolar, is a newly-formed subsidiary of PetroGreen Energy Corp., which itself is a subsidiary of PetroEnergy Resources Corp. (PERC; formerly Petrotech Consultants Inc.). Intially formed to provide technical services to companies searching for oil in our country, PERC currently focuses on mining and oil.

PetroGreen, on the other hand, was later formed by PERC and incorporated to “carry out renewable energy projects.” Among these are the 20MW Maibarara Geothermal powerplant in Batangas where it has 60 percent ownership and the 50MW Nabas wind power project in Aklan where it holds 40 percent equity interest.

A German firm, Conergy, is also DoE’s partner for the said project.

“The TSPP in Luisita is not about renewable energy, reducing carbon emissions, or any other environmental issue that world leaders are supposedly debating about in Paris. The solar power project in Luisita is basically about landgrabbing, swindling and forcibly evicting farmworkers from this promised land,” Echanis said.