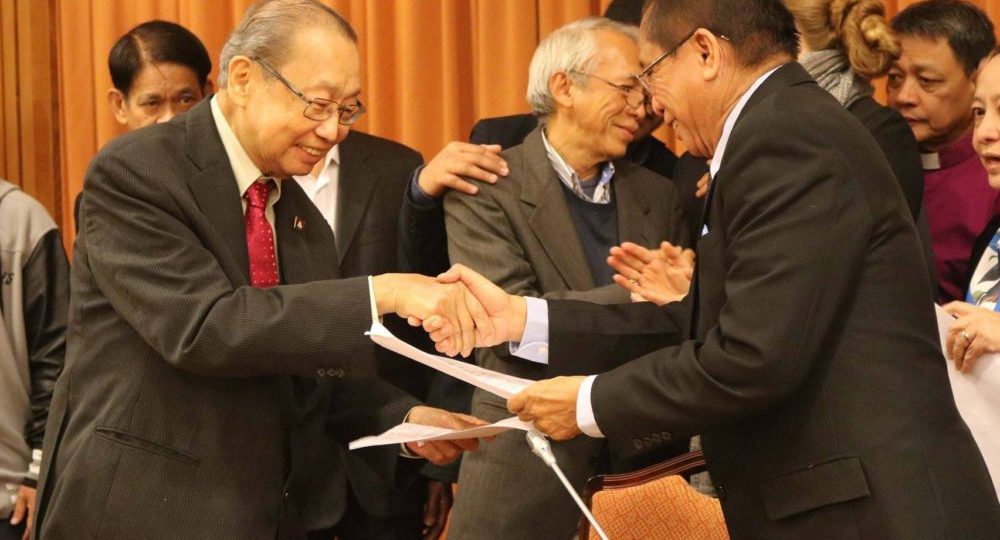 THE FORMAL peace negotiations between the Philippine government (GRP) and the National Democratic Front of the Philippines (NDFP) concluded an “exacting yet successful” fourth round of talks in Noordwijk, the Netherlands.

One of the gains made from the round was agreeing to an interim joint ceasefire, which both panels hope will give way to a more stable ceasefire agreement and a better environment for the early signing of the important agreement on socio-economic reforms. The parties have set the next round of talks in May, a month earlier than planned.

That the peace negotiations have reached this far and sustained its momentum despite a number of drawbacks attests to the commitment of the two parties to talk peace. Since the Duterte government revived the long-suspended peace talks last year, the negotiating panels had to contend with many challenges which, according to the NDFP, were the handiwork of what it calls “peace saboteurs” in the Duterte administration.

Despite these, the ongoing talks yielded unprecedented results and advanced at a pace both negotiating panels had not expected. It should be underscored, however, that the breakthroughs in the ongoing peace talks became possible because both panels reaffirmed their commitment to respect the basic framework of the peace talks (The Hague Declaration) and other previously signed agreements.

There are other reasons why the current peace negotiations can be considered unprecedented. Here are five of them:

1. Agreeing, in principle, to distribute land for free

The issue of the ceasefire was among the prominent topics discussed during the third and fourth round of talks. But what seemed overshadowed were the important advancements made in the negotiations on socio-economic reforms (SER).

Most crucial in the SER negotiations was that both parties agreed on the principle of free land distribution. For the NDFP, distributing land for free to tillers, farmers, and agricultural workers is the heart of an effective agrarian reform program. The NDFP believes that genuine agrarian reform will address the issue of land monopoly and dismantle the huge concentration of land from the hands of a few landlords.

NDFP peace consultant Wilma Tiamzon had this to say about the outcome of the SER discussions: “The agreement on free land distribution was not reached under any of the past administrations. The NDFP was steadfast in pushing for this through its reciprocal working committee. It is clear that the issue of free land distribution is to make fundamental changes in the situation of the peasantry that have been suffering from the slow pace of the bogus land reform program for a long time.”

The most important task now, according to Tiamzon, is for the peasants to organize themselves and build their own strength to advance these initial unities on free land distribution – a fundamental issue that farmers have long been struggling for.

2. Fast-tracking the draft and finding a lot of common ground in the CASER

Reconciling two different drafts for the comprehensive agreement on socio-economic reforms (CASER) was reportedly tough work for both parties during the fourth round. But according to Randall Echanis of the NDFP reciprocal working committee on CASER, there is already a lot of common ground between the GRP and NDFP drafts in terms of their basic scope and applicability. “Hindi malalaki ang pagkakaiba, in general,” Echanis explained. “Pwede sabihing nagkaroon ng commonalities.”

The discussions on CASER, considered by both parties as the “meat” of the peace negotiations, are aimed at finding solutions to the country’s economic backwardness, poverty, and underdevelopment. By solving these, it addresses the underlying problems of the armed conflict.

The CASER agenda acknowledges that the current neoliberal model has failed to uplift the lives of Filipinos, and proposes similar steps that wealthy countries did that paved the way for their progress – such as implementing agrarian reform, building local industries, protecting farmers and workers, and nationalizing strategic industries.

While there are already some consensus, Echanis said that there are many provisions that still demand greater discussion and resolution in the course of the negotiations. CASER discussions continue to be the main agenda in the next round of talks and bilateral meetings in between.

The discussions are expected to be challenging as the two parties tackle other important parts of land reform and industrialization. Both the GRP and the NFDP hope to sign the CASER within the year.

3. Agreeing to make the Joint Monitoring Committee, a mechanism to check on the human rights violations of both parties, fully operational

During the third round of the peace talks early this year, the two peace panels agreed to launch the Joint Monitoring Committee (JMC) into full operation.

What is the JMC? The joint monitoring committee is a mechanism launched in 2004 to make sure that both the GRP and the NDFP are abiding by their duty to respect human rights and follow the rules of war in the conduct of the armed conflict. These obligations are embodied in the Comprehensive Agreement on Respect for Human Rights and International Humanitarian Law (CARHRIHL), which both parties signed in 1998.

Although the JMC through its Joint Secretariat, has received thousands of reports of human rights violations against both the GRP and the NDFP, it never conducted joint activities like investigating complaints of human rights violations that both parties received. This time, it can now look into the complaints filed by each side and make recommendations in compliance with the CARHRIHL.

What is positive about a fully-operational JMC, according to the NDFP, is that both parties can proceed with other matters in the substantive agenda without being bogged down by accusations of human rights violations. This can contribute in speeding up the peace negotiations, the NDFP said.

During the back channel talks last March, the GRP and NDFP agreed to deposit and safe-keep a reconstituted list and photos of peace negotiators who are protected under the Joint Agreement on Safety and Immunity Guarantees (JASIG).

The JASIG, which was signed in 1995, gives safety and immunity guarantees to peace consultants, staff, security and other personnel who participate in the GRP-NDFP peace negotiations. Those on the JASIG list are assured of protection from surveillance, harassment, arrest, detention, and prosecution.

The original list could no longer be opened when digital files containing pass keys were corrupted. This happened after Dutch police raided the NDFP office in Utrecht in 2007 and confiscated their files and computers.

The previous Aquino administration refused to reconstitute the JASIG list during its term. Under Duterte – after the brief impasse on the peace negotiations in February – the GRP “restored” the JASIG and scheduled the deposit and safekeeping of the reconstituted list of holders of NDFP Documents of Identification. This commitment appeared in the joint resolution signed during the back channel talks in March.

Following the peace talks framework, the peace panels will start working on the political and constitutional reforms (PCR) after the agreement on the SER is signed. But during the third round of talks in January, the GRP and NDFP had already exchanged full drafts and made initial discussions on the tentative agreement on the PCR. By the fourth round, the committees started their work on reconciling the two parties’ draft.

According to the NDFP, its primary interest in the PCR agreement is to uphold national sovereignty. At the same time, it expressed openness in supporting the shift to a federal system of government, a vision of Pres. Duterte. The NDFP also agreed on making amendments to the Constitution provided that the amendments will include safeguards against foreign monopoly capitalism, warlordism, dynasties, and corruption.

As early as the first round of talks, both panels already agreed to fast-tracking the peace negotiations. This means that while the agenda on the SER is being discussed, the peace panels can already work on the next two substantive agenda (political and constitutional reforms; and end of hostilities and redisposition of armed forces). This way, key agreements will be signed earlier so there is enough time to implement these before coming out with a final peace agreement.

THE MILESTONES reached from the previous rounds of talks were not without innumerable difficulties.  Peace advocates have warned about the “peace saboteurs” and militarist elements in government that could undermine the gains made in the talks. But both the GRP and NDFP peace panels avow their commitment to resolving difficulties and moving the peace negotiations forward.

Third party facilitator Elisabeth Slattum seemed to aptly describe the positive disposition of the peace panels against the odds: “The parties worked through a tough crisis, showed perseverance, courage and genuine commitment to achieve peace for the benefit of the Filipino people.”