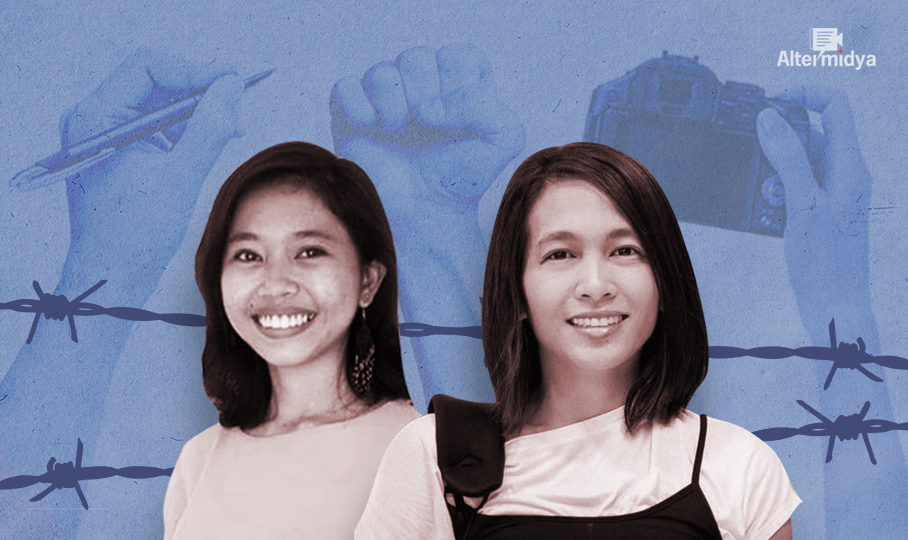 TWO JOURNALISTS ARRESTS in 2020, ten months apart: One was in February, a few weeks before the pandemic fully enveloped the country, while the most recent one was in December, ironically coinciding with the observance of the International Human Rights Day.

Frenchie Mae Cumpio, executive director of Eastern Vista, a member media outfit of Altermidya Network, and radio anchor at Lingganay han Kamatuoran, was one of those nabbed in separate dawn raids in Tacloban City on February 7, 2020. Today is her 11th month in detention.

Lady Ann ‘Icy’ Salem, editor of Manila Today, another member media outfit of Altermidya Network, was nabbed in one of four separate dawn raids on December 10, 2020 in her condominium residence in Mandaluyong City.

The similarities in these two arrests are evident: both arrests were made during the wee hours of the morning, and in both instances, high-caliber firearms and explosives were supposedly found in the places where Frenchie Mae and Lady Ann were staying. Both are community journalists with a stellar record of reporting issues of the marginalized and underrepresented – Frenchie Mae, on issues hounding farmers and workers in Tacloban City and Eastern Visayas, and Lady Ann, on the plight of the urban poor and workers in the nation’s capital region.

In both instances, military officials were quick to tag Frenchie Mae and Icy as “high-ranking cadres” of the Communist Party of the Philippines (CPP), but offered not a single piece of credible evidence.
Altermidya Network is no stranger to this narrative. In a Senate hearing in December, so-called intelligence officials claimed that our network is a member of the communist underground, a claim so baseless and unfounded.

For reporting the truth and publishing critical views on current issues, Frenchie Mae, Lady Ann, and many independent journalists around the country have been vilified, charged with incredible cases, and unjustly arrested. For championing press freedom, they are suppressed and forced into silence.
The end goal of these attacks against Frenchie, Lady Ann, Altermidya, as well as on major media outfits like ABS-CBN, Inquirer, and Rappler is to conceal from the public the corrupt acts, incompetence, and widespread violations against people’s rights and welfare.

But these attempts by those in power to stifle the truth from being reported will not deter the media, nor the public, from exposing the realities under the Duterte administration and defending whatever is left of our democracy. We reiterate our call to free Frenchie Mae and Lady Ann, to defend free expression and press freedom at all cost, and to fight tyranny in every form.