Home›Network›‘Go back to barracks’: Masbate farmers demand pullout of military from communities 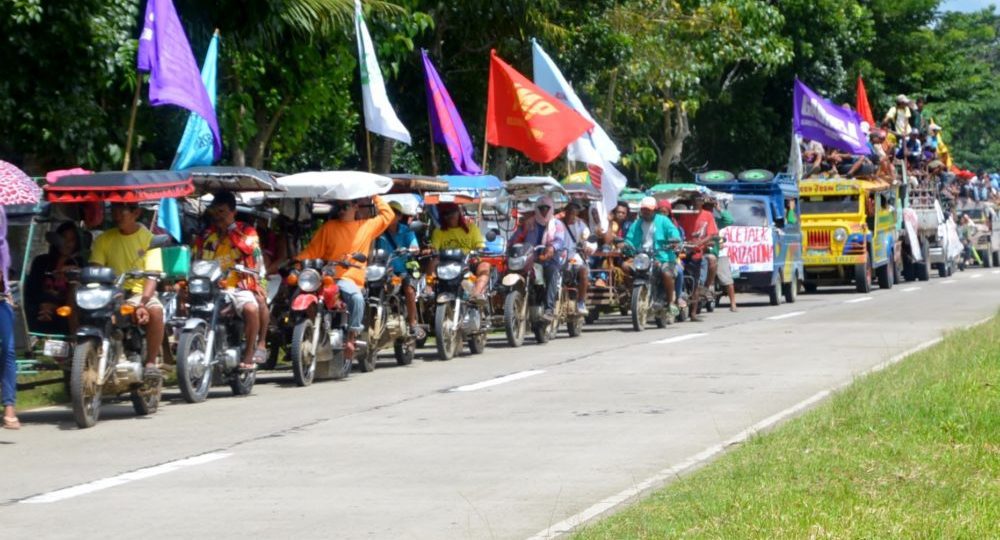 ‘Go back to barracks’: Masbate farmers demand pullout of military from communities

CAWAYAN, MASBATE (BicolToday.com) – “We can’t dry our rice grains. We can’t move and work because they [military troops] are here. They returned to our house today,” said Analyn Sabares. The 38-year-old farmer added she is worried that Armed Forces of the Philippines (AFP) soldiers might have planted explosives and even illegal drugs inside her house.

Analyn was among over 3,000 Masbateños who held a picket-caravan October 25 at the Cawayan municipality in Masbate to condemn the ongoing militarization in the province. The caravan was composed of mostly victims of militarization in Cawayan.

The Masbateño caravan protesters demand that state forces return to their barracks, saying that their presence violates the unilateral ceasefire declaration between the Philippine government and the National Democratic Front of the Philippines (NDFP). While the protest action was ongoing, Analyn received a text message from her neighbors in Brgy. Calapayan, Cawayan who informed her that AFP troops returned to their house looking for her.

According to Analyn, it was the fourth time the military visited her house. On October 23, 12 soldiers went to her house twice and asked her about the presence of the New People’s Army (NPA). “I don’t know what they were talking about, but they kept interrogating me until the next day,” said Analyn, adding that the AFP troops were in uniform and carrying arms.

“Ginagalaw-galaw nila ang bala sa kamay nila habang tinatanong kami tungkol sa NPA (they were moving the bullets in their hands while asking me about the NPA),” she said. Analyn was forced to evacuate with her family. They are currently staying with a relative in a nearby village.

Pedring Delarama, spokesperson of Masbate People’s Organization (MAPO) said that despite a unilateral ceasefire in place, military deployment continues in the municipalities of Palanas, Dimasalang, and Cawayan.

On October 14, more than 4,000 Masbateños staged a protest in Dimasalang where around 100 AFP troops are deployed, according to Delarama. In Cawayan, there are around 60 AFP elements reportedly deployed. “Many families in Cawayan were displaced, threatened and harassed while the AFP troops are operating in the area under Oplan Bayanihan,” said Delarama.

“The military said they are conducting a census so that they can help the poor like us. However, they are asking us different questions not suited to us farmers,” said Ailene, a farmer from Brgy. Cabungahan. The residents, she said, are confused why it is the military doing the census work and not other agencies like the social welfare department or statistics office.

Ailene added that it seems that the military “are looking for something”. Farmers working in the rice fields are threatened since they are armed men, she added. “Kapag walang tao ang mga bahay, tinatadyakan nila ang pinto para mabuksan. Sa ibang bahay naman, kung anu-ano ang ginagawa para sapilitang ipaamin kung nasaan ang mga hinahanap nila. Hindi namin alam ang mga hinahanap nila (If no one is at home, they kick the door open. In different houses, they will do everything to force the residents to tell them where they can find certain people. We don’t know these people),” Ailene said.

Enrique Tumapil, a peasant leader in Masbate said that it seems the military is using the Duterte administration’s anti-drugs campaign Operation Tokhang to “justify and maneuver military operations and its counter-insurgency program in remote areas.”

In fact, Tumapil said the AFP troops are searching houses with K9 dogs and drug-detecting equipment. According to farmer Carilo Mujeres, who joined the picket-caravan, “Nagpasabot yun na ang hinahanap nila droga. (They tell us that they are looking for drugs)”

According to Mujeres, peasants in Masbate are suffering from poverty especially with the drought brought about by El Niño. “We don’t even have money to buy pesticides, and the presence of AFP troops in barangays is additional burden to us especially this harvest session,” he said.

Fr. Rene Invento of Karapatan Masbate urges the Duterte administration to take urgent action on these human rights violations. “AFP troops must go back to their barracks and stop militarizing the communities,” Fr. Invento said. He added that human rights violations against peasants should stop, including falsely charging them with trumped-up crimes. Most political prisoners in the country come from the peasant sector, he said.

According to Vince Casilihan of Bagong Alyansang Makabayan-Bicol, “Peace will never be attained if state forces keep on sabotaging the agreements between the government and the NDFP, and if human rights are continuously violated.”