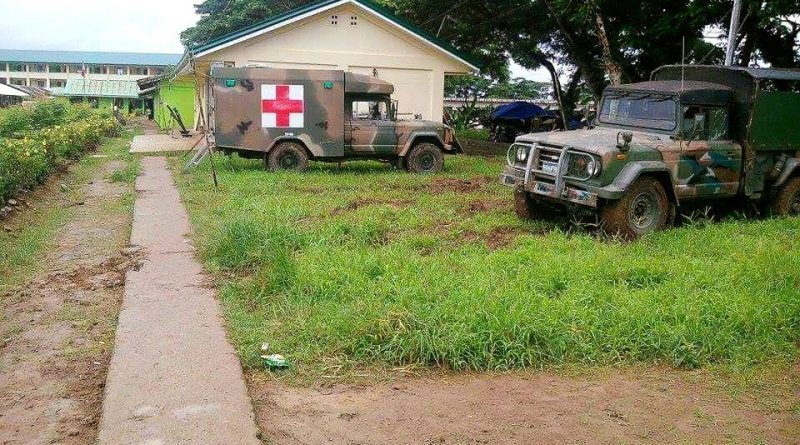 The memorandum cited recent “sporadic acts of violence” in Samar, Negros Oriental, Negros Occidental, and the Bicol Region, said to have been committed by “lawless groups.”

The recent memorandum, issued November 23, directs the Department of National Defense (DND) and the Department of Interior and Local Government (DILG) to increase Army and police personnel in these regions to “prevent such violence [from] spreading and escalating elsewhere in the country.”

According to Katungod, however, Duterte’s declaration of state of lawlessness in Eastern Visayas is of “no objective basis, but is only driven by his greed for power and his armed troops’ thirst for blood.”

“Duterte’s recent order gives the Armed Forces of the Philippines (AFP) an all-out permission to arrest and kill people who are alleged to be members and supporters of the New People’s Army. It is obviously a huge lie that Duterte’s directive seeks to “prevent further loss of innocent lives and destruction of property” as the directive is directly targeted to the peasants, workers, youth and students, lawyers, government employees, and all activists who have been working hard to expose his fascist and anti-people character. His directive is not in any way intended to protect the people but to repress them further from their rights,” said Katungod Eastern Visayas.

Meanwhile, the Commission on Human Rights (CHR) said that the government should first address the roots of violence in the countryside, instead of increasing the number of troops deployed in rural areas.

According to CHR spokesperson Atty. Jacqueline de Guia, “The government’s plan to intensify military presence may even escalate tension and fuel fear in these communities that have been beset with social problems for years.”

“We urge the government to pursue development solutions rather than military approach to truly address the long-standing problems that impact the basic rights and dignity of the people,” Atty. de Guia added.

According to Katungod, even prior to the declaration of the recent memorandum, leader-activists and progressive organizations such as Bagong Alyansang Makabayan (BAYAN), Northern Samar Small Farmers Association (NSSFA), Samahan han Gudti nga Parag-uma ha Sinirangan Bisayas (SAGUPA-SB), League of Filipino Students (LFS), Pulso han Mag-aaram, PISTON among many are being subjected to malicious tagging and intense surveillance.

Katungod also report harassment and threats received by NSSFA Spokesperson Gina Pajanilla. Additionally, two farmers were illegally arrested for allegedly taking part in the killing of San Jose de Buan Mayor Ananias Rebato. The group also noted the encampment of elements of the AFP in several communities in all of the provinces of Eastern Visayas.

“We highly encourage the people of Eastern Visayas to be vigilant in these impetuous days. We encourage everyone to document and report all civil, political, economic, social and cultural rights violations to be perpetrated by the government forces. Lastly, during these dangerous times, it is our highest duty, responsibility, and right to fight and repel the attacks on our democracy,” Katungod ended.

NINE YEARS: We refuse to forget