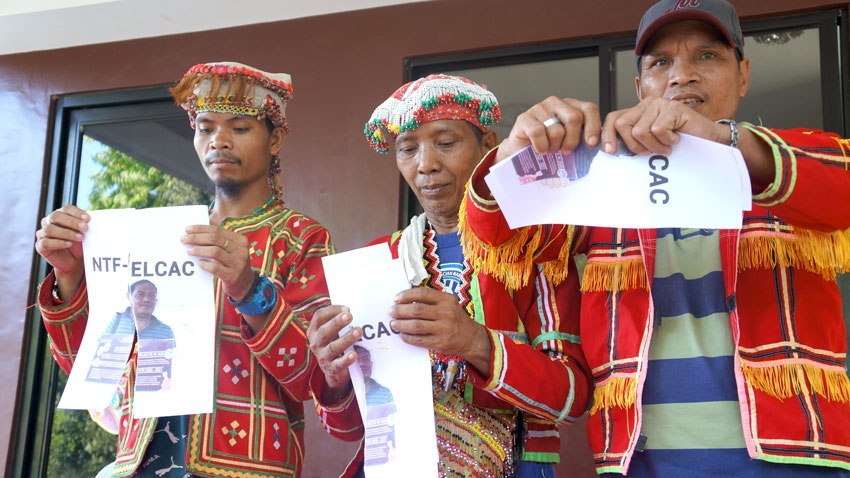 DAVAO CITY, Philippines – The displaced Manobo Lumad from Talaingod and Kapalong and the UCCP Haran are once again charged with trafficking persons and child abuse, charges they say is orchestrated by the lies of the government’s anti-insurgency task force.

On September 15, some Manobo filed before the Davao City Prosecution Office the cases against the administrators of United Church of Christ in the Philippines Haran and other individuals they tag as New People’s Army.

The complaint was based on the case build-up conducted by the National Commission on Indigenous Peoples (NCIP), Police Regional Office XI, Criminal Investigation and Detection Group XI, and the Armed Forces of the Philippines.

The filing was posted on government agencies social media and information websites including the National Task Force to End Local Communist Armed Conflict (NTF-ELCAC) which has constantly red-tagged the Lumad and its supporters as communist rebels.

The NCIP in a statement claimed that the complainants were minors at the time they were “transported, transferred, received, maintained, and harbored” by members of the NPA “for the purpose of engaging them in armed activities, forced labor, involuntary servitude, using them in armed conflict, and for other exploitative purposes.”

It also claimed that the Lumad were brought from their communities to UCCP Haran and also to different parts of the country all the way to Metro Manila, and were allegedly subjected to “anti-military and anti-government indoctrination and firearms training.”

But the displaced Manobo came to the defense of UCCP.

“To set the record straight, the intensified militarization in our communities, forced us to leave and sought sanctuary in UCCP Haran,” the Pasaka Confederation of Lumad Organizations in Southern Mindanao Region, of which the Talaingod Manobo are members, said in a statement released September 18.

Pasaka said these charges are “purely trumped-up and baseless” similar to the charges of kidnapping and serious legal detention filed against their secretary general Kerlan Fanagel and 14 activists on May 2015 known as Haran 15. The case was dropped by the Davao City Prosecution on September 8 of that year for lack of evidence.

The Lumad group believes this filing of same charges are meant by the NTF-ELCAC to “divide the Lumad to further their interest that is to destroy the tribe’s unity through trump-up charges filed by the inutile NCIP against us and church people, that shows their longing to silence us and cover up our legitimate demands to defend our ancestral domain”.

The UCCP has yet to release a statement, but they had reacted defending Southeastern Mindanao Bishop Hamuel Tequis who was blatantly tagged in a poster as a member of the Communist Party of the Philippines (CPP).

“This is obviously a handiwork of those who aim at besmirching the reputation and integrity of peace and justice advocates as well as those in the religious sector who are engaged in the work of peacemaking and human rights,” the UCCP Council of Bishops said in their previous statement.

The Pasaka called on the public to condemn the NTF-ELCAC for what they say is an orchestration of attacks on their tribes.

“This is nothing new to the Lumad who have always been disrespected through fake surrender of Lumad and farmers which became a source of corruption for the NTF-ELCAC,” the group said. “They also forcibly recruit our fellow Lumad into Alamara and Cafgu to use them as pawns to fight us and join in military operations.”

“We call on those who had the chance to know us, to intensify the call to junk these trumped up cases against us and our sanctuary,” the Pasaka said. Ken E. Cagula/davaotoday.com