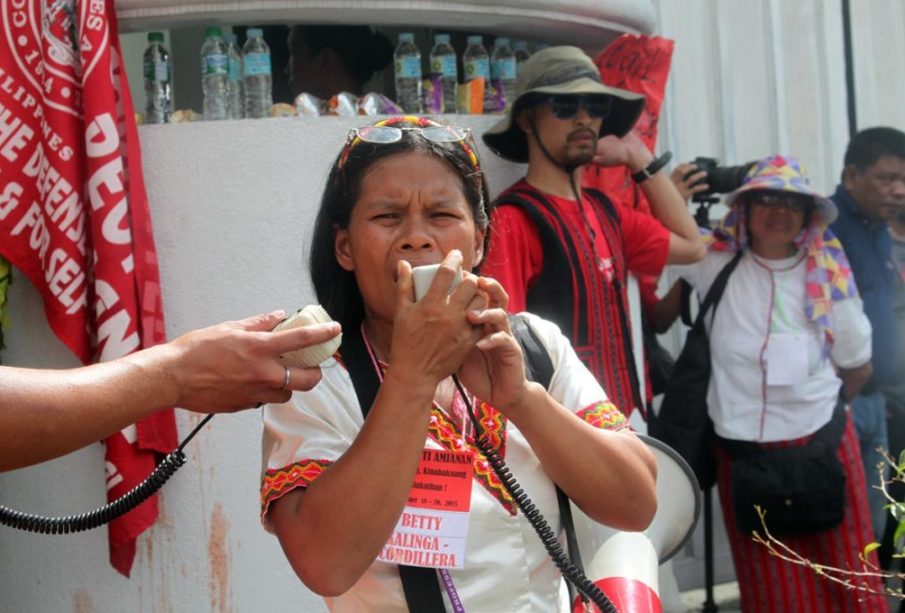 BAGUIO CITY — The dismissal of the criminal charge against red-tagged indigenous woman leader Beatrice Belen is a victory for the people, said her attorney. This is the latest among the string of charges leveled against activists in Northern Philippines dismissed by local courts for lack of evidence.

Lawyer Ma. Catherine Salucon emphasized that the dismissal of Belen’s illegal possession of explosives case once again proved that justice prevails with people’s vigilance and determined fight for justice.

“We have proven once more that the vicious forces of this fascist regime could not just readily tinker with our fundamental rights,” she said.

The lawyer added that Belen’s case also proves that red-tagging and harassments, surveillances, and death threats against activists and human rights defenders will continue as long as this climate of impunity exists. But this challenge is not insurmountable, she said.

“As we fight for our rights, strive for the common good and the rule of law, rely on our collective strength as a people, achieve just peace, stand for the poor, the oppressed, with women, human rights defenders and the marginalized which Manang Betty and the countless victims of state terror embody, we will succeed, the people will succeed,” Salucon added.

After almost four months in jail, Belen walked free on February 12 after Judge Randy Bulwayan of the Regional Trial Court Branch 39 in Lubuagan town ordered her release. He also dismissed her case for lack of evidence.

The magistrate ruled the three rifle grenades allegedly found at Belen’s residence are inadmissible as evidence. He said the items “were neither particularly described in the (search) warrant nor seized under the plain view doctrine.”

“Accordingly, with the inadmissibility of the three rifle grenades seized from the house of the accused Beatrice Belen y Magwin a.k.a. Betty, there is no more evidence to support her conviction; hence, the instant case is hereby ordered dismissed for lack of evidence,” the February 11 ruling said.

On October 25 last year, police and army troops swooped into Belen’s residence in Barangay Uma, Lubuagan, and searched her home and premises. The government forces allegedly found three rifle grenades outside her house, leading to her arrest and detention. Before the raid, government troops repeatedly accused her of supporting the New People’s Army (NPA). The police and military have also continuously tagged her organization, Innabuyog-Gabriela, without substantial proof, as a front of the Communist Party of the Philippines.

Innabuyog-Gabriela stated that the court’s decision proves that Belen is innocent and a victim of political persecution. “This is a victory for everyone who spoke and demanded the dropping of trumped-up charges filed her,” the progressive women’s group stated.

The group also urged everyone to continue to demand justice for Belen and the dropping of all fabricated cases against activists. They also called for the release of all political detainees.

Belen is the former vice-president of Innabuyog-Gabriela and currently serves as a regional council member of the progressive women’s group. She led Uma villagers in opposing Chevron Energy Company’s geothermal energy project in Kalinga from 2012 until her arrest. In 2018, Belen received the “Gawad Bayani ng Kalikasan” from the Center for Environmental Concerns for her advocacy in protecting the environment against destructive projects.

Belen is not the only activist slapped with fabricated cases in Northern Luzon since Duterte came to power.

The latest case is the cyberlibel complaint filed by Cordillera Regional Police chief R’win Pagkalinawan against Cordillera People’s Alliance Secretary General Sarah “Bestang” Dekdeken. The region’s top cop alleged the CPA leader’s statement during a press conference on January 14 “is degrading and destroying (his) moral reputation as the head of the Cordillera police and as a public servant.”

The allegation against Dekdeken came barely a month after CPA chairperson Windel Bolinget voluntarily submitted himself to the National Bureau of Investigation (NBI) Cordillera. He also asked for the agency’s protection to face the “fabricated” murder case after Pagkalinawan reportedly issued a “shoot-to-kill” order against him if he resisted arrest.

Bolinget, along with 10 other activists, was accused by the police of killing Garito Tiklonay Malibato, a Lumad activist murdered on March 21, 2018, in Kapalong, Davao del Norte. However, the victim’s kin and organization, Karadyawan, blames the military-backed paramilitary Alamara for his death. Three of those accused are Cagayan Valley activists — peasant leader Reynaldo Garneng, human rights advocate Jackie Valencia, and rural missionary Agnes Mesina.

In September 2020, Branch 2 of the Regional Trial Court in Abra dismissed the rebellion charges against environmental activist and Northern Dispatch managing editor Sherwin De Vera filed by the 41st Infantry Battalion of the Philippine Army. The court said “the State had no evidence to present” to back the army’s allegations that he is part of the New People’s Army unit they encountered on January 30, 2013. The Department of Justice (DOJ) included his name in the court petition to declare the CPP and NPA as terrorist organizations without vetting intelligence agencies’ information. The DOJ eventually dropped his name from the list.

After almost a year of incarceration, the late Judge Mario Anacleto Bañez of Branch 25 of the Regional Trial Court in Tagudin, Ilocos Sur, also acquitted Cordillera community health Rachel Mariano. The military’s 81st IB accused her of murder and frustrated murder charges. Like De Vera, government soldiers accused her of taking part in an NPA attack in Quirino, Ilocos Sur, in October 2017. The judge ruled that the evidence the army presented “are insufficient and doubtful to sustain [a guilty] verdict”.

Belen said she was not able to sleep the night she learned of her release. “I tossed and turned out of excitement and happiness,” she said.

Belen said that the first thing she wanted to do was hug her two grandchildren, but because Tabuk City is under ECQ, it was hard to move around. At the moment, they are yet to reunite since her family and colleagues believe the threat against her safety lingers.

She expressed her gratitude to the National Union of Peoples Lawyers (NUPL) for helping her with her case and to everyone who spoke up for her.

“My endless thank you to those who helped me with the trumped-up charges filed against me. I thank our lawyers from the NUPL who helped me. I cannot put in words how thankful I am to them. All of you brothers and sisters, colleagues in the women’s organizations, especially Innabuyog, CWEARC, and others, I cannot name you all. I cannot express how thankful I am to all of you,” Belen said in a video message.

“Let us continue the fight. Let us continue fighting the unjust policies and actions of our government that abuses poor women,” she added. # nordis.net