Land reform, workers’ welfare: ‘Heart and soul’ of peace talks up next 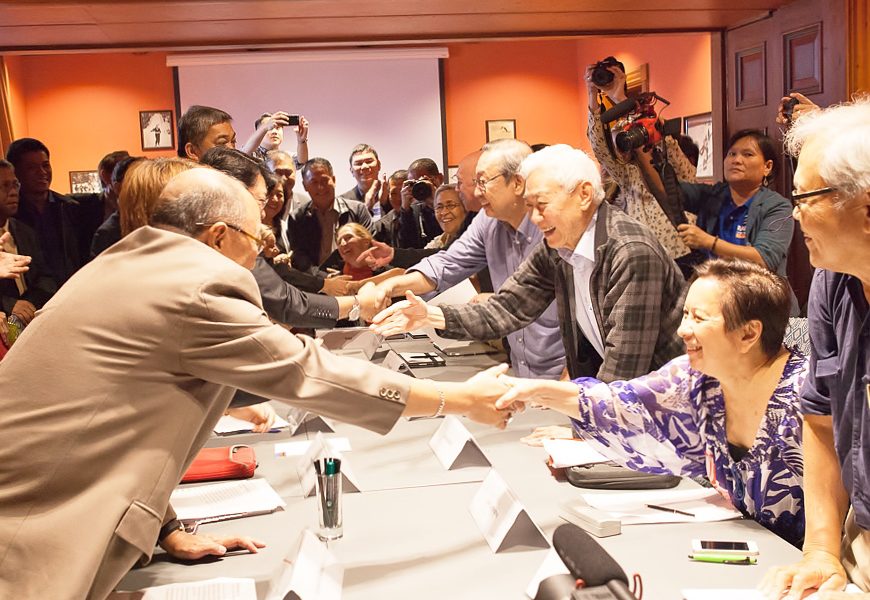 THE FIRST ROUND of formal peace talks between the Philippine government and the National Democratic Front of the Philippines (NDFP) ended August 26 in Oslo, Norway and was hailed as “unprecedented” by the negotiators.

Jesus Dureza, presidential adviser on the peace process said, “Many of us have been here doing this before. But I think we are looking at a very opportune opportunity that we can finish off what we have started a long time ago.”

Peace talks between the government of the Philippines (GPH) and the NDFP have been stalled for almost a decade. But this time, both sides agreed on all six points raised for the first round of talks:  reaffirmation of previously signed agreements, reconstitution of the Joint Agreement on Safety and Immunity Guarantees (JASIG) list, fast track of the peace negotiations, releases of political prisoners, amnesty proclamation and ceasefire.

But clearly anticipated by both panels is the next item on the negotiating table: the agenda on socio-economic reforms, which both panels agree is “the heart and soul” of the peace talks.

Proposed social and economic reforms will be negotiated to form the Comprehensive Agreement on Socio-Economic Reforms (CASER). According to the NDFP, social and economic problems like landlessness, inequality, and social injustice are at the very root of the armed conflict. The NDFP peace negotiators will bring the issues of land reform, national industrialization, improvement in workers’ welfare, and national sovereignty, etc. to the negotiating table.

“(This is) good news to the Filipino people,” said NDFP chief negotiator Luis Jalandoni. “Land reform and other social and economic reforms will be seriously undertaken. So, the farmers of Hacienda Luisita and Hacienda Looc may be gladdened that these steps are going forward.”

“The reciprocal working groups will exert their best effort to achieve an agreement on socio-economic reforms within six months. So there will be intense work between the two working groups,” said Jalandoni.

The agenda on socio-economic reforms (or SER) is considered the main component of the peace talks. According to the NDFP, negotiations on this agenda are meant to lay the ground for resolving armed conflict.

The CASER is the most important item in the peace negotiations. Both sides need to agree on the socio-economic reforms, as well as the political reforms, before they could significantly talk about the remaining agenda and arrive at a final peace agreement.

The NDFP first submitted its version of the CASER draft to the GPH in 1998. The draft, it said, was a result of consultations with “revolutionary forces, NDFP consultants and the Filipino masses.” Discussions between the two panels on the CASER stopped after peace talks broke down in 2004. When the formal talks under Pres. Benigno Aquino III resumed in 2011, the peace panels did not reach discussions on socio-economic reforms.

Among the proposals outlined by the NDFP in its CASER draft is creating conditions for better opportunities for Filipinos such as jobs, free education and medical services, cultural development, etc. Through these, the NDFP believes that Filipinos “can develop their full potential and lead meaningful lives.”

In the NDFP’s proposed draft, the main programs to address the roots of the armed conflict are land reform and national industrialization. “Free land distribution is the cutting edge of the CASER in putting an end to social injustice,” said NDFP consultant Randall Echanis, a member of the reciprocal working committee for SER.

“Meanwhile, national industrialization is the key to breaking free from economic dependence and building a modern and healthy economy that will secure jobs for the masses, and provide their basic needs.”

In discussing national industrialization with the GPH, Juliet de Lima, chair of the reciprocal working committee for the SER, stressed that, “The term ‘national’ is important to us because we use it to mean that industrialization should be for the people, not just for profit-taking by foreign capitalists.”

“All the industrialization they say we have now made us an exporter of goods and provider of services. We want a self-reliant economy,” she explained.

Admittedly, the NDFP believes that addressing the root causes of the armed conflict in the country is a “huge task”. But according to Echanis, “There should not be any shrinking from it if we want to reach an agreement on resolving these roots.”

For Jalandoni, the commitment to fast track talks on the CASER and other remaining agenda should be reason for joy.  “There will be accelerated negotiations on socio-economic reforms like land reform, which will benefit 75% of the population, and other fundamental reforms that will benefit the people.”

“The Filipino people are invited to give their support to the peace talks. The people’s participation and support is essential to the success of this effort,” Jalandoni said.

Various groups agree that the formal peace talks opens an opportunity for the public to propose concrete recommendations on how to address poverty and other social and economic problems.

According to Renato Reyes of Bagong Alyansang Makabayan, “We support an agreement on socio-economic reforms that would truly uplift the plight of our people, majority of whom are peasant and workers.”

“A major step towards a just peace has been taken, and we are very happy,” he said.

Meanwhile, research organization IBON welcomes the peace talks as a venue for both parties to discuss how to improve the country’s economic policies and foster development. IBON said it hopes that the negotiations will tackle the government’s damaging neoliberal policies and result in measures that would develop the national economy and improve Filipinos’ welfare.

“Broad public participation and support for the talks will greatly strengthen and improve people-centered polices and the country’s prospects for development,” the group said in a statement.

Aside from fast-tracking the peace negotiations, another milestone in the Oslo talks is the reaffirming of previous agreements between the GPH and NDFP, which past government panels under Pres. Gloria Arroyo and Benigno Aquino refused to recognize during their term.

Among the affirmed agreements are The Hague Joint Declaration, which sets the framework and the substantive agenda of the GPH-NDFP peace negotiations; the JASIG that gives safety and immunity guarantees to NDFP consultants and staff participating in the peace talks; and the Comprehensive Agreement on Respect for Human Rights and International Humanitarian Law (CARHRIHL) that binds both parties to observe human rights principles in the conduct of the armed conflict.

According to Rey Casambre of the Philippine Peace Center, reaffirming these agreements is significant because it puts back on track the peace negotiations that have been off-course under the Arroyo and Aquino administrations. “Now, the basis for tackling the substantive agenda that will address the roots of the armed conflict and lead to a just and lasting peace has been restored,” he said.

He added that the successful outcome of the Oslo talks adds to the reservoir of confidence and goodwill between the two sides, as shown by the unilateral ceasefires declared by the GPH and NDFP. Peace advocates are now also looking forward to the declaration of general amnesty for political prisoners and for the release of prisoners who are sick, elderly and overly detained.

With the Oslo talks ending in high hopes, Edre Olalia, legal counsel for the NDFP, called the first formal peace talks “a big firm step that was made possible by a mutual desire to reach a destination.”

“Yet as we celebrate, as we should, we have to be realistic, manage our expectations and keep our hopes intact. After the very cordial negotiations is the big work and long journey still ahead for a real and meaningful peace that is not only just but also lasting,” said Olalia.

Presidential adviser Dureza, for his part said, “There is still a lot of work to be done ahead. But as the President says let’s all stay the course together no matter what.”

“We thank the bigger stakeholders out there that are very anxious about a final settlement that will bring about sustainable and lasting peace in the land,” he said.