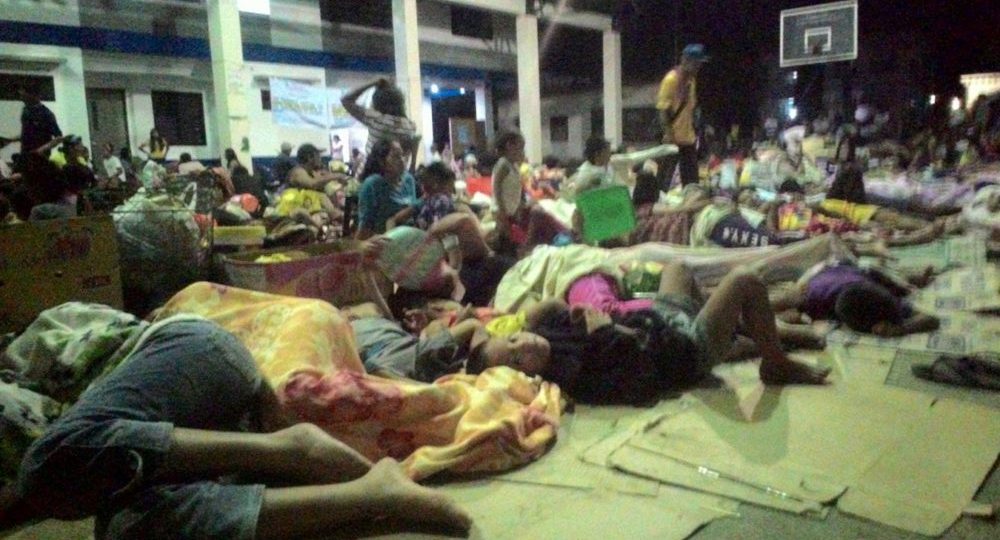 A total of 2,357 residents from 13 villages in Calbiga and Pinabacdao, Samar have fled their homes and are now temporarily staying at the Calbiga town gymnasium after intensified military operations in their communities.

The evacuees–composed of 949 children, 130 senior citizens, 29 pregnant women and 3 persons-with-disabilities–have received initial food packs from the Department of Social Welfare and Development. They will continue to seek refuge at the town center until military troops pull out from their villages.

According to Lina Tabuyan, local coordinator of People Surge, an organization of Typhoon Haiyan survivors, they started evacuating from their homes last April 4, as hostilities escalated between the Armed Forces of the Philippines (AFP) and the New People’s Army (NPA).

Since August last year, troops under the Philippine Army’s 87th Infantry Battalion Philippine Army of the 8th Infantry Division have encamped in or near the houses of farmers in several villages in Calbiga and Pinabacdao.

Residents say that they are being used as “human shields.”

“We will only go back to our communities if the LGU and the AFP will sign an agreement saying that the military will pull out and no longer camp in or near our houses. Until there is no agreement, we will stay here,” said Tabuyan.

In an interview with Eastern Vista, evacuee Marilou Dacallas, 30, said, “We are afraid because the military is at the center of our barangay. The order of their batallion commander is for them to stay in our barangay. We told them to stay out but they refused. We are afraid of their presence because if militarization will continue, the farmers will definitely starve.”

She related that she evacuated carrying her two young children in one basket, “with no cover from the rain.”

“If this militarization will continue, hunger will fall on us farmers”

According to KAPASCA, on March 13, at least twelve fully armed 87th IBPA soldiers arrived at the barrio in in Brgy. Canbagtik, Calbiga at around noon. Their commanding officer, identified as 2nd Lieutenant Benjie Cabaluang, asked for the village officials’ approval to stay in the “dance hall,” but the village officials said that they could only do so if the barrio folks will allow it in an assembly.

The assembly was called for on March 19, presided by the same commanding officer. “During the assembly, the military officials hurled cuss words like ‘putang ina’ and ordered all women including the village captain to stand up. He commanded those who are ‘members of the NPA’ and those ‘who attend rallies’ to raise their hands. He then threatened afterwards that if he is killed by a sniper at the moment, the barrio will face retaliation by the Army,” KAPASCA said.

During the assembly, military personnel allegedly distributed leaflets as “invitations for them to surrender their firearms.”

The evacuees said that gunshots were heard near the Army encampments on April 4 and 5, finally triggering the evacuation in Brgy. San Mauricio and in nearby communities of Literon, Hubasan, Burong and Canbagtic.

According to KAPASCA and KAPAPIS, the mass evacuation came in the wake of a string of human rights abuses committed by the military.

On March 9, at around 9 AM, soldiers of the 87th IBPA conducted a military operation in Brgy. Magdawat in Pinabacdao, Samar while farmer Mark Allan Solayao was clearing his farm lot. The operating troops encountered him and forced him to act as a “guide” for the AFP. Also on that same day, the same troops pointed a gun on farmer Jovito Labutin, Jr., another resident of Brgy. Magdawat, whom they encountered in his farm lot.

Since last year, residents have said that village tanods are being made to “guard” the encamped military troops every night, according to KAPAPIS. The group also said that “young children…are made to fetch water and gather firewood for them.”

The evacuees are asking for immediate government aid to cover their medical and food needs.

The farmers groups expressed frustration that despite the success of the recent round of peace talks between the Government of the Republic of the Philippines (GRP) and National Democratic Front of the Philippines (NDFP), President Duterte “has allowed the militarization” of their communities.

Forward deployment of AFP troops under the counter-insurgency program Oplan Kapayapaan allegedly violate previous GRP-NDFP agreements such as the Comprehensive Agreement for the Respect of Human Rights and International Humanitarian Law or CARHRIHL.

With reports from Eastern Vista and Marissa Cabaljao