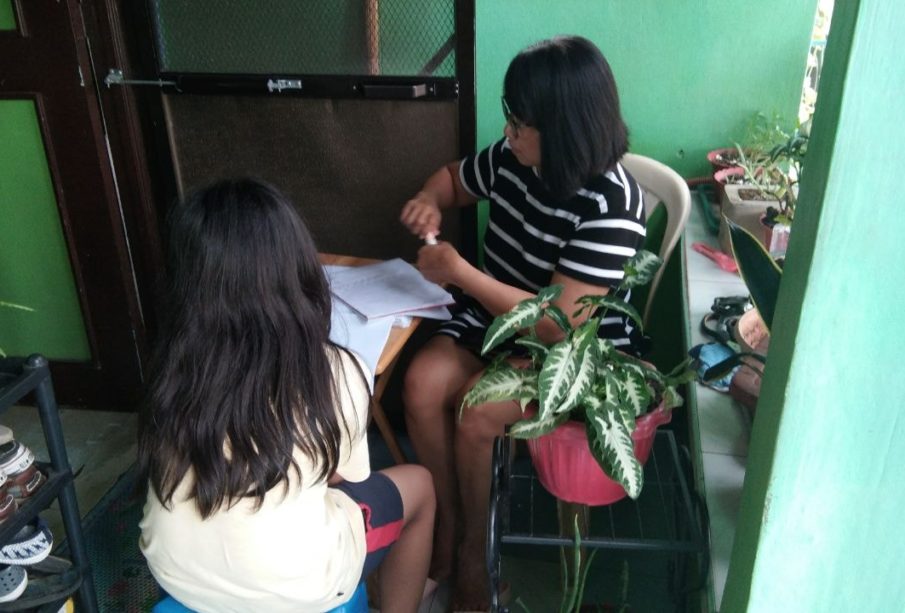 ACT Teachers Rep. France Castro helps her fifth grader neighbor with a short lesson on divisibility by 4, 8, 11 and 12. (Photo courtesy of Rep. Castro)

MANILA – Last week, Bulatlat’s very own Martin’s Purrspective came up with a comic strip on how students, mothers, and teachers are faring on the first week of the ongoing distance learning. But what happens when the mother is also a teacher and a lawmaker batting for the rights of Filipino students and teachers?

Even before the pandemic, Castro, a former Mathematics public school teacher, has always been hands-on to her son’s schooling. Whenever he needs help with his lessons, he would send screenshots to her mother, and the lawmaker would be quick to give him a call. But with the pandemic at hand, Castro said she has more time on her hands now to check on her son, despite the hectic schedule in the 2021 budget deliberations.

“He really finds it frustrating. He was very excited on the prospect of distance learning but ended up really frustrated because of the connectivity issues,” she told Bulatlat in a phone interview.

Castro’s son is a Grade 12 student in a public school here in Metro Manila.

Last week, his son logged in to the livestreaming of their physical education class. But due to internet connectivity issues, the students ended up waiting for the recorded class to be uploaded instead. The same connectivity issue happened during his literature class.

As a mother, Castro said she consoled her son, telling him not to be frustrated easily as she shared the experience of other schools who are going through far worse. “Relax ka lang,” she would tell her son.

But as a lawmaker, she also uses her own experience to look into how policies and programs of the education department are being implemented on the ground and how students are faring.

Castro said is aware of the viral screenshots of erroneous modules and how teachers are usually blamed for these. She pleaded to the public not to shame teachers who were rushed into doing these modules and were obviously not provided with rigid validity and reliability tests.

“Didn’t the DepEd brag that they were ready with the modules? But until now, teachers are still on the ground, finding ways to print out these modules and distribute them,” she said.

So the next time you see Castro issuing all these pronouncements and criticisms on the education department’s distance learning, you know she knows what she’s talking about.

Stop the attacks on Northern Dispatch

Petition launched to save Anti-Chico Dam heroes’ monument from demolition