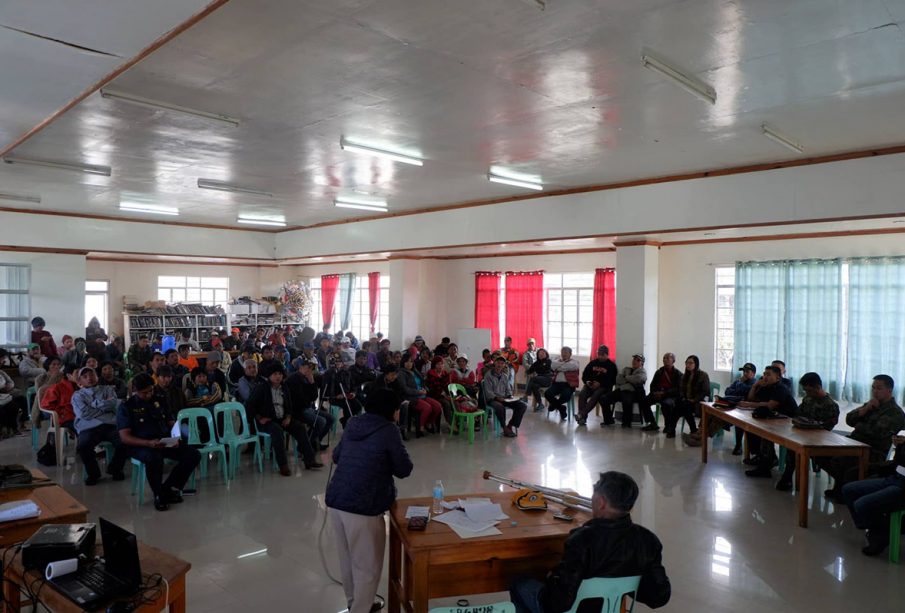 SAGADA, Mountain Province — The municipal police chief of this tourist town admitted they were “following orders” when they distributed flyers and posted on Facebook that red-tagged various people’s organizations in the municipality.

“We do not owe a public apology because we are following a directive, and we have basis for what we did,” Municipal Police Station chief-of-police Senior Inspector Basilio Hopdayan said.

The police official made the remark during the dialogue between the police and people’s organizations on February 17 at the Sagada multi-purpose hall.

He also denied that the distribution of flyers is an act of red-tagging. According to him, the purpose was “to warn the organizations that they may be used or are allowing their organizations to be used” by the CPP-NPA.

“The flyers did not intend to warn the organizations. It contained malicious accusations about them being so-called fronts and recruiters of the CPP-NPA,” she pointed out.

(Do not be deceived because these groups support and a member of the CPP-NPA-NDF led by Joma Sison to destroy the Strong Government of the Philippines using violent revolution. Fight the communists, NPA, and its fronts so that we can leave prosperously and peacefully).

Meanwhile, Police Major Jerry Haduca of the Mountain Province Police Provincial Office apologized to the organizations. He also assured the parties that they will correct their mistake. According to Haduca, they will verify the content and sources of information on the Facebook posts and flyers. The official also admitted that they failed to monitor the issuance and distribution of the materials by their men.

Despite the apology made by his superiors, Hopdayan did not retract his statement. However, in an interview after the dialogue, he said they would also review the online and offline content of their information materials. He also reiterated that they were only following orders.

CPA Chairperson Windel Bolinget spoke on behalf of other groups present in the dialogue and demanded a public apology form the Sagada Municipal Police.

“The posts on Facebook and other social media bearing the same message should be taken down,” he stressed.

Bolinget reminded the police of the difference between CPP-NPA and civilian organizations. He underscored that red-tagging of people’s organizations puts the safety and security of their members at risk. He also urged the local government unit to pass an ordinance denouncing extrajudicial killings, red-tagging, and political vilification.

“The flyers and Facebook posts circulated by the MPS are making us open targets that could lead to extrajudicial killings if not corrected.”

Meanwhile, Audrey Corce of Innabuyog stressed that the fighting for social change is not terrorism.

“There is nothing terroristic about standing for women’s rights and welfare. We are not terrorists. We are activists for social change,” she pointed out.

Around 90 individuals participated in the dialogue, including the members of the CPA, Innabuyog, Montanosa Research, and Development Center, Inayan Watch, and APIT TAKO Montanosa. Mayor James Pooten facilitated the talks. Some members of the municipal council, barangay officials, church ministers, residents of Sagada, and representatives of the 54th Infantry Battalion of the Philippine Army were also present. nordis.net