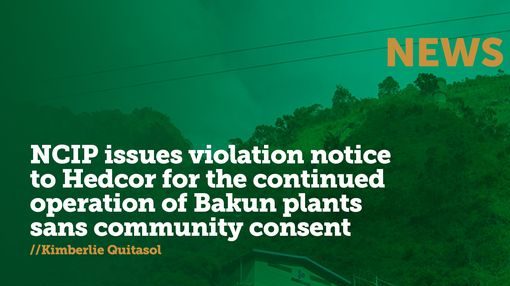 BAGUIO CITY — After repeated demands from the people of Bakun, the National Commission on Indigenous People-Cordillera Administrative Region (NCIP-CAR) finally issued a notice of violation (NOV) to Hedcor, Inc. for the continued operation of its three hydro-electric power plants (HEPP) in Bakun, Benguet without the indigenous people’s consent.

NCIP said Hedcor’s continued operation has “no legal justification and is in violation of rights of the indigenous people” with the issuance of the Resolution of Non-Consent. The office cited Section 7 (b) and Section 57 of Republic Act No. 8371 or the Indigenous Peoples Rights Act.

Section 7(b) pertains to the right of the indigenous peoples to determine the utilization and development of the resources within their territories. The provision states that community members have “the right to an informed and intelligent participation in the formulation and implementation of any project” that will affect their ancestral domain.

The other cited provision, Section 57, contains how other entities outside the indigenous peoples’ community can exploit the resources with their territories. Development and utilization, according to law, by non-IPs are limited to 25 years and renewable for the same period. The law also requires the proponent to get the community’s approval of the project and its operation according to their traditional processes.

The notice further stated that the continued operation of Hedcor’s three HEPPs is an “intrusion within an ancestral domain” of Bakun indigenous peoples.

NCIP warned Hedcor that it would be “constrained to act accordingly” if the company fails to address the violation with the prescribed period. The commission’s action would include the issuance of a stoppage order against the company.

Hedcor is given 10 working days from the receipt of the notice to address their violation. The company received the document on June 7.

In a letter in May, NCIP-CAR Regional Director Marlon Bosantog directed the company to return the land occupied by Hedcor’s facilities to the Bakun people.

The order came after the Bakun Indigenous Tribes Organization (BITO) and community elders’ issued a Resolution of Non-Consent in April. In the same month, Bakun folk issued another Resolution asking NCIP for a cease-and-desist order (CDO) to Hedcor.

The people of Bakun reiterated their demand for a CDO against Hedcor during the June 1 community dialogue with NCIP Chairperson Allen Capuyan together with three other commissioners.

In an interview on June 9, NCIP-CAR lawyer Harriet Abiadang explained that the June 1 assembly and the June 7 notice address the Bakun people’s demand for a CDO. She said NCIP would decide whether to issue a CDO or not based on the company’s response.

Abiadang further explained the Resolution of Non-Consent issued by the Bakun people concluded the FPIC process. She added that the CDO is necessary to stop Hedcor’s operation. However, the CDO does not bar the company from applying for another round of FPIC after six months.

In a June 10 letter to Bakun Vice Mayor Edward Buscol, Hedcor Vice President for Operations and Maintenance Leo Lenbo D. Lungay said that they respect the issuance of the NOV. He said they would coordinate with NCIP to address the issue within the prescribed period.

“As we adhere to the process of the NCIP in the issuance of the NOV, we also reiterate our sincere desire to resolve this issue with the indigenous people of Bakun through dialogue,” Lungay said.

Hedcor requested to hold the talks with Bakun officials, BITO, and community elders on June 15.

According to Bakun Councilor June Suni-en, based on initial talks among officials, most of them are inclined to wait for the NCIP process to take its course. #