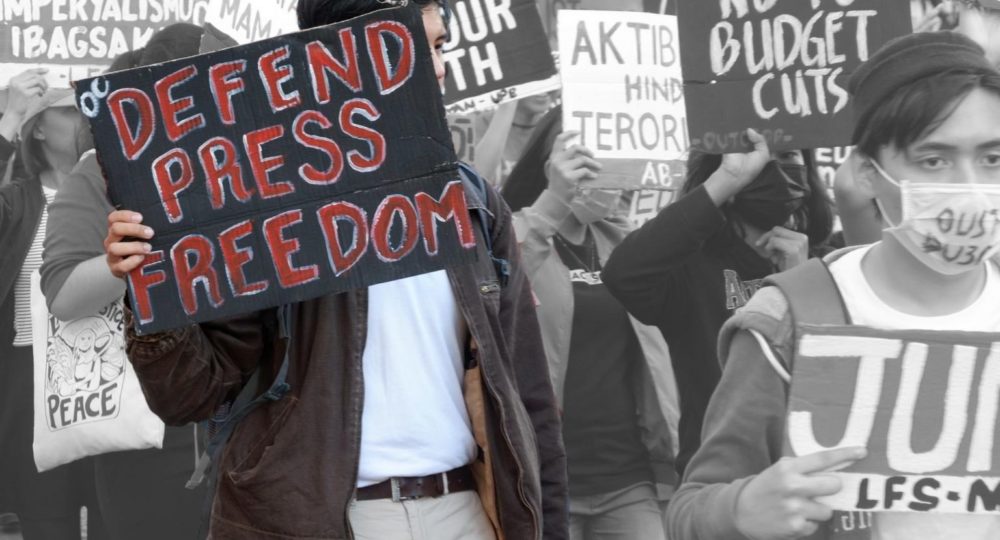 On the legal harassment against Northern Dispatch staff

Libel has always been a tool of government officials and influential individuals to stifle freedom of expression and silence critical media organizations. As a criminal case, libel is also a used to discredit media institutions and personalities who put out exposé against the powers that be. The already constricted space for a free press in the country was further reduced with the conviction of Rappler Executive Editor Maria Ressa and non-renewal of ABS-CBN’s franchise.

Thus, it is not surprising that after being the subject of red-tagging and disinformation by the government and their online trolls, members of Northern Dispatch (Nordis) are now the subject of legal harassment and persecution.

On September 23, the Office of the Provincial Prosecutor of Benguet filed a cyber-libel case against our volunteer reporter Khim Abalos.

Pagkalinawan alleged that they violated Article 154 (1) of the Revised Penal Code concerning Proclamation 929 (declaration of a state of emergency in the country due to COVID-19) and Republic Act No. 10175 (Cybercrime Law). The primary violation cited is on the “Unlawful use of means of publication and unlawful utterances,” in particular the publishing of false information as news that “endangers public order or cause damage to the interest or credit of the State.”

The court dismissed the case on July 28, 2020 for lack of jurisdiction.

The prosecutor refiled the case and same information at the La Trinidad Municipal Trial Court on August 18, 2020. Again, the court dismissed the case for the same reason.

Instead of refuting the dismissal to higher court authorities, the prosecutor revised and elevated the charges to cyber libel. The prosecutor also removed Karapatan and Quitasol, from the case. It is also important to note that our colleagues never received subpoena from the Office of the Prosecutor in the said charges to call their attention and give them a chance to contest the allegations.

Even before these charges, Nordis staff have been the target of terrorist tagging, harassment and disinformation. The attacks aimed to intimidate the outfit and discredit its more than three decades of unwavering commitment to serve to the people of Northern Luzon. No less than NTF-ELCAC spokesperson Lt.Gen. Antonio Parlade, Jr. has accused Nordis of being a front organization of communist rebels. Also, at least two police stations – the Baguio City Police Office and the La Trinidad Municipal Police Office, have red-tagged our members.

Abalos, in particular, has been the subject of terrorist tagging and harassment even when he was still a student leader in the University of the Philippines Baguio. The pressure to isolate and silence him intensified after joining Nordis this year, through online troll attacks, malicious tarpaulins hanged in the different areas in Baguio City, the latest being the charges against him.

The legal battle we are about to face is a fight against the blatant harassment of our colleague. It also serves as a warning to the local media community that critical reportage will earn the ire of those in power. We stand with our other media practitioners who are also facing similar cases and those detained for trumped-up charges.

With the worsening state of media freedom and human rights in the country, and the wanton disinformation and red-tagging campaign of the government against its critics, we have no recourse but to do more than holding the line. We must fight back with reports that expose attacks on life and livelihood of the people, fact-checking of information, and incisive pieces on state policies and actions. As an alternative media and member of the Fourth Estate, we must amplify people’s concern and aspirations and vigilant of the government.

We join the wider community in fighting for freedom of expression and of the press. We appeal to all freedom-loving citizens to join us in defending our right to know and to speak.

Despite the escalating attacks under the Duterte administration, Nordis remains steadfast with its mandate to bring stories that matter – the people’s struggle for genuine freedom and social change. #

Groups accuse Duterte of lying before UN on human rights

Movement launched in search for justice for slain Bacolod activist