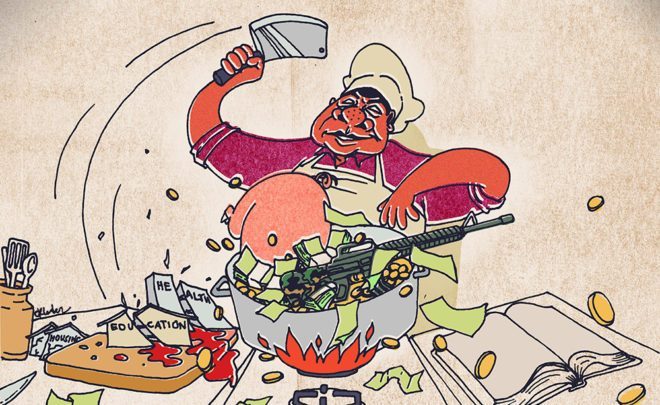 THE DUTERTE administration is rehashing the same old recipe in preparing its P3.757 trillion proposed national budget, as it is laden with pork barrel while at the same time scrimping funds for social services.

Legislators from the Makabayan bloc in the House of Representatives reiterated that while there are delays in the Congress deliberations of the national budget, the “primordial issue” is still the main budgetary priorities of the government.

But they noted how social and economic services will sustain huge cuts in the proposed budget and how huge allocations for patronage politics through pork and for the police and military reveal the priorities of the national government in 2019.

“We are confident that because this budget is intended to implement more projects for congressmen and legislators as well, it will be passed on time,” Presidential Spokesperson Harry Roque himself said in July.

Roque’s statement, according to critics, only affirmed that the proposed 2019 budget is laden with funding for projects of legislators, otherwise known as pork barrel.

About a third of the 2019 national budget, or P1.69 trillion is in fact under “Special Purpose Funds” (SPF) an item which has long been criticized for being one of the main sources of pork funds as said funds are lump-sums lacking itemization.

Some of the funds under the SPF will receive substantial increases, including the P2.86 or 9-percent hike in the allotment for the Local Government Support Fund, and the additional P400 million for the Calamity Fund.

Senators have declared to fight for the removal of the billions of pesos in pork and vowed to reject the pork-laden proposed national budget.

The submitted 2019 proposed budget, on the other hand, made huge cuts on social services and productive enterprises.

The budget for personal services, or the part of the budget for salaries and benefits of government employees, will nominally increase from P1.061 trillion to P1.185 trillion, but this is primarily due to the implementation of the fourth tranche of the Salary Standardization Law 4 and the increase in the base pay of military and uniformed personnel.

In fact, the total compensation for civilian personnel will decrease by P3.2 billion, due to cuts in the items “Lump-sum for Compensation Adjustment” and the “Special Hardship Allowance for Teachers.”

Meanwhile, several items under the Maintenance and Other Operating Expenses (MOOE) will also decrease. This includes a P3.1 billion budget cut for repairs and maintenance.

Capital outlays, or the budget for building new buildings and procuring new equipment, will also decrease by P232.3 billion or by 23 percent. In fact, zero capital outlay is allotted for housing, health facilities in several hospitals, and the building of centers and homes for senior citizens, children, and persons with disabilities.

Despite the passage of Republic Act No. 10931 or the Universal Access to Quality Tertiary Education Act, 63 out of 114 state universities and colleges are also set to sustain a reduction amounting to P584 million in 2019.

Kabataan Partylist Rep. Sarah Elago, along with over a hundred lawmakers, have filed House Resolution No. 2165 on September 10 to urge the House Committee on Appropriations to restore and even augment the budget for the country’s public tertiary education system.

The Alliance of Health Workers (AHW), meanwhile, pointed out how instead of increasing the MOOE of public hospitals in the country, the administration has instead increased the budget for the national health insurance program or Philhealth by P7.35 billion.

“Philhealth insurance does not give free health services to the people. Even the No Balance Billing/Point of Care essentially is not free because people pay premiums. Philhealth has been in the news due to big salaries of consultants and another news stated that an amount of 10 billion has been unaccounted. Philhealth benefits can not be accessed by people living in far flung areas,” the AHW said in a statement.

The Makabayan bloc noted how instead of funding essential programs for the welfare of the people, the Duterte administration has beefed up the funding for the military and the police, essentially allotting taxpayers’ money to “intensify fascism.”

The budget of the Department of National Defense is set to increase by 35 percent. The budget will reach a total of P183.4 billion in 2019, and includes the P25 billion budget allocation for the Revised Armed Forces of the Philippines Modernization Program, which seeks to procure new arms and military equipment. The said budget also includes P82 billion to fund the maintenance of the Philippine Army’s 204 tactical battalions.

The Department of Interior and Local Government will also receive a total budget of P225.6 billion in 2019, or a 31-percent increase. This includes the P151.7 billion allotted for the “PNP Crime Prevention and Suppression Program,” which lawmakers fear will be used to intensify the police force’s bloody operations.

To fund the 2019 national budget, the government is again targeting to borrow money from local and international funding institutions. The Duterte administration is set to borrow P624.4 billion to finance part of the national budget.

In a statement, Makabayan has rejected the proposed 2019 national budget. “We demand the overhaul of the 2019 budget to favor substantial increases for health, education, housing, support to farmers and local industries, P16,000 minimum salary and regularization of government employees,” the progressive legislators said.

Duterte, Trump to face trial before int’l tribunal for ‘crimes vs Filipino ...