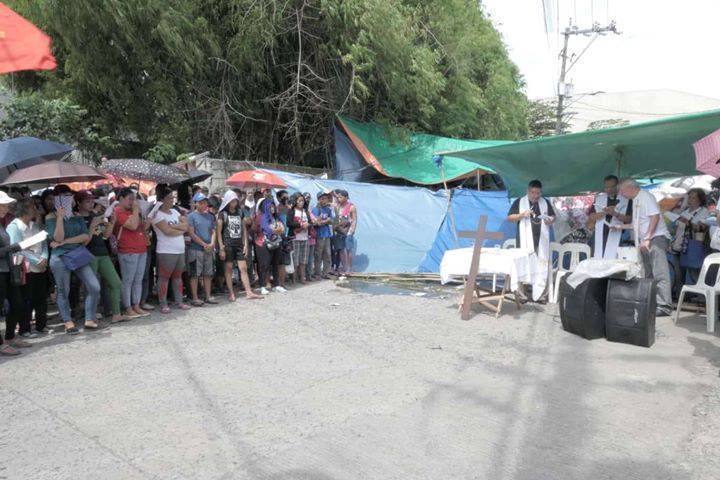 The AlterMidya Network (People’s Alternative Media Network) condemns the violent dispersal of the picketline of striking contractual workers of the giant condiments factory NutriAsia in Marilao, Bulacan, which led to the injury and arrest of several members of AlterMidya.

At around 3 p.m., around 50 security guards of NutriAsia and 20 members of the Philippine National Police in Marilao and Meycauayan violently dispersed the workers while an ecumenical mass was being held at the picketline near the factory gates.

Three AlterMidya correspondents Hiyasmin Saturay, Eric Tandoc, Avon Ang, and one student intern from the University of the Philippines College of Mass Communication, Psalty Caluza, are among those arrested during the dispersal and are currently detained at the Meycauayan police station.

Rosemarie Alcaraz, a correspondent for Nueva-Ecija based Radyo Natin Guimba, who was capturing video footage, was pushed by a security guard into the ranks of workers. While trapped inside the picketline, she was hit on the head with rattan sticks by NutriAsia guards. A policeman also hit her camera, a Canon 70D, with a truncheon.

Meanwhile, a video correspondent of Kodao Productions was told by policemen to stop shooting, or else they will destroy his camera equipment.

AlterMidya, a national network of independent media outfits, strongly condemns the violence inflicted by the police and security guards on our journalists. Our members have been consistently covering the strike since Day One, and have shot exclusive footage of the first violent dispersal last June 14, which was shared widely online. In light of the limited mainstream media coverage of the strike by hundreds of contractual workers in the Philippines’ largest condiments factory, a major media advertiser, our coverage has been instrumental in informing the public of the plight of contractual workers of NutriAsia, a plight shared by millions of other contractual workers in the Philippines.

We call on the public to condemn the violent dispersal of the NutriAsia workers strike and the attack on our member journalists. Such an assault violates freedom of the press and the public’s right to know. The PNP must immediately release these journalists.

We also call on colleagues in the mainstream media to report on developments on the NutriAsia workers strike and their struggle against contractualization, a most pressing issue faced by Filipino workers under the Duterte government.