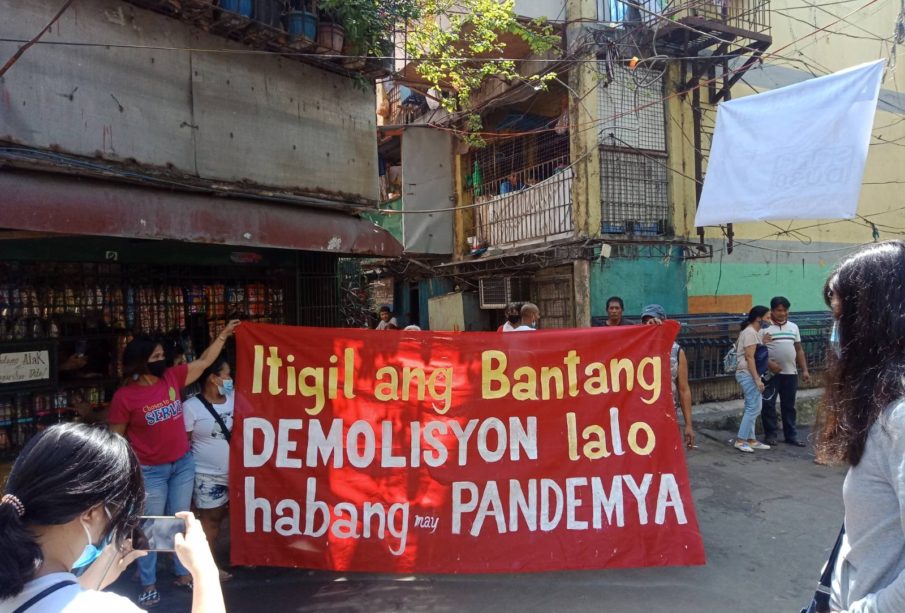 TONDO, MANILA – After the groundbreaking ceremony of the Vitas High Rise Residential Buildings in Katuparan on Feb. 25, shouts of “Demolisyon labanan, huwag pahintulutan!” broke out from the crowd. A throng of residents gathered in an alley to protest the project that will demolish their homes in Katuparan. Up on the balconies of the medium-rise housing buildings, other residents join the rallying cries as they hold their placards in support of the demonstration.

The Katuparan Housing Project in Tondo, a project of the National Housing Authority (NHA), was inaugurated in the 1990s. Its 27 four-story buildings are home to 2,900 families from low-income backgrounds. Now, eight buildings will be demolished to give way to three 19-story buildings as the first phase of an upcoming housing project.

Problems over housing concerns are not new. Phil shares that the National Home Mortgage Finance Corporation’s monthly amortization scheme led to increasing interest and penalty for the residents. Some families incurred debts that reached up to P1 million.

Residents in Katuparan came from slum areas all over Manila. Most of them were displaced from the port area after a container terminal was constructed by the Philippine Ports Authority.

Pemya and her family, like most of the residents in the tenements, live paycheck to paycheck. Majority work in the nearby port area, construction projects, or as household help. Money has been tight before the pandemic, but now families are struggling even more to financially cope since the onset of the world’s longest lockdown.

Josie Rufo, secretary of the association of senior citizens in the barangay, shares the same sentiment. But Josie says they if the demolition will push through, she hopes that a relocation for all affected residents is assured.

The government has promised to give a P54,000 rental subsidy for 18 months, or P3,000 monthly, while the buildings are being constructed. Residents say the implementation process of the subsidy is still unclear.

According to ARK, the government violates the Urban Development and Housing Act (UDHA) by abandoning its responsibility to provide relocation for those affected. The UDHA states that the urban poor subjected to demolition are entitled to temporary or permanent relocation sites within 45 days from the issuance of a court order.

If relocation is not possible within the said period, the law states that financial assistance equivalent to the minimum wage multiplied by 60 working days should be provided per family. Residents within Metro Manila should thus be given up to P32,220 according to the law.

Josephine Tiozon, president of the Homeowners Association in Building 7, points out the mental toll of the demolition on top of COVID-19.

An OFW for 13 years, Josephine lost her job in Vietnam due to the pandemic. She put up a sari-sari store to cover her family’s finances, but now she might lose her source of income again.

Josephine also laments the government’s lack of consultation among residents. She recounts that this year, the NHA conducted a census and told residents that they will have meetings to consider their grievances.

When residents asked NHA about the cost of moving into the new buildings, they were told that computations are still ongoing.

Holding on to promises

The Department of Interior and Local Government issued Memorandum Circular No. 2020-068 ordering local governments to “postpone all demolition and eviction-related activities” while the country is under a State of National Emergency. 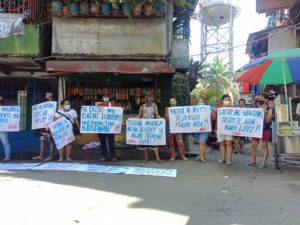 As the groundbreaking ceremony signals the start of the project, residents demand a memorandum of agreement (MOA) from the local governement. They say they cannot be put to ease by promises alone. When worst comes to worst, the residents say they are prepared to fight for a proper housing program and to assert their right to housing.