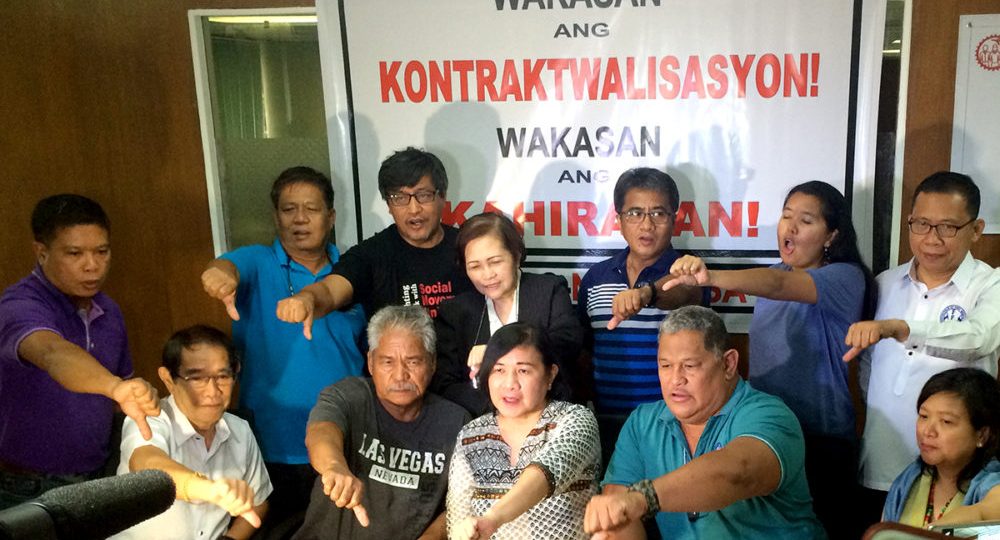 Mendoza, chairman of NAGKAISA, was referring to President Duterte’s promise to end contractualization in a meeting with labor leaders in Malacañang last February 27. Labor groups are now urging Duterte to fulfill that promise by issuing an executive order “that will prohibit all forms of contractualization and guarantee the security of tenure of all workers.”

The demand for an executive order came at the heels of the Department of Labor and Employment’s Department Order 174, which workers say didn’t satisfy their demand for total prohibition of agency-hiring and fixed-term employment.

Labor groups stand firm with their belief that all forms of contractualization “deny workers of their fundamental rights to stable employment, living wage, safe working environment, social protection benefits,” as well as their right to form or join trade unions and participate in collective bargaining.

D.O. 174 allows contractual employees to form or join unions, but with their third-party agency, and not their principal employer.

“We reiterate our position that any measure that regulates, instead of prohibits, contractual employment will not only give the employers a chance, especially the manpower providers, to circumvent the law for profits but also clearly denies the workers [their] constitutional rights,” said the NAPC-FLMWSC in a statement.

The labor groups aim to raise their request to President Duterte for an issuance of executive order that will prohibit all forms of contractualization in a NAPC en banc meeting that will be held on May 15.

“The executive order and the passage of a new law are both critical if the President will meet his goal of freeing six million Filipinos from extreme poverty. Even if the GDP soars to 6.9%, that growth will not translate into inclusive growth if contractualization is present on an epidemic scale,” Mendoza said.

Meanwhile, Soluta expressed that NAPC’s position “will strengthen Duterte’s commitment to end all forms of contractualization.”

He denounced the strong opposition to the president’s commitment to end contractualization by Budget Secretary Benjamin Diokno, Finance Secretary Carlos Dominguez and NEDA Director Ernesto Pernia, whom he named as “the primary instigators of neoliberal policies within the Duterte administration.”