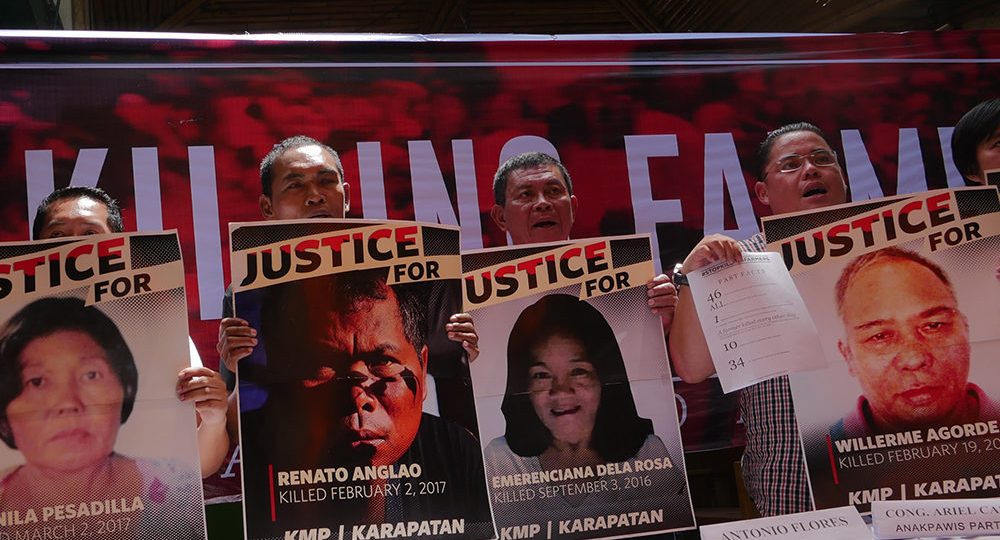 One farmer is killed every two days.

This was revealed by Kilusang Magbubukid ng Pilipinas (KMP) today in a press conference in Quezon City, denouncing the killing of 46 farmers under the Duterte administration.

According to the KMP, the killings escalated since the Armed Forces of the Philippines (AFP) declared an “all-out war” against the New People’s Army (NPA) last February 2. Since then, 23 civilian farmers and indigenous peoples have been killed, or an average of one farmer every two days.

Thirty-six of these killings occurred in Mindanao. All victims were active participants in the struggle for land reform, said the KMP.

Ten of the killings occurred in the province of Compostela Valley alone, including the three most recent victims who were shot and killed in just one day

Last March 27, farmer Cora Molave Lina of Nagkahiusang Mag-uuma sa Laak (NAMULAK) was shot inside her residence in Barangay Kibaguio, Laak, Compostela Valley. Lina was rushed to a nearby hospital but was declared dead on arrival.

Prior to her killing, Lina was vilified and accused by the military of being a supporter of the NPA, and was repeatedly summoned by AFP soldiers to their military camp.

Meanwhile, at around 7:00 in the evening of the same day, NAMULAK members Arman Almonicar and Arlyn Almonicar of Barangay Bollukan Laak, were also shot dead.

Perpetrators of both incidents were believed to be members of the intelligence unit of the 60th IBPA based in Laak.

Role of the AFP

Meanwhile, Anakpawis Rep. Ariel Casilao said that the killings of farmers were usually connected to military operations, farmer disputes with landlords and agro-corporations, and indigenous peoples’ opposition to mining.

“In all of these, the role of the AFP is clear. Aside from victimizing civilians under the counter-insurgency program Oplan Kapayapaan, they act in defense of big landlords and mining companies,” Casilao said.

The solon asked President Duterte as commander-in-chief to “rein in his war dogs,” withdraw AFP troops conducting counter-insurgency campaigns in barrios, and prioritize the peace talks.

Writer and curator Antares Bartolome of Artists for Kidapawan meanwhile said that Duterte must order a stop to these political killings. “It’s either he stops it, or he puts himself squarely against the interests of the people,” he said.

The group also launched the #StopKillingFarmers campaign to gather support for the victims and amplify calls to stop the militarization of rural communities.

The KMP announced that farmers and their supporters will observe “Black Friday” on March 31 to mourn and seek justice for the victims.

Simultaneous protest actions will be held in Northern Mindanao and Metro Manila, with the latter culminating in a protest march to Mendiola Bridge near Malacañang.