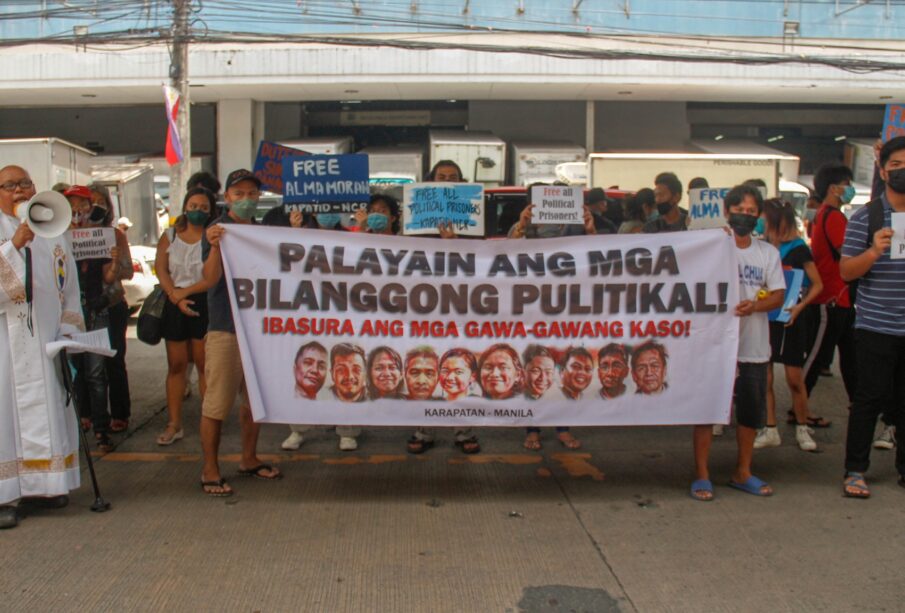 Activists and church groups trooped to the Manila Regional Trial Court on September 13 to demand for the immediate release of detained activists, Alma Moran, Reina Mae Nasino, and Ram Carlo Bautista, otherwise known as Tondo 3. This is in light of the Court of Appeals' decision to nullify the search warrants filed against the activists. Photo by Tudla Productions

Human rights groups demanded a local court to immediately issue a release order for three political activists – including Reina Mae Nasino, whose newborn child died weeks after being separated from her.

The Court of Appeals on August 31 granted the petition for certiorari filed by Nasino, Ram Carlo Bautista, and Alma Moran against Manila RTC Judge Marivic Balisi-Umali.

The appellate court nullified the search warrants issued by Balisi-Umali against the three activists that led to their arrest in November 2019. The court also declared all evidence gathered as a result of the warrant to be deemed inadmissible.

Marites Asis, mother of Reina Mae Nasino, appealed to the courts to release her daughter immediately, adding how she has suffered so much already for “a crime she didn’t commit”. Marites also appealed to give Reina a chance to grieve for her daughter, Baby River, and visit her grave.

Nasino gave birth to Baby River on July 1, 2020 during her incarceration but the infant died in a hospital after three months.

“There is no reason for the Manila Regional Trial Court to hold the human rights activists much longer. They’ve been unfairly and unjustly locked up for three years,” said Fr. Dionito Cabillas of Isaiah Ministry.

Last week, the National Union of Peoples’ Lawyers (NUPL) filed a motion to dismiss the charges against the activists. The group is still waiting for the Manila RTC to rule on the motion.

“In view of the Court of Appeals’ decision, there is no more basis to sustain movants’ prosecution before this honorable court and to continue their detention,” the NUPL said.

Patrick Joshua Santos of Iglesia Filipina Independiente urged concerned government agencies and the Philippine Congress to look into the cases of other political detainees “who are suffering inside a prison cell because of trumped-up cases and false charges.”

Luigi Trinidad, spokesperson of Bagong Alyansang Makabayan Metro Manila, said that the three activists were victims of massive vilification and red-tagging before they were arrested in 2019.

“Red-tagging of political activists and human rights workers must stop. These state-sanctioned harassment lead to much worse attacks. Many were already killed summarily,” he said.

Lawyer Katherine Panguban, Nasino’s counsel, said they will exhaust all legal remedies for the immediate release of Nasino and the two other activists.

“We are seeking the court’s ruling to dismiss the charges. For now, we are waiting for the Office of the Solicitor General to comment on our motion. If there is no appeal, the case will be dismissed,” she said.

‘STEP IN THE RIGHT DIRECTION’: Groups welcome writ of amparo issuance for ...