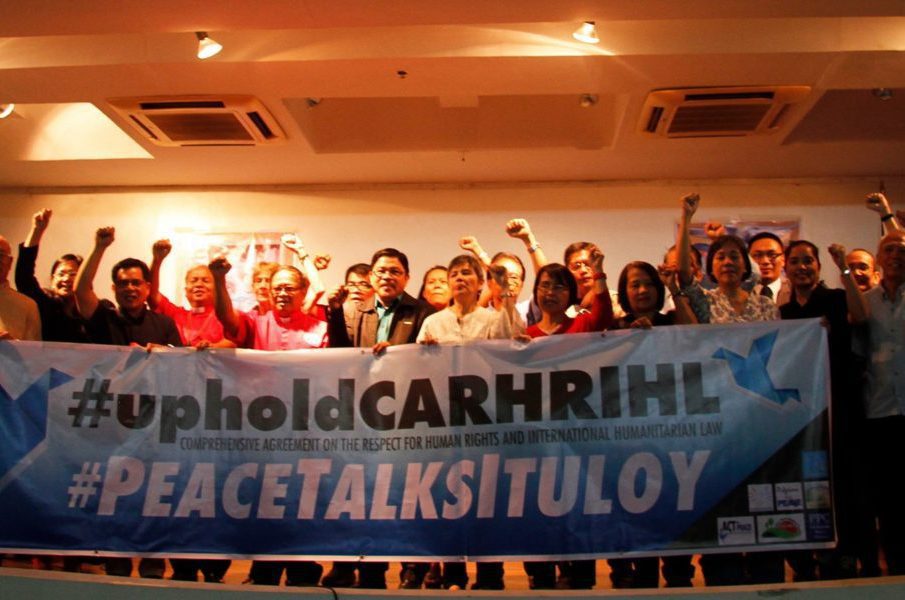 Since the establishment of the Joint Monitoring Committee (JMC) in June 2004 until March 14, 2018, a total of 4,886 complaints were filed against the Government of the Republic of the Philippines (GRP) while 2,012 have been received by the NDFP section.

In a forum at St. Scholastica’s College in Manila Friday, peace advocates said, “At this time, when the Duterte administration appears focused on moves like pulling out of the International Criminal Court and declaring more than 600 persons as terrorists under the Human Security Act, we urge President Rodrigo R. Duterte to instead focus the attention of his government on faithful adherence to the principles of human rights and international humanitarian law.”

Duterte recently announced the withdrawal of the Philippines from the Rome Statute, the treaty that established the ICC following the start of preliminary examination into crimes filed against him in the context of “war on drugs.”

On Feb. 21, the Department of Justice also filed a petition seeking to proscribe the Communist Party of the Philippines (CPP) and the New People’s Army (NPA) as terrorist organizations. Fifteen of the more than 600 named in the petition are NDFP consultants.

Peace advocates who attended the CARHRIHL anniversary event called on Duterte to respect the human rights agreement and resume the peace process with the NDFP.

The group added that CARHRIHL’s full implementation not only provides additional protection for the people amid armed conflict, it will also propel both the GRP and the NDFP to resume peace negotiations.

The statement was signed by Bishop Deogracias Iñiguez of the Philippine Ecumenical Peace Platform, Bishop Reuel Marigza of Pilgrims for Peace, Kaye Limpado of Sulong CARHRIHL, Sharon Cabusao of Kapayapaan Campaign for Just and Lasting Peace, Benjie Valbuena of ACT for Peace and Rey Casambre of the Philippine Peace Center.

In his own speech, Iñiguez called on both the GRP and the NDFP to convene the JMC to discuss the complaints it received. He cited the Article 1 of the Final Provisions of the CARHRIHL stating that the JMC is still operative and it has to regularly convene until it is formally dissolved.

“The sincerity of both parties can only be measured by how faithfully they implement their agreements. We call on the GRP and the NDFP, ‘Respect and vigorously implement all agreements!’” the prelate added.

Since the Gloria Arroyo administration, however, the GRP has repeatedly refused or caused the cancellation of JMC meetings to discuss the complaints.

The Benigno Aquino administration of the GRP has even asked the royal Norwegian Government, Third Party Facilitator to the peace process, to stop funding the committee’s operations.

The current GRP administration, for its part, has convened the JMC with the NDFP during and in between its four formal rounds of negotiations with the NDFP, but no actual complaints have been tabled before Duterte cancelled all meetings and negotiations last year.Raymund B. Villanueva/ Kodao Productions