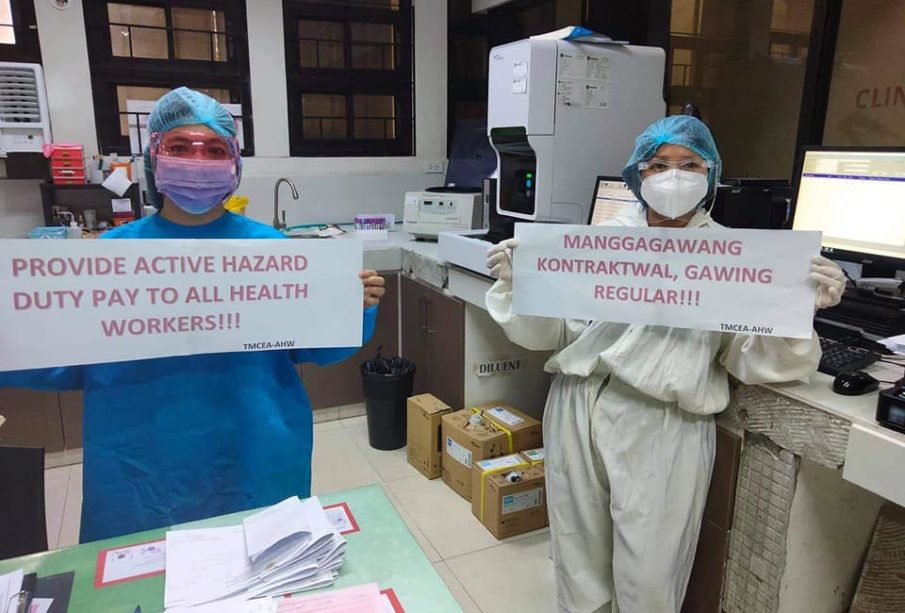 MANILA – In the evening of Holy Wednesday, Pauline Budy limped as she made her rounds in the emergency room of San Lazaro Hospital, the country’s primary facility for infectious diseases. She is in pain.

Over a week ago she fractured her toe in an accident at home, but she has no time to allow it to rest and heal. Budy, a nurse of 15 years, had to report for work because a large number of her colleagues have contracted the dreaded COVID-19, while others are in quarantine for observation.

This has been their situation for the past weeks as the number of cases continues to rise in the Philippine capital. She has tried to keep mum on various issues that the hospital is facing, in an effort to give the government the benefit of the doubt, but that evening, she felt that the burden on her shoulders has become heavier. And on its literal sense, she could feel the Filipino expression: “ang sakit ng kalingkingan damdam ng buong katawan” (the pain in the joints is felt by the whole body).

“I have tried to lie low from media interviews. But so many things have been happening. I have seen how catastrophic things have been for my colleagues,” Budy, who is the president of San Lazaro Hospital Chapter of Filipino Nurses United, told Bulatlat.

Halfway into the week-long stricter lockdown in the capital, health workers like Pauline Budy are still in agony over their unmet demands, with the government failing to address their call to look into their health, economic, and social well-being as they combat the pandemic on the ground.

The Philippines reverted to a stricter lockdown this week due to an increasing number of COVID-19 cases. The health department has logged nearly 750,000 cases, of which 130,245 are considered active as of writing. The highest since the pandemic broke last year.

Contact tracing, too, remains the “weakest link” in the government response, with an official saying that it has not gone beyond a patient’s household. Health undersecretary Maria Rosario Vergeire said it takes an average of nine days to isolate a COVID-19 patient, taking into account the number of days for symptoms to be observed, to undergo tests, and to be isolated.

Meanwhile, health workers are bearing the brunt of government incompetence.

Government data revealed that 15,000 health workers have contracted the virus. With the decreased number of health workers on the ground, this translates to longer working hours, dismal working conditions, and eventually, substandard quality of patient care.

On a regular shift, five nurses are assigned to the ER, said Budy. This was reduced to three per shift when the pandemic broke. Lately, there is only one. Ironically, more patients are coming in. And their triage tent outside the hospital, ideally manned by six nurses, now only has two.

To meet the increasing number of cases, San Lazaro Hospital has opened what used to be abandoned wards and repurposed them as COVID-19 wards. But the number of health workers practically remained the same.

“They have tried to hire nurses with plantilla positions,” she said in Filipino, “but there are too many requirements.”

According to the Alliance of Health Workers, there are over 13,000 plantilla positions in the health department that remain unfilled, despite government pronouncement that it will hire more health workers to combat the pandemic.

A year into the lockdown, health workers in various government-run health facilities continue to have no proper protective gears, with face shields and surgical gloves often running out, or elevators that work only in daytime, making it difficult to deliver oxygen tanks to different wards at night, said the Alliance of Health Workers.

Health workers who were placed on quarantine experienced hunger due to inadequate meals and without proper beds in government-run facilities. Still, some health workers have yet to receive their hazard pay in relation to their COVID-19 response.

It came to no surprise, Budy said, for these conditions to lead some of her colleagues to avail of their retirement options. Others are mulling on working abroad amid poor support from the government.

Budy said their harrowing tale now proves to be uninspiring for those wanting to join the profession.

An end to health workers’ calvary

Apart from attending to their basic needs, Budy said their heavy workload prevents them from providing “the real essence of patient care,” which she added also include building rapport with the patient, or boosting the morale of patients, especially since they are alone in their hospital beds. Their work, too, includes piles of paperwork due to the hospital’s ISO accreditation and the lack of intra-connectivity among the hospital’s departments.

Budy believes that this calvary of the health workers is due to the government’s “overly confident” stance on beating the pandemic, without confirming the readiness of hospitals to deal with the problem. Inconsistent and confusing government policies, too, she said, added to the burden.

Amid their deplorable working conditions, health workers are not taking it sitting down.

On Wednesday morning, the Alliance of Health Workers led a simultaneous protest action, decrying the Philippine government’s continuing neglect for their health, economic, and social well-being.

“In the midst of the pandemic, we health workers are the ones experiencing the true essence of agony,” said Edwin Pacheco, nursing assistant and president of the employees association of the National Kidney and Transplant Institute. An NKTI employee earlier died from COVID-19.

Health workers are demanding proper isolation facilities for them, particularly those who are asymptomatic and with mild symptoms. They have also called for provisions for protective gear, decent accommodation, and the release of their due benefits.

Alliance of Health Workers president urged the Duterte administration to heed their demands so that “the lives sacrificed by our fellow health workers in fighting this pandemic will not be wasted.”