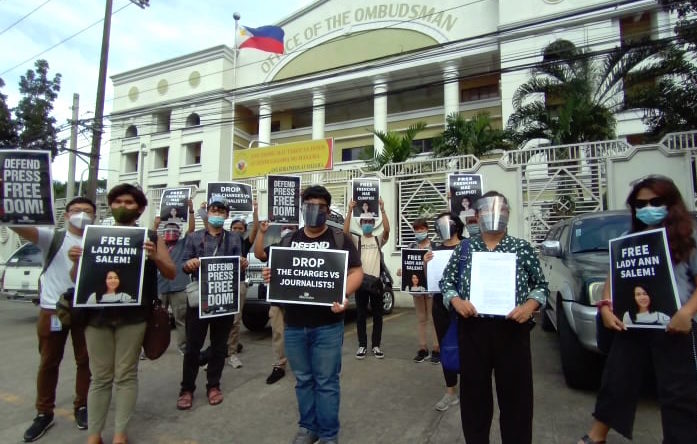 MEDIA GROUPS under Altermidya Network filed a case against members of the National Task Force to End Local Communist Armed Conflict (NTF-ELCAC) over red-tagging. The complaint is the sixth petition filed before the Ombudsman against the anti-communist task force.

Government officials Antonio Parlade, Jr., Lorraine Marie Badoy, and Allen Capuyan of the NTF-ELCAC secretariat are facing an administrative and criminal complaint at the Office of the Ombudsman. Criminal charges under RA 3019 or the Anti-Graft and Corrupt Practices Act, and administrative charges of grave misconduct by public servants were filed against the three respondents.

According to complainants Altermidya Network, Bulatlat, Kodao Productions, and Pinoy Weekly, the “baseless and malicious red-tagging” by the NTF-ELCAC against alternative media outfits not only violates press freedom but also cause harm to member-outfits across the country.

They cited the case of Manila Today editor Lady Ann Salem, who was arrested together with six unionists after police raided their residences on December 10. Her arrest came a few days after the NTF-ELCAC named Altermidya members, including Manila Today, as “communist fronts” at the December 1 Senate hearing on red-tagging. According to Lady Ann, they were made to turn around for an hour while police planted firearms and explosives inside her residence.

Lady Ann’s case is similar to that of Altermidya member Frenchie Mae Cumpio who together with four activists, were arrested after the police and military raided their offices in Tacloban on February 7. Frenchie Mae was repeatedly red-tagged months before her arrest, and was presented by the military as a “high-ranking communist official”.

The Altermidya members added that the red-baiting and terrorist-labeling of the NTF-ELCAC show disrespect for constitutional rights, and its officials should thus be held liable for grave misconduct, dishonesty, oppression, and for acting against ethical standards expected of public officers.

The alternative media outfits are calling the Ombudsman to investigate and dismiss Parlade, Badoy, and Capuyan from service. “We appeal to the Ombudsman to immediately conduct an independent probe on the red-tagging and vilification of alternative media practitioners. Red-tagging is meant to intimidate the critical media, but we will not be silenced amid these relentless attacks against journalists and human rights defenders,” the complainants said. #