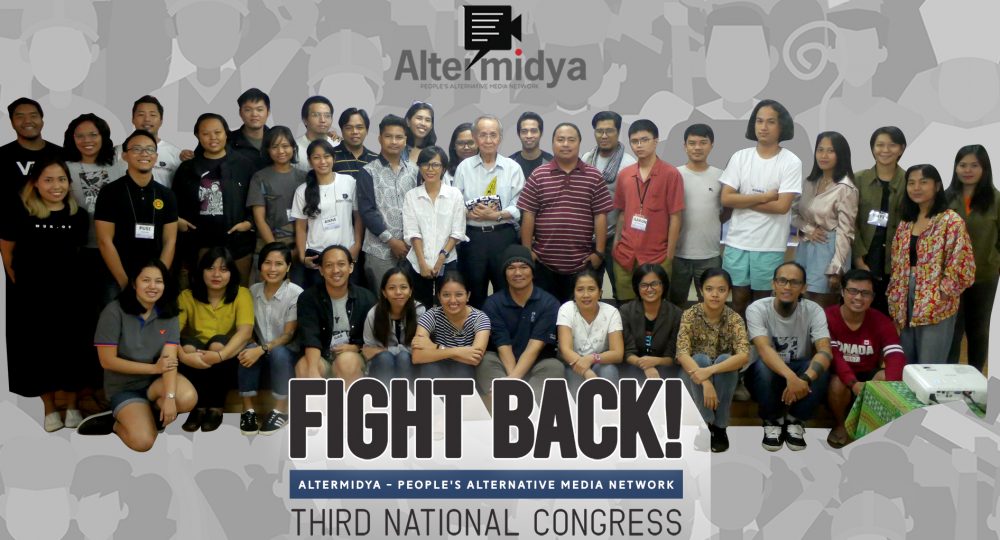 This was the rallying call of over 20 alternative media outfits under the banner of Altermidya People’s Media Network, as they gathered for the network’s Third National Congress in Quezon City during the last week of September.

During the Third National Congress, Altemidya’s media outfits, which include Bulatlat, Pinoy Weekly, Kodao Productions, and regional outfits Northern Dispatch, Panay Today, Davao Today and many others resolved to step up the battle against “disinformation and state repression” and “pursue all possible means to assert the people’s right to know.”

In his keynote speech, national chairperson and former UP College of Mass Communication dean Luis Teodoro said that the alternative media must engage and encourage fellow journalists to take on the difficult, and even dangerous, task of enlightening the public against disinformation.

Aside from its responsibility of providing accurate information to the public, the alternative media, he said, now needs to proactively campaign for strategies needed to combat disinformation.

One of these is promoting media literacy in news outfits and in schools, as well as raising citizen awareness of the ethical values of journalism. “A media literate public can be so informed as to demand that the press and media observe their own standards of truth-telling and accuracy,” noted Prof. Teodoro.

Meanwhile, in a resolution, the Altermidya outfits denounced the heightening attacks not only against the media, but on various organizations and individuals that the administration perceives as its enemy.

“The deliberate attempts to suppress free speech and press freedom put the rights and liberties of Filipinos under siege. In the context of a terror regime that the county is now under in, only an informed and empowered citizenry and free press can thwart the return of all-out authoritarian rule,” the resolution stated.

“At this point, there is an urgent need for the Philippine media community, both in alternative and dominant spheres, and the public to come together to defend the clear onslaught on the media, and on the democratic rights of Filipinos,” it stressed.

The network members approved other resolutions, such as boosting the regional and national operations of alternative media outfits, with the immediate target of expanding up to the provincial level and establishing a network of community correspondents. The network also set out to campaign against fake news and disinformation by launching the “Fight Back” campaign to advance the people’s right to know. The campaign, among many other activities, will launch media literacy workshops among students, media organizations, and other groups.

The four-day Congress was packed with various workshops that aimed to hone the skills of community journalists in grassroots reporting.

These workshops included human rights reporting, fact-checking, news production, voice for broadcast, basics of community-based journalism, etc. A peer counselling session was also held in cooperation with the National Union of the Philippines (NUJP) for journalists that have gone through distressing coverages.

The network resolved to replicate these trainings and workshops at the regional level to contribute to the skills of local correspondents and to the efforts of communities that aim to establish community-based media outfits.

The member-outfits also welcomed several new member outfits, including Paghimutad, a regional alternative media outfit based in Negros Island, that was established in response to the heightened attacks and human rights violations in the region.

A closer and a more systematic collaboration within the network was seen as most crucial. During the Congress, the network’s member outfits reported that alternative media outfits serve as a platform and vanguard in their respective communities. A higher level of unity among alternative outfits across the nation thus need to be achieved, and this was one of the resolutions reached during the gathering.

The network also resolved to form a tighter relationship with the basic sectors, people’s organizations, and various civil society formations to ensure that the issues that they face are thoroughly reported.

At the same time, the network agreed to unite with fellow journalists in the mainstream media, as well as artists, activists, the academe and other progressive groups in combating threats to freedom of speech and expression.

“Despite the difficulties that alternative media outfits faced at all fronts in recent months, the whole network is energized and ready to up the ante in the fight to produce more reports on the numerous issues, and campaigns of the people that merit coverage as well as national and international attention,” Guda remarked.

Established in 2014, Altermidya continues to work in further enhancing the strength of grassroots-based media in pushing for the realization of communication rights in the country.

Since the network’s formation, there has been significant cooperation among the independent media in supporting the work of each outfit, establishing new media outfits and correspondents in remote areas, and building the capacity of other grassroots-based groups in community journalism.