Home›Opinion›Editorial›Ampatuan Massacre, a grim symbol of reigning impunity under Aquino 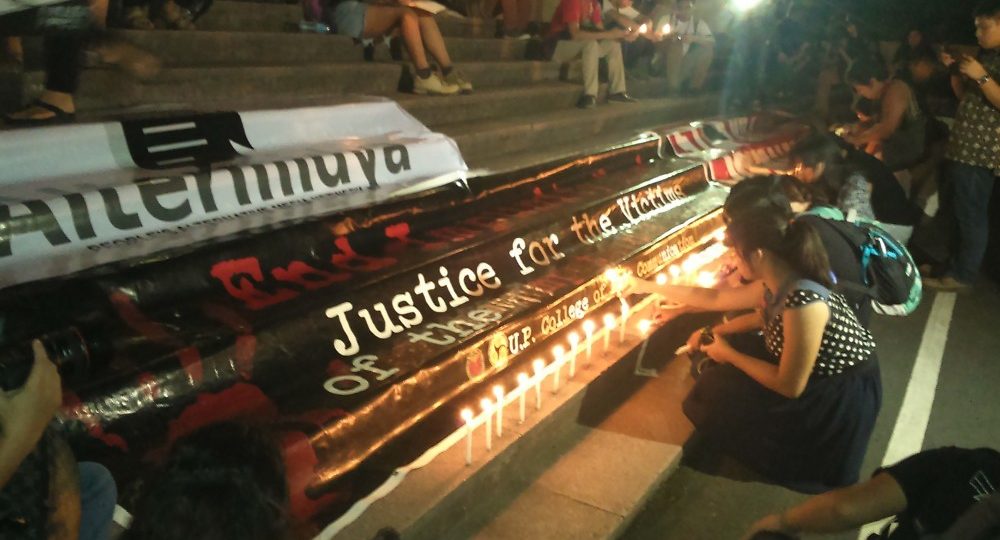 Ampatuan Massacre, a grim symbol of reigning impunity under Aquino

IT is Pres. Benigno Aquino III’s last year in office but justice remains elusive for the victims of Ampatuan massacre. No perpetrator has been convicted, the victims still cry for justice. Aquino’s vow six years ago to immediately resolve the gruesome massacre has become a hollow promise: the culture of impunity and sheer lack of accountability continues to reign under his administration.

The Ampatuan massacre, considered as the single most violent incident in the history of Philippine media, claimed the lives of 58 people including 32 journalists on November 23, 2009. The case against the alleged masterminds, the Ampatuan warlord clan, moves painfully slow.

The court case, after six years, is still at its preliminary stage at gathering evidence and bail proceedings. One of the primary suspects, Ampatuan patriarch, former governor Andal Ampatuan Sr. died early this year of liver cancer, extinguishing his criminal liability in the massacre case. Another suspect, Sajid Ampatuan, was released and is running for mayor of Shariff Aguak, under the United Nationalist Alliance (UNA) of Vice President Jejomar Binay, in the 2016 polls. Majority of the suspects including members of the clan’s private army and several police officers are still at large or were granted bail.

The gross failure and lack of interest of the Aquino government to swiftly bring justice to the victims and end impunity continue to cultivate a dangerous atmosphere for Filipinos, media worker or not. After the Ampatuan massacre, the killing of journalists persists under Aquino’s term. The recent killing of DWIZ correspondent Jose Bernardo brings the total number of murdered journalists to 30 under the Aquino administration and 150 since 1986.

Extrajudicial killings of political activists, human rights defenders, indigenous people, and community leaders continue. Threats and harassment of state critics are intensifying. All these are a bleak reminder of the escalating impunity in the country and the ineptness of government that breeds it.

Six years of waiting has been enough. The Ampatuan massacre is a pivotal issue in the people’s struggle against growing impunity. Another day of delay in bringing justice to the 58 victims is another license for greater human rights violations and unaccountability in the country. We could no longer allow this government, or the next, to continue this injustice. We hold the Aquino government accountable for this injustice as well as its own crimes against the people.  We would persist in demanding for justice for the victims and their families of the Ampatuan massacre, and all cases of extrajudicial, arbitrary and summary killings, enforced disappearances and other human rights violations. Accountability for these murders, for political repression, the absence of justice, and the persisting culture of impunity are all the responsibility of the President and the State.

In Photos | The Philippines ‘swelling up with anger’ over APEC