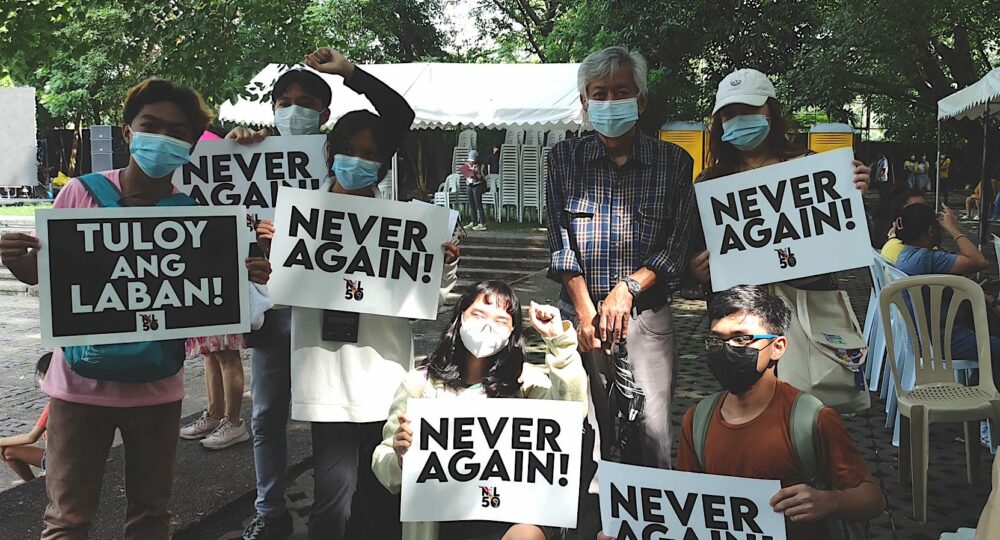 Survivors of Martial Law call the declaration of a holiday to celebrate the birth date of the late dictator Ferdinand Marcos Sr as an “insult to thousands who suffered”.

“People who have committed crimes against the country should not be honored and should not become a model to our children,” said Edita Burgos, a veteran journalist and Martial Law survivor.

On Sept. 7, President Ferdinand “Bongbong” Marcos Jr declared Sept. 12 a special holiday in the northern Philippine province of Ilocos to mark the birth anniversary of his father, Marcos Sr.

“It is but fitting and proper that the people of the province of Ilocos Norte be given the full opportunity to celebrate and participate in the occasion with appropriate ceremonies,” the proclamation read.

Burgos, in a press briefing on Sept. 10, said, “I don’t see anything about Marcos Sr that the youth should follow. Young people must not follow what he had done– thievery, oppression, and human rights violations.”

Film director Joel Lamangan said the proclamation is another attempt to distort history and “rebrand the family name” of the Marcoses. “How could you declare holiday the birth of a murderer? It is a spit on the grave of those who were killed, tortured, and disappeared,” he said.

Human rights organizations have reported that at least 3,257 people were killed during the military rule of Marcos Sr, while about 34,000 others were tortured and 1,600 have disappeared.

Former lawmaker Satur Ocampo, who survived torture and incarceration under the Marcos dictatorship, said there is not “even a hint of apology” from the Marcos family for the atrocities of the former president.

He said victims of human rights abuses during the 1970s have not even attained justice despite the relentless campaign of Martial law survivors and rights activists. “The ill-gotten wealth of the Marcoses has not been returned to the country,” Ocampo added.

Historian Francis Gealogo, a professor in the Ateneo de Manila University, said it is “only in the Philippines” that a dictator is honored with a holiday. “There is nothing to celebrate if the person had caused suffering and death. In other countries, they put a marker on the birth place of a dictator– not to celebrate but to mark the person as a bad example,” he said.

Gwendolyn Pimental-Gana, former Commission on Human Rights official, said a holiday for Marcos Sr is like “glorifying something that is not truthful,” adding that it is a “step to revise history.

In a statement, the group Campaign Against the Return of the Marcoses and Martial Law (Carmma) said that the holiday declaration shows Marcos Jr’s lack of respect for history and human rights. “Marcos Jr should not use his current position he holds for his family’s personal gain,” the group said.

Various rights organizations in the country are set to conduct a series of mobilizations to mark the 50th year of the declaration of martial law, which Marcos Sr proclaimed on Sept. 21, 1972.