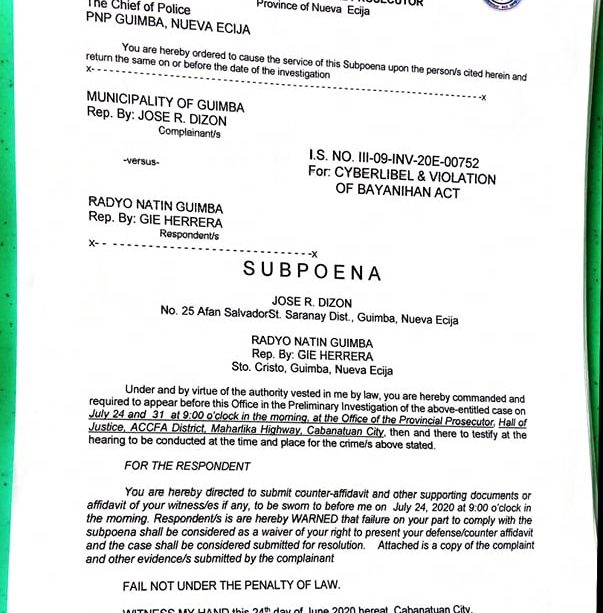 The mayor’s charges against RNG, filed in the middle of a raging pandemic, is a form of censorship meant to intimidate the radio station into reporting issues only in a manner acceptable to the municipal government.

What is worse is that the court subpoena for the RNG, which was received by the Guimba chief of police, was not delivered to the station in time for the July 24 preliminary hearing. The RNG management only got to know of the subpoena over a month later, on August 11 — raising questions on the delay.

Guimba mayor Jose R. Dizon’s charges of cyberlibel and alleged violation of RA 11469 of the Bayanihan to Heal As One Act of 2020 stemmed from RNG’s social media posts on the municipality’s budget for cash aid, which he claimed as misleading and allegedly brought “chaos and panic” among Guimba residents. The municipal mayor also accused the radio station of making senior residents hold placards with messages like “Gutom na kami” during RNG’s relief drive in the barangays.

RNG has denied that it spread such false information, much less made any resident hold placards. In fact, the radio station has been crucial to the community in providing timely and reliable information especially amid the pandemic. Moreover, RNG was only performing its journalistic duty of reporting on the grievances of the residents aired through their local organizations.

RNG has previously reported anomalies in the cash aid distribution involving several local and barangay officials, which has apparently earned the ire of local authorities.

We in the alternative media remind local government officials that they are duty-bound to defend the rights of their constituents, which include expressing their criticism and receiving information from a free press.

The hostility of local authorities towards independent media is hurting the efficient response to the pandemic. Instead of intimidation, harassment, and consequent censorship, the local government should ensure the swift delivery of information and open communication in these urgent times.