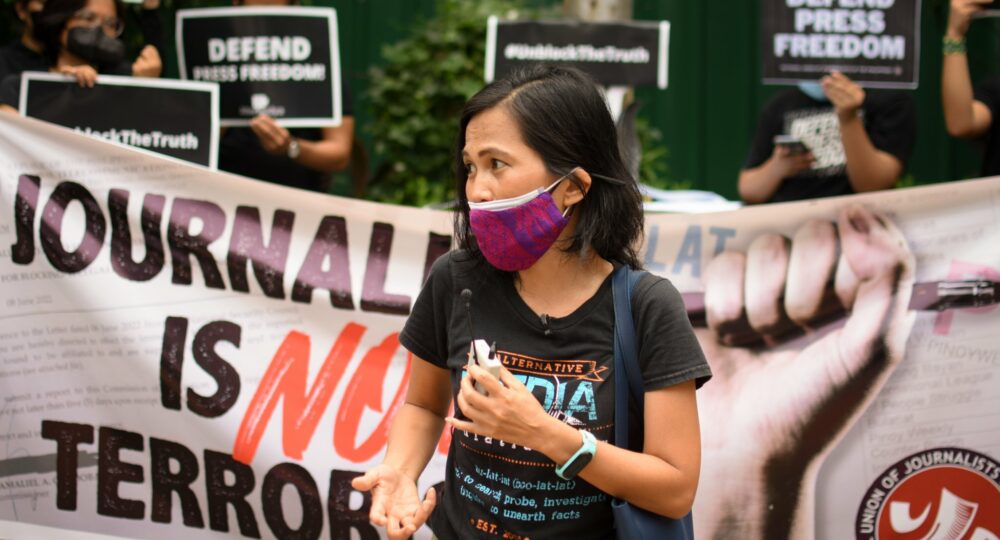 Bulatlat Managing Editor Ronalyn V. Olea testified in court that the blocking of its website Bulatlat.com is still in force, nearly two months since the National Telecommunications Commission (NTC) issued its June 8 memorandum.

During this afternoon’s hearing at the Quezon City Regional Trial Court Branch 306, Olea was cross examined by defense lawyers. The defense tried to prove that Bulatlat is still able to operate despite the NTC memorandum, citing recent articles uploaded to its website.

“The fact remains that we are censored in our own country,” Olea told Judge Dolly Rose Bolante-Prado when the latter asked some questions.

Bulatlat’s web host Qurium Media Foundation has set up a mirror site with url bulatlat.org for its readers in the Philippines. Olea asserted that the existence of the mirror site is proof that the block order constitutes prior restraint.

“Without the block order, we would not have resorted to putting up the mirror site. The NTC and Esperon have deprived us of our original platform for distribution bulatlat.com,” Olea said.

In her affidavit, Olea said the blocking of Bulatlat.com “violates and continues to violate Plaintiff’s freedom of expression, freedom of the press, and the people’s right to information, and seriously damages Bulatlat.com’s standing in the community as a credible and reputable alternative media outfit.”

For Alviar, who works for the Ramento Project for Rights Defenders, the blocking has made his research on human rights issues difficult. He said that Bulatlat articles serve as references for his group’s submissions to several United Nations bodies.

As a lecturer in UP Baguio, Alviar recommends Bulatlat.com to his communication students. In his affidavit, he articulated the effects of the continued blocking, “One of the things I impress upon my students is the importance of studying issues from diverse perspectives. If I can’t implement it myself because I am unable to access news reportage from alternative sources, it feels like my words lack gravitas. They also lose the opportunity to do what I have been practicing because of the blocking.”

In her affidavit, Espina-Varona said she was outraged after finding out about the NTC memo. “There was no reason to block the website except for the vague and nonsensical statement of former National Security Adviser Hermogenes Esperon that it is affiliated to or supporting terrorists and terrorist organizations. It is outrageous because the blocking by the government of any news site, being an act of censorship, is bad enough, but what makes it worse is that Bulatlat.com is an award-winning news outfit. It has never, in the years that I’ve read it, done the things Esperon claimed.”

For Doringo, Bulatlat is one of the few media outfits consistently covering the issues affecting the urban poor.

Bulatlat’s counsels from the National Union of Peoples’ Lawyers (NUPL) are given one day to file its Formal Offer of Documentary Evidence while the defendants NTC, Esperon and NSA are also given one day to submit their respective Comment/Opposition from receipt of the plaintiff’s Offer of Evidence. Thereafter, the prayer for issuance of Writ of Preliminary Injunction shall be deemed submitted for resolution. #