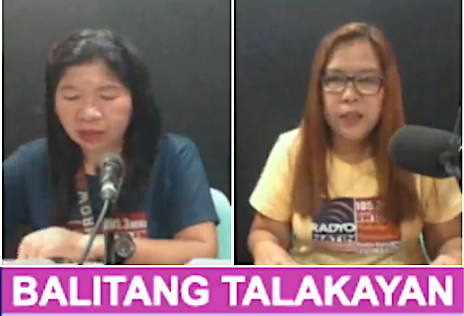 THE CASE filed by a barangay chair in Nueva Ecija against a local community radio station over an alleged violation of Republic Act 11469 or the “Bayanihan to Heal as One Act” has been dismissed due to lack of evidence.

But the case was dismissed by the provincial local prosecutor. The Cabanatuan City prosecutor’s office ruled that there was lack of evidence to support the allegations against RNG station manager Gie Herrera, field reporter Lina Villaflor, palay trader Nila Dela Cruz, and sponsor-donor and peasant leader Zandro Tomas.

Section 6 (f) of RA 11469 punishes “individuals or groups creating, perpetrating, or spreading false information regarding the COVID-19 crisis on social media and other platforms, such information having no valid or beneficial effect on the population and are clearly geared to promote chaos, panic, anarchy, fear or confusion.”

Offenders of the provision may face two months imprisonment and/or a fine of not less than P10,000 up to P1 million.

The radio station was accused of spreading false information to the public since senior citizens had supposedly already received aid from the government.

RNG’s legal counsel Ericson Sarmiento-dela Cruz said he received the copy of the resolution last February 7. The lawyer said that probable cause was not established.

The respondents, through Sarmiento-dela Cruz, said that the text of the placards mentioned in Domingo’s complaint only reflected the legitimate demands of senior citizens guaranteed under the 1987 Constitution, particularly Article III Section 4, which reads, “No law shall be passed abridging the freedom of speech, of expression, or of the press, or the right of the people peaceably to assemble and petition the government for redress of grievances.”

Herrera told Altermidya in a phone call that a separate cyberlibel complaint against the RNG filed by Guimba Mayor Jose Dizon has been dismissed. But the charge against the radio station’s alleged violation of the Bayanihan Act under a different context remains.

The RNG camp has since filed a motion for reconsideration as of February 11.

The municipal council of Guimba on May 11, 2020 had approved a resolution authorizing Dizon to file a complaint against RNG for supposedly violating the Bayanihan to Heal as One Act.

Mayor Dizon claimed in his complaint that RNG’s report was inaccurate and misleading, leading to “undue chaos, confusion, panic and angered our constituents.” This was refuted by Sarmiento-dela Cruz, who said the story was simply based on a transcription of a video record of the April 20 municipal council session where the said fund was deliberated.

In May 2020, Altermidya and the National Union of Journalists of the Philippines (NUJP) said it received reports that the Guimba local government unit, including the police, harassed the community radio station on multiple occasions.

Aside from legal threats over the alleged violation of the Bayanihan Act, incidents involving the LGU include warning the RNG against distributing aid to senior citizens, as well as preventing their reporters from covering local matters.

Altermidya, in a statement last year, reminded local government executives not to take advantage of the pandemic and use it to silence dissent and curtail press freedom. “It is the constitutional right of the people to air their grievances, and the primordial duty of the press to report on these issues,” it said.

The NUJP meanwhile said that “All these incidents are brazen violations of the constitutionally guaranteed freedoms of the press and of expression.” The International Federation of Journalists (IFJ) likewise urged the local government to allow reporters to operate “unobstructed.”

“During the current Covid-19 pandemic, journalists must have a safe environment to report without obstruction or legal challenges. The IFJ calls on the government to respect journalists’ right to report and the public’s right to be informed and hold authorities accountable,” the IFJ said in a statement.

Radyo Natin Guimba is a member of the Manila Broadcasting Company’s Radyo Natin brand. It is also a member outfit of the Altermidya Network. The radio station’s reach covers 20 municipalities or around 500 barangays in Nueva Ecija, Tarlac, and Pangasinan.