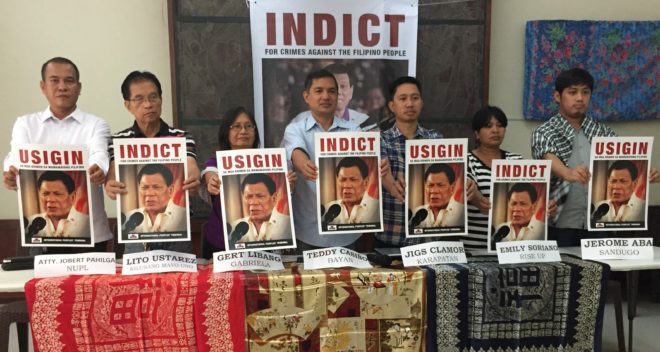 Duterte, Trump to face trial before int’l tribunal for ‘crimes vs Filipino people’

PHILIPPINE President Rodrigo Duterte and US President Donald Trump are set to face trial for “crimes against the Filipino people” before the International People’s Tribunal (IPT 2018), which will convene in Brussels, Belgium from September 18 to 19.

“IPT 2018 seeks to indict the US-Duterte regime for crimes against the Filipino people. It is a regime that has killed thousands with impunity and unleashed an unjust war on the people. This tribunal is a vital part of the Filipino people’s growing resistance to tyranny, fascism, militarism, foreign intervention, and war of aggression,” said Jigs Clamor, deputy-secretary general of Karapatan, one of the complainants.

According to the IPT 2018 organizers, the global court sources its legitimacy from “the people as the primordial source of authority and power of all courts – international or local.” The tribunal, the organizers said, is composed of “leading public figures of recognized achievements and high moral stature who will come up with a verdict based on a thorough and fair assessment of evidences, and in line with the applicable legal standards.”

The jurors’ panel include legal luminaries and known international human rights advocates, including Monica Moorehead, co-coordinator of the International Working Women’s Day Coalition in New York City; Ties Prakken, professor of criminal law at Maastricht University in The Netherlands; Sarojeni Rengam of Malaysia; Azadeh Shahshahani of Iran, former president of the national Lawyers’ Guild of the US; Dr. Gianni Tognoni of Italy, secretary general of the Permanent People’s Tribunal; Roland Weyl of France, dean of the Paris Bar, among others.

The verdict from the IPT 2018 will be submitted to the International Criminal Court (ICC), the European Parliament, and the United Nations Human Rights Council as a “case against the US-backed Duterte regime”.

CRIMES AGAINST THE FILIPINO PEOPLE

Karapatan, along with Bagong Alyansang Makabayan (Bayan) and other local organizations will raise a total of 21 cases in the IPT 2018, which include the Duterte administration’s “violations on economic, social and cultural rights, violations on civil and political rights, and violations on the right to self-determination.”

The civil and political rights violations include the “mass murder of more than 23,000 poor Filipinos through the brutal war on drugs, and more than 160 extra-judicial killings mostly of peasant and indigenous leaders,” Karapatan said in a statement.

Trumped-up charges against leaders, activists and critics, including that of Senator and former justice secretary Leila de Lima, media repression, the deportation of Sr. Patricia Fox and other foreign missionaries, and the detention of more than 500 political prisoners are also included in the charges.

Meanwhile, economic, social, and cultural rights violations include the administration’s continued implementation of policies including “labor-only contractualization and union busting, landlessness and harassment of poor peasants, misogyny and abuse of women, negligence of overseas workers in distress, imposition of anti-poor economic policies like the Tax Reform for Acceleration and Inclusion (TRAIN) Law, and the absence of decent housing for the urban poor.”

Violations of international humanitarian law and the peoples’ rights to national self-determination and development include the “attacks on 226 indigenous peoples’ schools in Mindanao by the AFP, PNP and the Department of Education; bombings and airstrikes of indigenous communities in Malibcong, Abra in March 2017; the massacre of seven personnel of the National Democratic Front (NDF) in August 2018; and the intervention of the US military and government in the Philippines.

Sultan Hamidullah Atar of Marawi City will also testify in the IPT 2018 to prosecute Pres. Duterte for “crimes committed against the Moro and the Filipino people.”

Sultan Atar will be testifying about the human rights violations committed by the Duterte regime to the Meranaws during the Marawi City siege, and the declaration of Martial Law in Mindanao.

Suara Bangasamoro Chairperson Jerome Succor Aba will also testify on the charges regarding religious discrimination, arbitrary detention and torture committed against him by agents of US Department of Homeland Security and US Customs and Border Patrol last April.

Aba said they will also bring up the massacre of seven Tausug youth on September 14, 2018 in Patikul, Sulu. State military forces were allegedly behind the massacre.