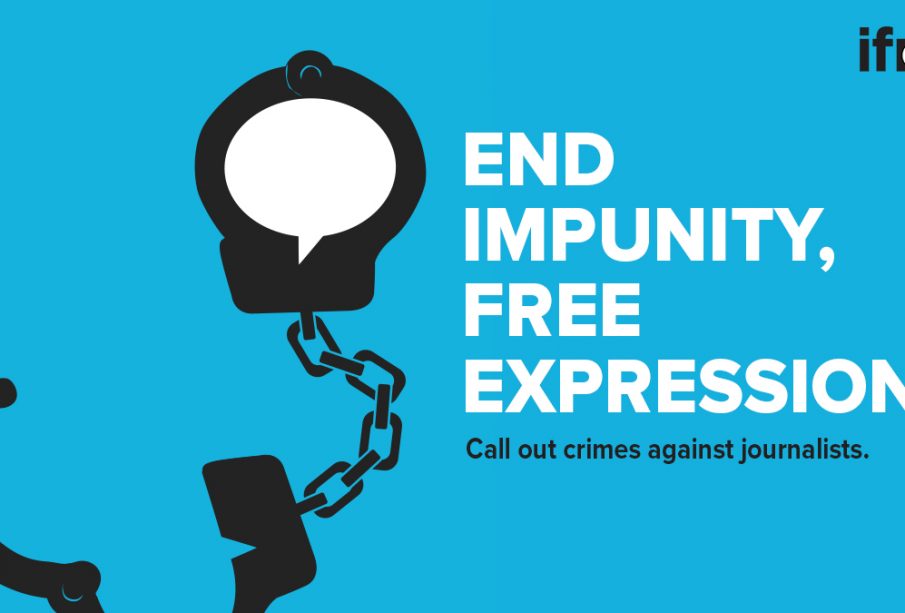 On The International Day to End Impunity for Crimes Against Journalists, Altermidya is publishing this opinion piece by Annie Game, Executive Director of IFEX, a global network promoting and defending freedom of expression and information.

On this International Day to End Impunity for Crimes Against Journalists, it’s important to recognize the essential link between the right to freedom of expression and the right to information. Journalists are too often the direct targets when either right is under attack, and ultimately — we are all victims.

Two weeks ago, the UN General Assembly voted to declare 28 September the International Day for Universal Access to Information. A significant victory, following a decade of sustained advocacy by numerous civil society groups, including many African members of the IFEX network.

Some people — but probably no one involved in the struggle to promote and defend freedom of expression — might have greeted this news of a new UN Day with a shrug. But they should think again, for our right to information is inseparable from our right to expression, and both are increasingly under attack.

Threats to information are coming in many forms — from attacks on journalists, to deliberate disinformation, to the obstruction of newspapers — and the impacts are far-reaching: keeping people from the information they need to engage with the issues they care about, exacerbating political polarisation, and undermining democracy.

Let’s take a recent high-profile example of the power of expression, and its reliance on access to information.

Last month, an estimated 6 million people took to the streets in response to the climate change crisis. The creativity of their protests inspired many as they marched; expression in action, emboldened by facts.

Swedish climate activist Greta Thurnberg implored us to “listen to the scientists” — but what if the voices we need to listen to are silenced, directly or indirectly?

Voices can be silenced through censorship, or drowned out in a sea of disinformation. But in a growing number of instances, the silencing tactic used is murder. Murder without consequences. Murder with impunity.

A comprehensive study released in August 2019 revealed that killings of environmental activists have doubled over the past 15 years. In 90% of those cases no one has been convicted — a shocking level of impunity, matched by those of murdered journalists.

As we mark another International Day to End Impunity for Crimes Against Journalists, this deadly form of censorship is never far from our thoughts.

UNESCO’s list of journalists who have been killed around the world — over a thousand since 2006 — is a sobering reminder. The proportion of women among fatalities has also risen, with women journalists facing increased gender-specific attacks.

Of the 207 journalists killed between January 2017 and June 2019, more than half were reporting on organized crime, local politics and corruption.

Their right to expression was ended, forever, to stop them from sharing information.

Every time such a crime goes unpunished, it emboldens others. Those who would share information in the public interest rightfully ask themselves – is this worth my life? Is it worth putting my family at risk? And if they decide that it is not, who can blame them? The ripple effects of impunity are endless.

That is why, for over eight years, the IFEX network has campaigned to end impunity for crimes against journalists and all those exercising their right to freedom of expression.

It’s not work that lends itself to quick successes. As the expression goes, it’s a marathon, not a sprint. The work does not end with finding the perpetrators; states must be held accountable for allowing or encouraging a climate of impunity in which such crimes flourish.

We embrace every win, large and small. The good news is that at IFEX we are seeing creative, collaborative, and powerful new strategies, and tangible progress.

In the past 12 months, we’ve seen the truth finally coming to light in The Gambia about the 2004 killing of journalist Deyda Hydara; a landmark ruling by the Inter-American Court of Human Rights that found the government of Colombia culpable in the 1998 murder of Nelson Carvajal Carvajal, and the historic decision by the Inter-American Commission to take to the Court the case of the brutal attack in May 2000 that nearly took the life of investigative journalist Jineth Bedoya Lima.

Just two weeks ago, we welcomed the decision by Kyrgyzstan to re-open the 12-year old case of the murder of journalist Alisher Saipov, following sustained pressure by IFEX and its local members the Media Policy Institute and Public Association Journalists.

Imagine, these cases represent a combined 66 years of impunity.

So let those responsible for — or contemplating — violence against journalists, hear this loud and clear: long after the world’s attention may have moved on, you may think you have gotten away with murder. No. Those of us committed to fighting impunity are persistent. We do not give up. So you can never rest easy.

For us, the culture of impunity surrounding attacks on journalists represents one of the single greatest threats to freedom of expression worldwide. The progress we have made toward ending impunity would never have been possible without the resilience, persistence, and tenacity of those who fight it.

We must use our freedom of expression, to defend it. We must use it to call out crimes against journalists, and end impunity.

Community journalism is not a crime: Stop disinformation on Negros 57, free ...