Home›#FactsFirstPH›FACT CHECK: Did Robredo lie about her stint as economics teacher? 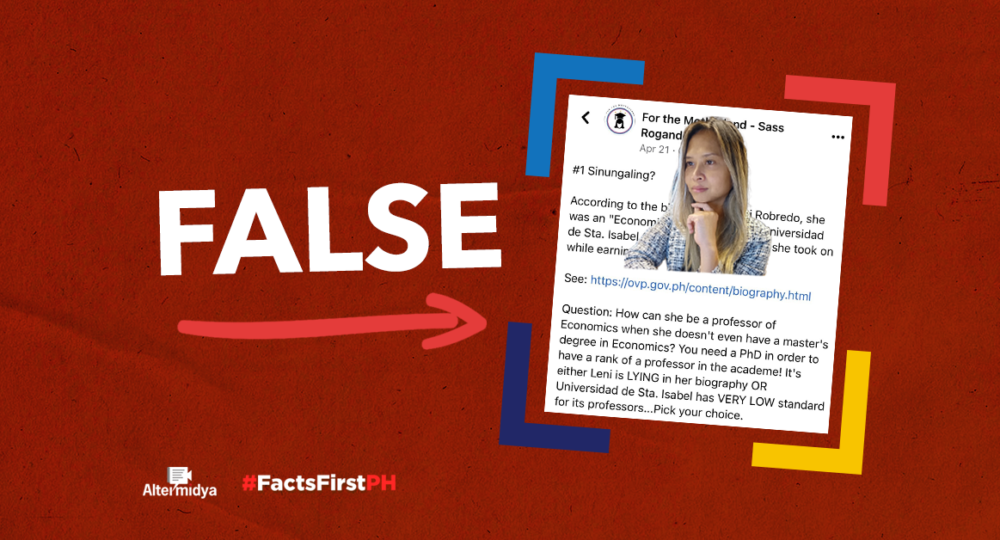 FACT CHECK: Did Robredo lie about her stint as economics teacher?

On April 21, SMNI news commentator and pro-Marcos blogger Sass Sasot claimed in a Facebook post that Vice-President Leni Robredo lied about being an economics “professor” as she may not have the qualifications.

Sasot further argued that Robredo’s professorship could only be genuine if Universidad de Santa Isabel (USI), the school where Robredo briefly taught economics, has a “very low standard for its professors.”

Sasot provided a ‘broken link’ from the website of the Office of the Vice-President as the basis of her accusation against Robredo.

Robredo lied about her stint as an economics teacher

Robredo, in public speeches, and in her official biography did not claim professorship in USI. What the Vice-President has stated in several events, including a speech in a 2014 graduation ceremony of the UP School of Economics, and in a Facebook live video that she indeed “taught” in USI, without details on whether she was an instructor, assistant professor, associate professor, or a full professor.

Also, at the time of Robredo’s teaching stint from 1987 to 1997, CHED Memorandum Order (CMO) No. 40, s. 2008, which requires all higher education institutions’ faculty to have at least a master’s degree was yet to be released.

Sasot, who presents herself as an “international relations expert,” has been repeatedly flagged by fact-checkers for spreading inaccurate stories and falsehoods across her online platforms.