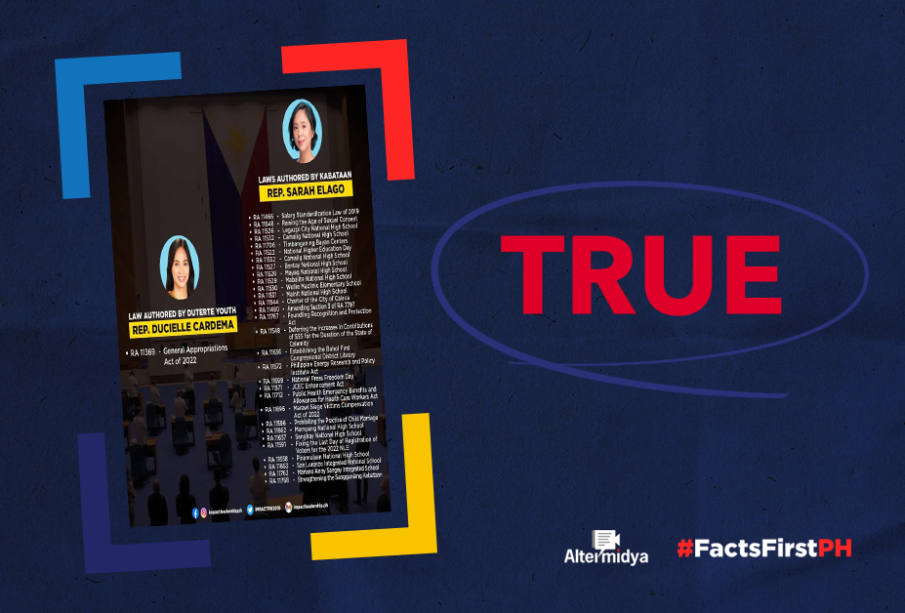 On May 31, Reddit user ‘selimbradley-3’ posted on the subreddit community r/Philippines an infographic comparing the laws authored by the two youth party-lists in the 18th Congress: the Duty to Energize the Republic through the Enlightenment of the Sectoral Youth Sectoral Partylist (Duterte Youth) and the Kabataan Partylist (KPL). As shown in the photo, Duterte Youth had authored only one law throughout its term, which is the RA 11639 or the General Appropriations Act of 2022. Meanwhile, there were 32 laws listed under Kabataan Partylist, including RA 11466 or Salary Standardization Law of 2019.

CLAIM: Duterte Youth authored only 1 law in the 18th Congress

FACTS:
Records from the website of the House of the Representatives show that Duterte Youth, as represented by Ducielle Marie Cardema, has principally authored a total of 15 bills from 2019-2022, with only one being passed into law: RA 11639 or the General Appropriations Act of 2022.

Beyond this figure, Duterte Youth has also been embroiled in several controversies. After winning in 2019, election lawyers and youth organizations filed a petition against the proclamation of Ducielle Cardema for supposedly failing to comply with the party-list hearing and publication requirements set by the Commission on Elections (COMELEC). However, the Supreme Court junked the petitions and COMELEC proceeded to proclaim Duterte Youth and allowed it to retain a seat in the House of Representatives.

Meanwhile, Kabataan Partylist has been a member of the Philippine Congress since 2007.  Congressional records show that it has principally authored 704 bills in the 18th Congress.

WHY THIS MATTERS:
There has been repeated questions on the success or failure of the party-list system, especially with regard to how said groups supposedly represent the sectors they align with. Legislative performance and track record can be used as one – but not the sole – metric in assessing this. – Paula Joanne Marinduque and Jheruleene Anne Ramos