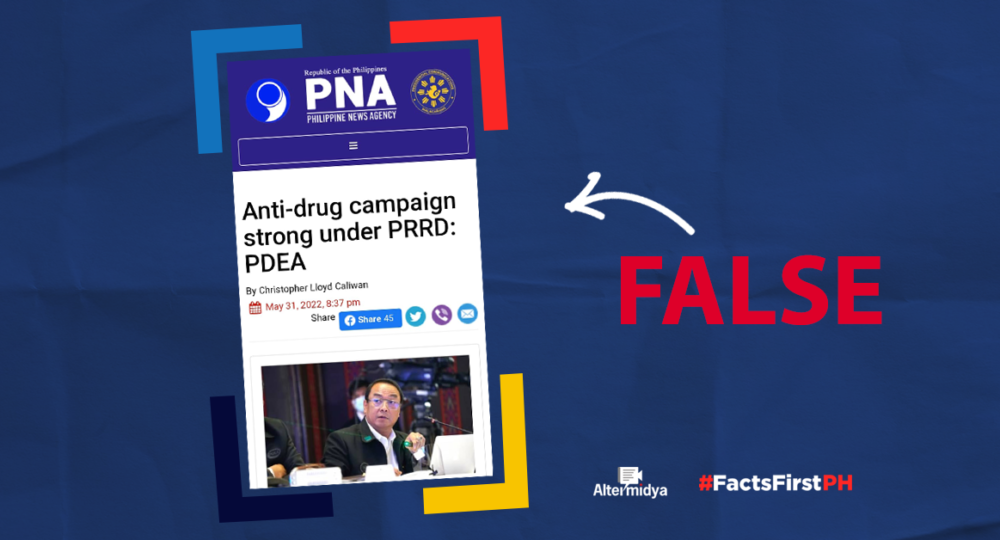 On May 31, Philippine News Agency (PNA) published an article titled “Anti-drug campaign strong under PRRD: PDEA.” In the article, Philippine Drug Enforcement Agency (PDEA) Director General Wilkins Villanueva claimed that the administration’s drug war prioritized the welfare of the people and “taking human life was never the intent of anti-drug operations.” Villanueva also added that the deaths that occurred in operations were the result of the violent actions of drug personalities during lawful arrests.

CLAIM: Human lives were ‘valued’ in Duterte’s ‘war on drugs’

FACTS:
According to research conducted by the Ateneo Human Rights Center (AHRC), the conduct of the Duterte administration’s anti-illegal drugs campaign were pockmarked with questionable tactics and standard of operations that overtly violated human rights, including the right to privacy, information, due process, presumption of innocence, rights against illegal search, and self-incrimination.

The International Criminal Court (ICC) has authorized the investigation of the killings under the war on drugs campaign, explaining that there is a reasonable basis to continue the investigation including the questionable law enforcement operations and killings. Human rights alliance Karapatan called for the continuation of the investigation to make the Duterte administration accountable.

Last June 2022, the ICC reported that it would be seeking to resume the investigation of Duterte’s “war on drugs” after it was temporarily halted in November 2021. As of April 2022, there are at least 6,248 individuals killed in the anti-drug operations according to Philippine Drug Enforcement Agency.

Despite not being made accountable for casualties caused by the anti-illegal drugs campaign, former President Duterte even suggested that the new president Ferdinand Marcos Jr. should continue the war on drugs. – Vanessa Adolfo & Jamaica Marciano