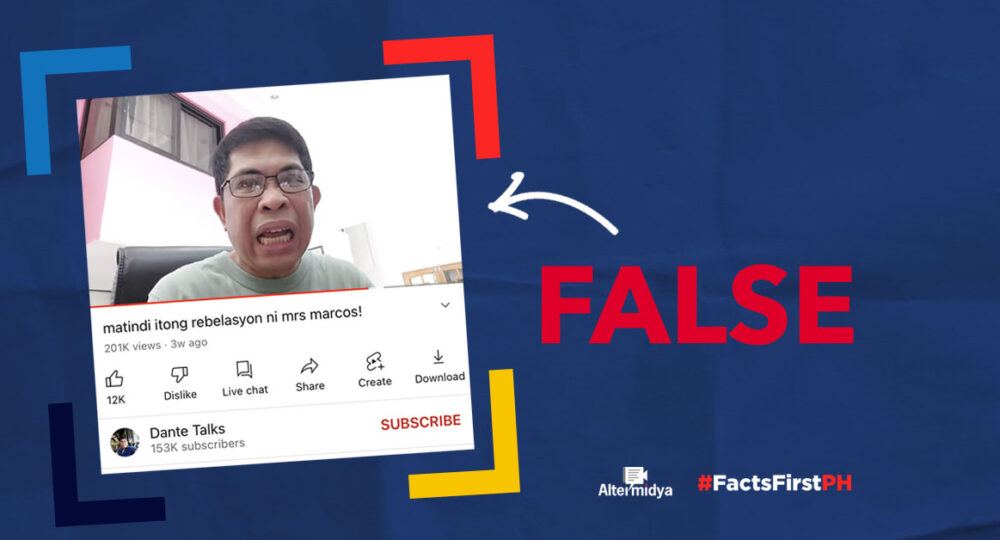 The YouTube account Dante Maravillas or Dante Talks that frequently posts pro-Marcos content, uploaded a video titled “matindi itong rebelasyon ni mrs marcos!” in which he discussed an interview with Imelda Marcos from the Daily Tribune.

At the 15:19 video timestamp, Maravillas explained that when Marcos Sr. first assumed office as president, there was “no justice and democracy,” and added that it was the late dictator who brought “freedom, justice, and democracy to Filipinos” who he said were enslaved by oligarchs for decades.

FACTS:
As noted by the Committee to Protect Journalists, the Philippine media quickly gained the reputation of being “the freest press in Asia” in the 1950s, some years after the United States granted the country independence in 1946, with many Filipino journalists starting to practice investigative journalism to expose government corruption and wrongdoing. This can readily belie the video’s claim that Marcos Sr. was the purveyor of “democracy, freedom, and justice.”

Instead, various historians and analysts have all agreed that the state of democracy and freedom of speech worsened during the term of the late dictator. Several media institutions including ABS-CBN were targeted and controlled. Even prominent journalists and media owners including Teodoro Locsin Sr., publisher of the Philippines Free Press, and Manila Times publisher Chino Roces were arrested. Numerous cases of harassment and torture of journalists and critics were also recorded during Marcos Sr.’s term as president.

Altermidya Network is part of #FactsFirstPH which brings together various sectors that are committed to promoting truth in the public space, and exacting accountability on those who harm it with lies. For those interested to join the initiative, email info@factsfirst.ph