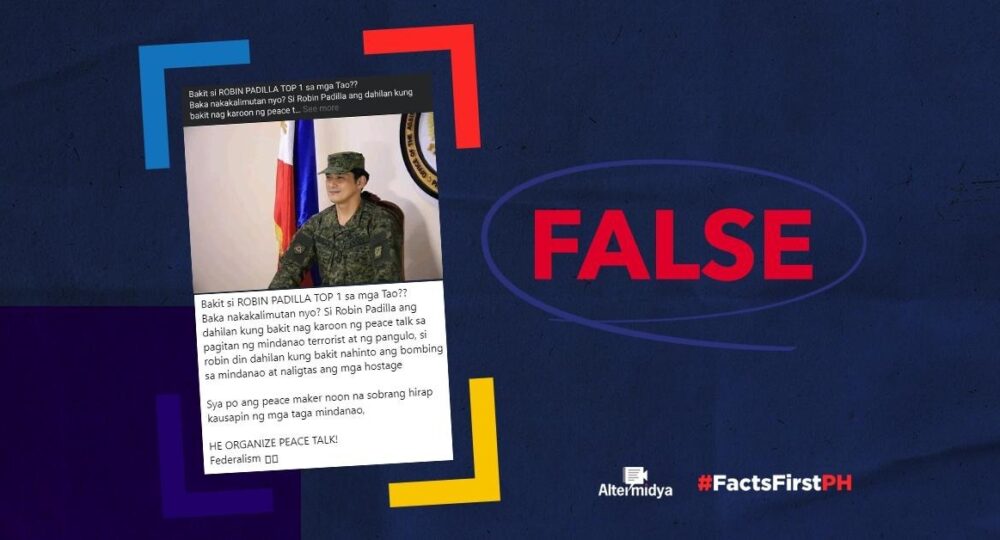 On May 10, ‘Echo-Speaks’ – a Facebook page that purports to be a Christian-themed page – claimed that actor and senatorial frontrunner Robin Padilla initiated peace talks with rebel groups in Mindanao.

“Si Robin din dahilan kung bakit nahinto ang bombing sa Mindanao at naligtas ang mga hostage [Robin is also the reason why the bombings in Mindanao came to a stop, and he is instrumental in saving the hostages],” a section of the post claimed.

The post came after Padilla emerged as the frontrunner in the senatorial elections, clinching the top spot with over 26.49 million votes based on the latest partial and official count of the Commission on Elections (Comelec) released on May 16.

No records show that Robin Padilla has initiated or taken part in brokering peace deals with any anti-government group in Mindanao.

The claim regarding Padilla’s supposed efforts in organizing peace negotiations for the government can be traced back to a video statement released by his wife, actress-host Mariel Rodriguez. In a video she posted on her YouTube channel, she explained that her husband has been “organizing peace talks” in Mindanao. The video showed a photo of Padilla talking to Lumad and Moro leaders. The said photo was credited to activist and peace advocate Renato Reyes Jr.’s tweet back in 2014. The said photo is part of Reyes’ series of tweets documenting a protest caravan held by Lumad groups and peace advocates in Manila at that time and is in no way part of any formal peace negotiation.

Padilla’s only involvement in government talks with rebel groups is not through a comprehensive peace deal but in a hostage negotiation. In April 2000, former president Joseph Ejercito Estrada allowed Padilla and several other religious leaders to negotiate the release of more than 50 hostages taken by the Abu Sayaff Group (ASG) in Sumisip, Basilan.

However, in 2016, emerging as one of the most visible supporters of President Rodrigo Duterte, Padilla has called on the revolutionary group New People’s Army to surrender instead of striking a negotiated peace accord and issued statements supporting the National Task Force to End Local Communist Armed Conflict (NTF-ELCAC), and lent his voice as the producer and narrator for a film that featured alleged ex-NPA members now at the employ of the NTF-ELCAC.

Being a frontrunner in the senatorial elections, the public has wondered out loud what Padilla’s legislative agenda will focus on, making his name a trending topic on the social networking site Twitter for several days after the May 9 elections. While the post in question purports that Padilla has been instrumental in brokering peace in Mindanao, a cursory analysis shows that there is no evidence to prove this claim.

The video titled “Bakit Nga Ba Si Robin?” was first published on Mariel Rodriguez’s YouTube Channel on May 7 and has currently gained 429,804 views, with 25,000 likes. A seven-minute trimmed version of this video has been uploaded to Tiktok by a certain @fastmovierecap with the caption “Robin Padilla ibinuking ng sariling asawa” and has since gained 354 reactions and 322 shares. This version has been reposted to Facebook many times, including one that has garnered 177,185 reactions and 9.8 million views.

Meanwhile, photos of Padilla alongside the long caption have also been reposted on social media. One of these posts was published on May 10 and currently has 156,050 reactions and 102,000 shares. These posts were often attributed to a certain “Ms. Verena.” However, there is not much information about this purported “source.” – Dan Navarro

On the dismissal of the cyberlibel case against Nordis journalists