Home›#FactsFirstPH›FACT CHECK: Starlink entry in PH should be credited to Marcos Jr. 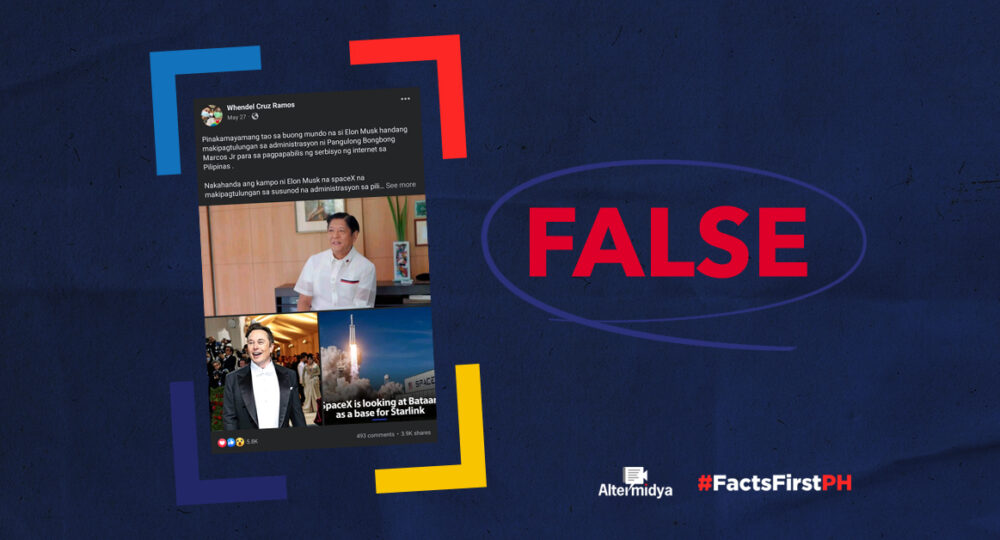 A Facebook post claimed that President Ferdinand Marcos Jr. should get credit for the National Telecommunications Communications (NTC) approval of Starlink internet Services Philippines Inc.’s registration on May 27, which allowed the company to provide its internet services in the country.

The post also claimed that this is part of Marcos’ campaign promise that he would resolve the slow internet connectivity and other internet-related problems in the country.

CLAIM:
Starlink entry in PH should be credited to Marcos Jr.

FACTS:
Starlink is a unit of SpaceX, a space transportation and aerospace manufacturer owned by the American billionaire Elon Musk. It has more than 1,500 low-Earth orbit satellites that will also be operating in the Philippines, the first country in Southeast Asia where they would provide their “satellite internet services.”

Starlink’s “satellite internet services” is considered a “breakthrough” in the field of telecommunications and is expected to improve the quality of internet services in the country that was ranked 68th out of 120 countries in the Inclusive Internet Index last 2021.

Since October 2021, SpaceX has been looking for possible deals and partner companies from the Philippines to tie up with to bring their services to the country. On October 27, Starlink finalized a three-year deal with the satellite operator, ABS Global Ltd.

The said deal would allow Starlink to build an earth station located at Clark in Pampanga.

In November 2021, SpaceX met with the Board of Investment (BOI) to further discuss the former’s plan to build a Philippine-registered company that aims to provide faster and more reliable internet connection, especially in the remote areas of the country.

The registration of Musk’s Starlink as a value-added service (VAS) provider was approved by NTC on May 27, allowing Starlink to “directly access satellite systems, build, and operate broadband facilities to provide internet services.”

A cursory review of available materials also reveal that Marcos Jr. has never mentioned Starlink during the presidential campaign season.

WHY THIS MATTERS:
Since the COVID-19 pandemic started, internet usage increased as the government implemented strict quarantine lockdowns and protocols. Separate reports also showed that subscribers of the country’s leading internet providers skyrocketed as Filipinos were forced to study online and work from their homes to control the coronavirus.

However, despite the massive increase of internet users in the country, the Philippines still has one of the worst and slowest internet connections in the world, according to the latest study conducted by the Speedtest Global Index.

The Philippines also has one of the most expensive broadband fees per month in the entire Southeast Asian region, despite the poor connections. This is an issue that needs urgent attention, especially by the new president, yet falsely crediting to the entry of a foreign player in the field may be interpreted by some that he has already done substantial action to alleviate the situation and in turn diffuse the call for better internet services.

While Starlink’s entry in the Philippines has been heralded by some analysts as a welcome development, it has yet to be seen if it could affect pricing and improve connectivity. As the group InfraWatch notes, SpaceX’s eventual ability to shake up the local telco industry would depend on the affordability of its service. – Genevieve Feliciano and Jheruleene Anne Ramos