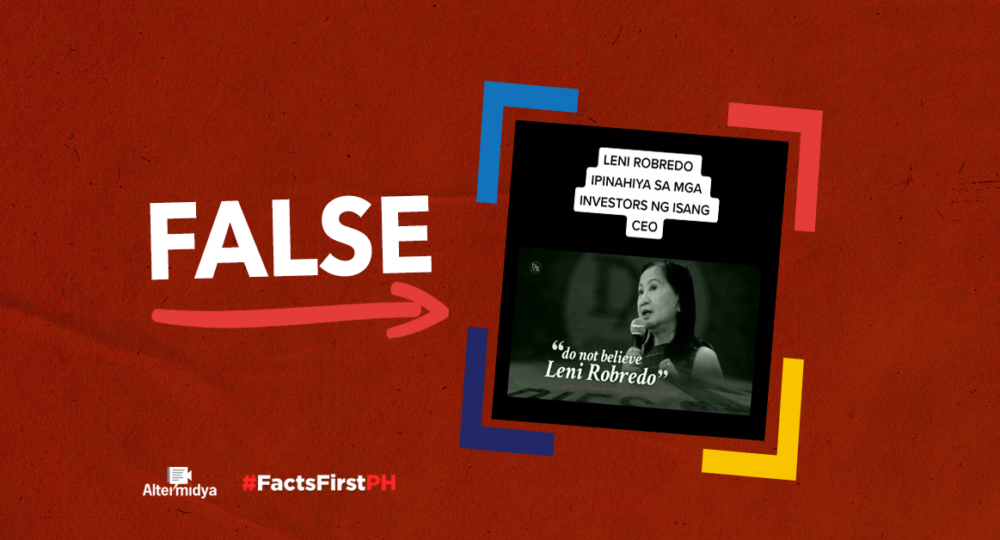 The video featured Philippine Amusement and Gaming Corporation (PAGCOR) Chair Andrea Domingo who, for over four minutes, explained in a speech before businessmen how Vice President Leni Robredo “maligned our country and our people” for criticizing the Duterte administration’s anti-illegal drugs campaign. Domingo said that Robredo’s criticism served is “unforgivable” as it discourages investors from doing business in the country.

The video has been spliced from the footage of the opening of the ASEAN Gaming Summit held last March 2017 in Conrad Manila which was attended by over 300 delegates from the Asian gaming industry.

Domingo was referring to Robredo’s video address for a side session at the 60th Commission on Narcotic Drugs annual meeting, which took place days before the ASEAN Gaming Summit. In the said video address, Robredo expressed her opposition to the extrajudicial killings caused by the Duterte administration’s anti-illegal drugs campaign.

Domingo’s comments on Robredo’s criticism of drug-related killings are unfounded. Months before the video address was shown – in January 2017 – Forbes published an article titled “How Philippine President Duterte’s Anti-Drug Killings Will Stunt Economic Growth.” The said article featured a statement from the American Chamber of Commerce in Manila which explained that the “issue of extrajudicial killings and the drug war is alarming and could possibly harm the optimism of American business to invest in the country.” This only shows that the dampening of investor confidence in the Philippines cannot be blamed on Robredo’s scathing criticism of the ‘war on drugs,’ but rather on the violence and brutality that the anti-illegal drugs campaign left in its wake.

The deaths ensuing from the anti-illegal drugs campaign have been well-documented and are even the subject of an investigation pending before the International Criminal Court.

The Facebook video in question is making it appear that Robredo’s criticism of the drug war is unwarranted and has in effect made potential investors veer away from the country, despite records showing that up to 30,000 people have been killed in these operations.

Ironically, what can be regarded as unwarranted is blaming the vice president for waning investor confidence in the Philippines, a claim made even after several foreign business groups have already cited the ‘war on drugs’ as one of the primary reasons why they are wary of investing in the country.