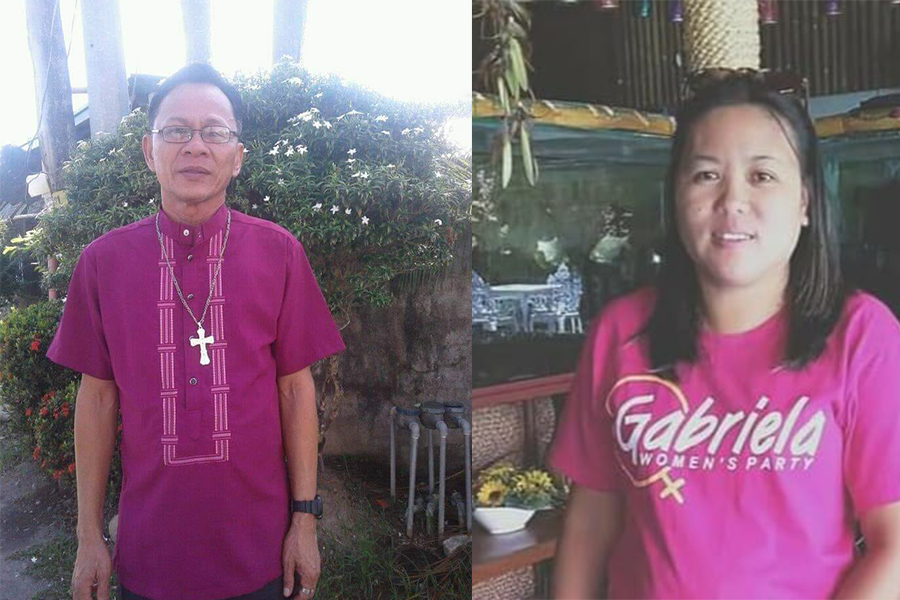 Legazpi City- “This is not the time to fear,” the families of Jenelyn Nagrampa and Pastor Dan San Andres said as they demand the release of the two human rights defenders arrested in separate incidents this month in Camarines Sur.

Bicol progressive groups Bagong Alyansang Makabayan (BAYAN), Karapatan, and Bicolana Gabriela will lead the launch of the #FreeJenAndPastorDan campaign before Pres. Duterte’s 5th State of the Nation Address (SONA). The movement aims to gather support and campaign for the release of Jenelyn and Pastor Dan.

Both are being charged with double murder charges in relation to an alleged ambush by the New People’s Army, which resulted in the killing of two soldiers in Ragay, Camarines Sur in May 2018. According to Karapatan-Bicol, both have filed their respective counter-affidavits last year denying their participation in the alleged ambush.

On the day of the said incident, Pastor Dan was celebrating mass in his parish at the UCCP Church South Centro. Meanwhile, Nagrampa was campaigning for the upcoming barangay elections.

Both are currently detained at Camarines Sur Provincial Jail and are scheduled for arraignment on July 24 at Libmanan regional trial court.

Imelda San Andres, retired teacher and wife of Pastor Dan, expressed disappointment over the negative remarks online about her husband. “I hope that they will understand my husband’s work as a pastor and serving in the church. My husband should be freed because he has nothing to do with those charges,” Imelda said.

Leo Caballero, husband of Jen, shared that they have already learned the lesson of Martial Law during the Marcos dictatorship. “Reason teaches us how to stand up for what is right,” he said. “I think it is more urgent now to strengthen our resolve and stand firm in whatever trials come our way,” he said.

On the day of arrest

Officers reportedly issued warrants for the two activists. But their relatives noted there were lapses in the conduct of the arrests, especially in the case of Pastor Dan.

According to Imelda, their family is still traumatized by the seeming brutality of the arresting officers. The warrant of arrest for Pastor Dan was issued 30 minutes after the arrival of the police but he was forced to drop on the ground with a gun pointed at him. Imelda also shared that around 20 ununiformed men surrounded the vicinity.

In Jane’s case, the arresting officers did not handcuff the Gabriela leader, in a seeming show of respect. “Maybe the police officers were hesitant because Jen is respected in our barangay. However, there were several policemen who were not in uniform,” Leo said.

Progressive groups condemned the arrest of Jen and Pastor Dan as part of the Duterte administration’s continuing “crackdown and criminalization of human rights defenders”.

Pastor Dan has been serving in the Church for almost 20 years. He became the Conference Minister of the North Bicol Conference during Bishop Eliezer Pascua’s term assigned to South Luzon Jurisdictional Area. Currently, he is the chairperson of the Christian Witness and Service Committee of the Conference with the mandate to protect and uphold human rights.

As an official of Karapatan-Bicol, Pastor Dan is active in several fact-finding missions and speaks publicly about the plight of communities under militarization.

Jen, on the other hand is currently a barangay councilor in San Isidro, Nabua, Camarines Sur. She was also elected as BAYAN Bicol chairperson during the 4th BAYAN Bicol Congress in 2018.

Before the PNP Ragay municipal police led by Police Major Ruben Perico filed a double murder case against the two in 2019, Jen was visited by alleged agents of DILG Region V, carrying a letter addressed to DILG Secretary Eduardo Año.

It was a DILG Memorandum Circular prohibiting support to so-called Left-Wing Rebel Groups. In the letter, it tagged Bicolana Gabriela as a regional women’s “left leaning organization (LLO) in Bicol region with Jen branded as “symphatizer”.

Jen raised the harassment case of the alleged DILG agents during a dialogue with DILG regional officials in October 2019. DILG-V Assistant Director Arnoldo Escober Jr. clarified that they were unaware of such cases against progressive groups using the name of the DILG.

Escober added that they did not know the people who identified themselves as DILG members and harassed Jen Nagrampa and other members of progressive groups in Bicol. The said agency did not receive any report on this, he claimed.

The dialogue held in October was accompanied by a protest action by Tanggol Magsasaka in front of the DILG regional office. The groups condemned Memorandum Order 32, which they blamed as the reason behind the intensified police and military operations in the region.

Human rights violations became rampant in Bicol with the implementation of MO 32 as well as Malacañang’s Executive Order 70, according to Karapatan.

The situation further worsened after the Anti-Terror Act of 2020 was signed, said Dan Balucio, secretary general of BAYAN Bicol. The group noticed that the practice of red-tagging progressive groups and individuals became more brazen.

“It is a convenient tactic of the AFP and PNP in order to vilify human rights defenders, political activists, dissenters, environment advocates and other critics,” Balucio said.

“Red-tagging is a prelude to this monstrous legislation, the Anti-Terror Act of 2020, which will surely be used in the designation of progressive organizations and personalities as so-called terrorists.”

Jen’s husband said the accusations against the Gabriela leader were grave. “Whenever I come home, it is painful to explain to our children the situation of their mother. But I think my children understand and know that their mother is innocent,” Leo shared.

Leo added that that his wife is bravely facing the case against her. “She believes she will be free. Maybe it will be a challenge for the members of Bicolana Gabriela that even if their chairperson is in jail, there’s a need to be stronger,” he said.

Imelda said that she is proud of Pastor Dan, and called on women in the same situation to be strong and to not lose determination. (Baretang Bikolnon)