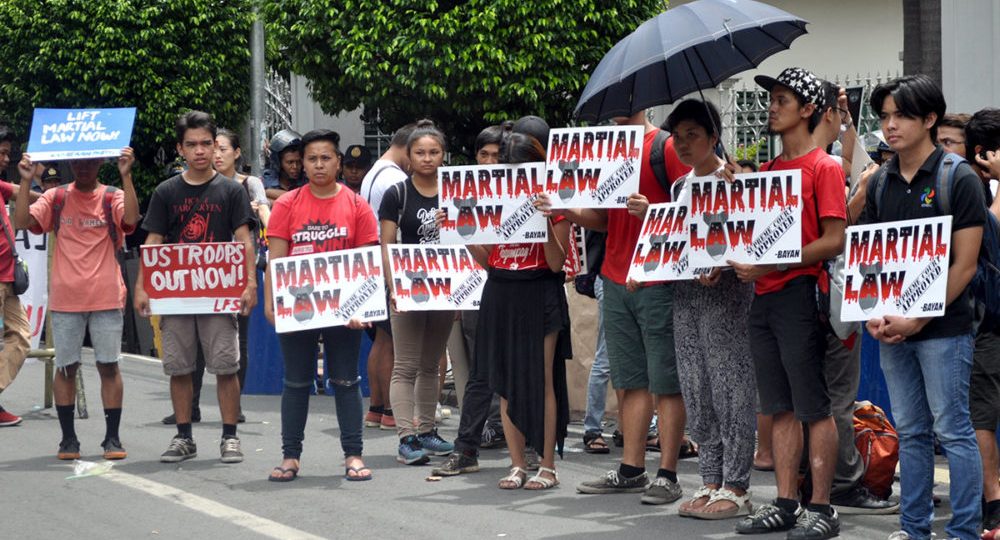 Under the scorching heat of the sun, more than 100 protesters stood before the gates of the Supreme Court in Padre Faura yesterday, shouting “Never again to martial law,” as they awaited the decision of the judiciary on Pres. Rodrigo Duterte’s declaration of martial law in Mindanao. Their voices, however, turned into grumbles as 11 of the justices of the Supreme Court ruled in favor of the president’s decision.

Members from Kilusang Mayo Uno (KMU), Gabriela, Piston, Kadamay, Migrante Youth, League of Filipino Students, and Anakbayan also expressed disappointment with the result. They all believe that the decision will only encourage more human rights violations and the possible placement of the entire country under martial law.

In a statement, petitioner National Union of People’s Lawyers said, “Today we weep for Mindanao, we weep for our country. Notwithstanding the declaration of martial law’s legality, those responsible for the sledgehammer solution to a legitimate problem must be made to account if not by law but by history, particularly for the alarming increase of human rights violations in Mindanao,” Atty. Ephraim B. Cortez, NUPL secretary general said.

The NUPL added that the Supreme Court decision is a “big letdown and disappointment” that “dilutes the already inadequate constitutional safeguards of the anti-dictatorship 1987 Constitution.”

For Jerome Adonis, secretary general of KMU, the experience of more than one month of martial law in Mindanao has only proven that it leads to the abuse of military power. “Malinaw ang martial law declaration. Ito po ay pahintulot ng kumprehensibong paglabag sa kalayaang sibil ng mga mamamayan,” he said.

Last July 2, for instance, seven farmers from Compostela Valley were on their way to visit a Lumad school when the military accosted them and accused of being rebels, according a report by human rights group Karapatan-Southern Mindanao.

Soldiers placed allegedly bombs into the bags of the farmers, which included women senior citizens. The farmers were charged with illegal possession of explosives and are now detained at the Compostela Municipal Police Station.

Duterte declared martial law in Mindanao on May 23 during his visit to Moscow, Russia to address the terrorist actions of the Maute and Abu Sayyaf groups in Marawi City, Lanao del Sur. More than 400 people have been killed in the ongoing conflict.

The declaration was questioned by lawmakers, activists, and even residents from Marawi City. They said that martial law was unnecessary in pursuing terrorists, and that the situation in Marawi City did not consitute “invasion or rebellion,” the only instance wherein military rule is allowed under the 1987 Constitution. Petitions were brought before the Supreme Court.

But yesterday, the majority of Supreme Court justices upheld the constitutionality of Proclamation 216, voting 11-3-1 in favor of the martial law declaration. Three justices, however, only partially agreed with the majority’s decision and said that martial law must be limited to Marawi City and nearby areas. One justice, identified by media sources as Marvic Leonen, objected to the decision and said that the declaration had “no factual basis.”

Meanwhile, Joms Salvador, Gabriela secretary general, said that instead of providing protection, the military instills fear among the populace, especially in far-flung areas.

Despite the court’s decision, the protesters exited the street still raising and waving their flags high, their voices united in opposition to martial law. They vowed to hold another protest as long as martial law prevails in Mindanao.