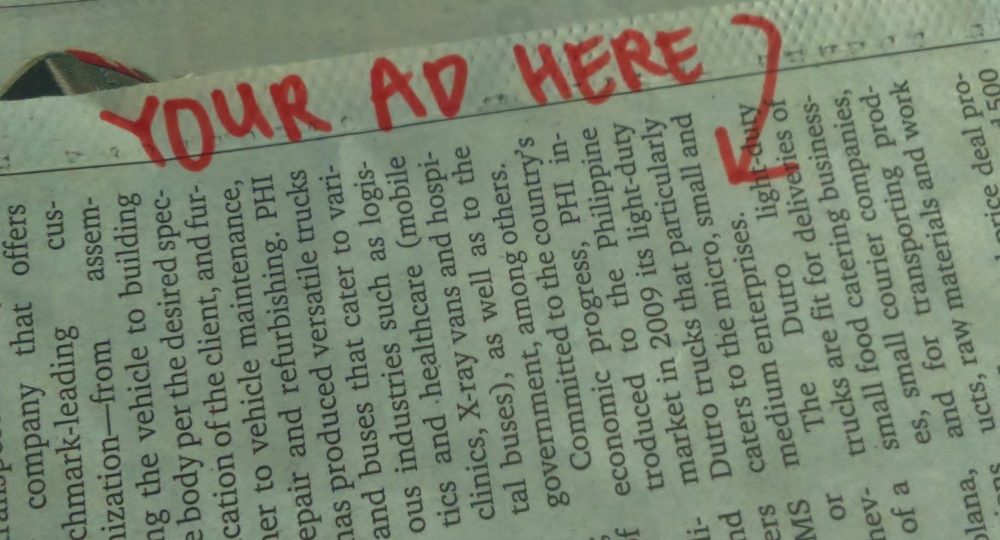 From free to cheap: ‘Native advertising’ and press independence

THE LATE TEODORO LOCSIN, SR., for a long time editor of the pre-martial law Philippines Free Press, once described the Philippine press and media as cheap rather than free. He was then referring to how easy it was to corrupt practitioners—and its consequent impact on media and press freedom. How much easier it has become today he probably won’t believe—and much less would he have expected that the metaphorical “great wall” between the editorial section and the advertising department would be giving way under the pressure of profit-seeking.

That wall has been breached before, in, among other forms, some media organizations’ putting “advertorials” in their pages or on their news programs, in most cases without forewarning readers or viewers about the nature of the material they’re getting. But the latest media business model —frankly described as a revenue stream—would practically level the wall once it becomes the rule among media organizations.

The model is “native journalism,” or as it is sometimes known, “sponsored content.” Defined by The New York Times as “shorthand for advertising that looks like editorial content,” native advertising is material generated either by a media organization or the brand itself in behalf of a brand, such as, say, a feature story on the benefits of a particular shampoo sponsored and paid for by the company itself.

There are justifiable fears that the business model would be the death of journalism. The attraction to advertisers of sponsored content is the material’s publication in the same pages as news and other journalistic forms rather than in the advertising pages, and that it would be practically indistinguishable from those forms.

In some publications such content is merely tagged as sponsored content, or located in a page identified as such. The US newspaper Washington Post, for example, puts all such content in a section labeled BrandConnect. Forbes magazine and Forbes.com have BrandVoice, in which advertisers are assured of product exposure through material otherwise indistinguishable from content provided by the publication’s contributors.

Obviously, the key to avoiding accusations of deception and reader or viewer manipulation is the identification of the material as advertising, or as sponsored or paid-for content. But there are fears that even such IDs will not guarantee that the unwary would not be misled into thinking that the material is in the same category as news and other items generated by the media organization’s staff.

In the Philippines, the online news site Rappler appears to be taking the lead in the use of native advertising. Rappler has a continuing series on the benefits of Pantene hair products that has been running since 2013, which it identifies as content resulting from the sponsorship of Pantene, and Rappler’s partnership with the company, and which it puts under the heading of BrandWrap. In some cases, however, such as when it published a series on telecommunication companies Globe and Smart, it did not identify the material as sponsored content, or when it publishes op-eds sponsored by a brand name.

Other online sites do practice native advertising. Some, like TV 5’s Interaksyon and ABS-CBN identify such sponsored content as advertising under– in the case of ABS-CBN News online, the tag BrandNews. In the latter case the network has so far not specifically name in the article the sponsor’s product, Safeguard soap, and instead argues that people should wash their hands to avoid food poisoning.

The ultimate justification for the acceptance of the practice in the US is the need of media companies for financial stability. No such explanation has been forthcoming from Philippine corporate media, specifically from online publications, but one can assume that the revenue factor is the first consideration that drives them, which means that the commercial character of the dominant media has made the practice not only possible but even necessary–in some cases for the sake of survival, in others for plain profiteering.

But among the implications should native advertising become the norm is that it would transform journalists into public relations practitioners, which is the very opposite of the journalistic enterprise. The heart of that enterprise is the news and editorial section, which generates the information that is the fundamental responsibility of journalism. But the practice of native advertising would shift it to the advertising department, which would then assume hegemony over newspaper operations.

Unasked and unanswered is the question of how the institutionalization of sponsored content would affect editorial independence—fundamentally the same question that arises when, as in Philippine practice, journalists are made to solicit ads. What would happen when, say, a shampoo about which the publication or network has published a glowing report turns out to contain ingredients dangerous to health? Equally important, if the main concern of the news media is generating revenue rather than providing relevant, fair and accurate information, would they still deserve Constitutional protection as mandated by Article III, Section 4?

Native advertising may be the financial salvation or a significant revenue stream of an ailing media organization or one focused on maximizing profitability. But it raises fundamental questions that touch on the social purpose of journalism. The gains from its practice may be considerable, but pale into insignificance when the costs—in independence and the basic journalistic responsibility of reporting and explaining the world in behalf of human understanding– are counted. In terms of those costs, the advertisers are getting what they want on the cheap.