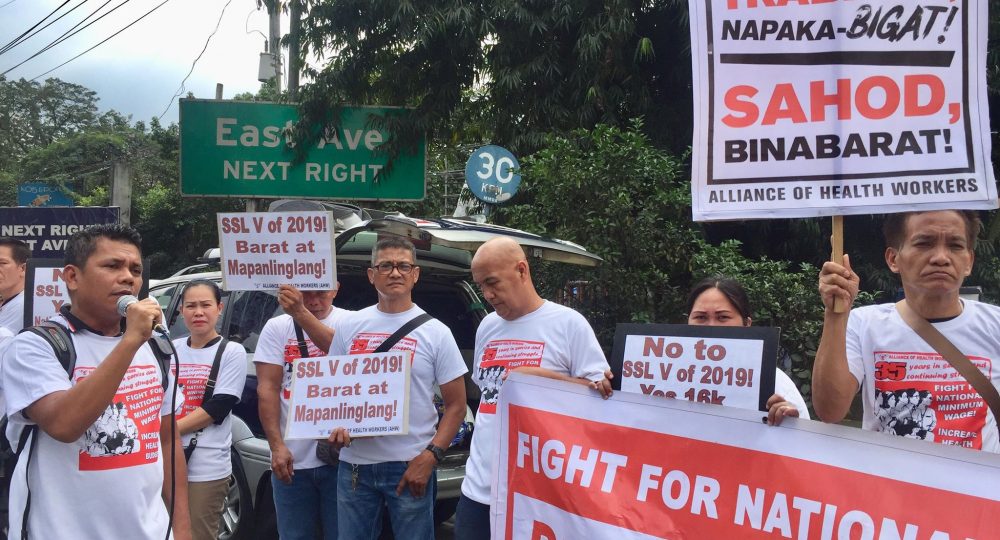 “As a health worker, I also want my daughters to become nurses,” shares Eleazar Sobinsky. Eleazar is a nurse attendant at the Lung Center of the Philippines for almost two decades. Throughout those years, he was assigned to different stations in the hospital.

Eleazar is the breadwinner of his family. His wife takes care of their two daughters, who are 14 and 17 years old. As a provider, he wanted to earn more for his family. His standard monthly salary of P14,000 is not enough, he explained.

Even with the passage Salary Standardization Law of 2019 (SSL5), the vast majority of public workers in the country like Eleazar will still receive less than P15,000 a month.

According to the Alliance of Health Workers (AHW), the SSL5 is an insult to their profession, as the salary they are receiving is not enough to sustain them and their families’ needs.

However, AHW explained that the purported increase is “deceptive”. Under the new law, the increase will not be given in full all at once, but in tranches spread out in four years. Starting this year, SG1 will receive P11,551, or an increase of P432 or P16.00 per day.

“What can you buy with a 16-peso increase?” Eleazar asked.

According to research group IBON, a family of five needs at least P32,000 a month to live decently. Even when the full salary increase under SSL5 is implemented, the monthly salary of SG1 will not reach even 50 percent of the  said family living wage.

The president of the Philippines, for example, who is under Salary Grade 33, currently earns P399,739 per month. After the full implementation of SSL5, this monthly salary is set to increase to P431,718, an almost P32,000 increase. The same story goes for other high-ranking officials like cabinet secretaries and other administrators.

Apart from the low salary, health workers also face other problems. One issue in particular is the high nurse-patient ratio in public hospitals which remains at 1:50 to 1:80.

Apart from being exposed to diseases, nurses are also exposed to verbal and physical abuse.

Due to the dire work conditions, data from the Philippine Overseas Employment Agency (POEA) show that since 2012, about 19,000 nurses leave the country to work abroad every year.

“More nurses are leaving the country because their wages are not livable. They are overworked, the nurse-to-patient ratio is too big, forcing them to leave the country and go to countries where their hard work are paid with higher salaries),” Eleazar shared.

Several health unions are also calling  on the government to procure better equipment for public hospitals,especially at a time when the national government cut the budget for health in 2020 by P10 billion.

“A genuine salary increase for all should be based on reaching the livable standards of wages and cost of living,” said Mr. Robert Mendoza, AHW National President.

Even though the current livable wage is pegged at P32,000, AHW said that workers both in the public and private sectors should receive at least half or P16,000 of the said amounth as the national minimum wage. This is equivalent to about P750 salary per day.

While P16,000 is only half of the family living wage, such an increase in the minimum wage will be a good start and will definitely be a significant increase.

“I hope my children will someday help the poor who can’t afford the basic health services,” Eleazar wished. At the same time, he also wished that by the time his children are already health workers, the salaries would already be raised to livable standards.

Into the Unknown: Growing unease felt among victims of Taal eruption as ...