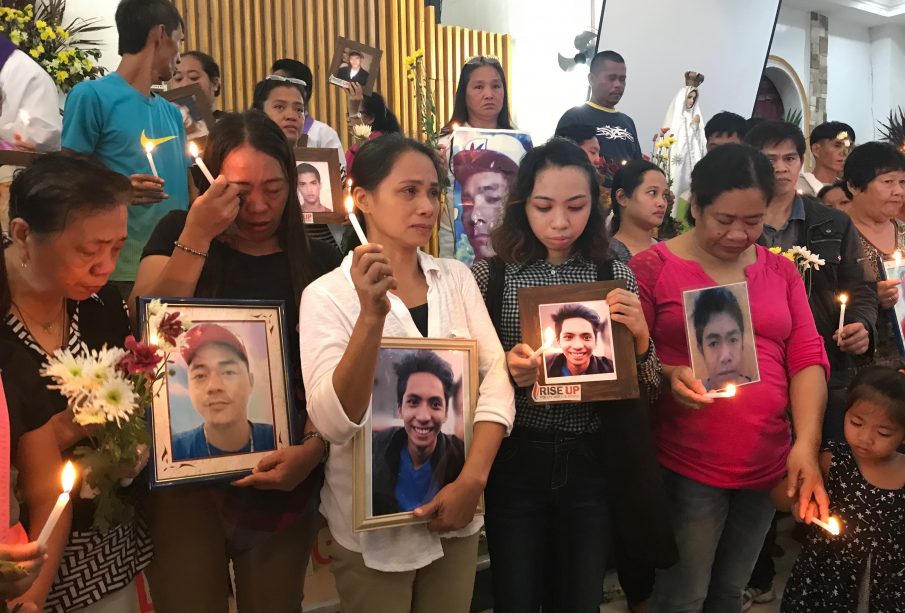 Family members and relatives of victims of the war on drugs light candles as a sign of their continuous mourning for the death of their loved ones. (Bulatlat)

“…[t]here is a reasonable basis to believe that the crime against humanity of murder has been committed on the territory of the Philippines between 1 July 2016 and 16 March 2019 in the context of the Government of Philippines ‘war on drugs’ campaign.”

MANILA – Shortly before her term ends, International Criminal Court (ICC) Prosecutor Fatou Bensouda announced that she has requested judicial authorization to proceed with an investigation into the situation in the Philippines.

In a statement released June 14 from the Hague, Bensouda said that her preliminary examination showed that “there is a reasonable basis to believe that the crime against humanity of murder has been committed on the territory of the Philippines between 1 July 2016 and 16 March 2019 in the context of the Government of Philippines ‘war on drugs’ campaign.”

She said that the available information indicates that members of the Philippine National Police, and others acting in concert with them, have unlawfully killed between several thousand and tens of thousands of civilians during that time.

Bensouda also said that her Office also reviewed information related to allegations of torture and other inhumane acts, and believes all these require investigation.

Bensouda reiterated that although the Philippines has withdrawn from the Rome Statute of the ICC that took effect on March 17, 2019, the ICC still “retains jurisdiction over crimes that are alleged to have occurred on the territory of that State during the period when it was a State Party to the Rome Statute.”

“Moreover, these crimes are not subject to any statute of limitation,” she added.

Hours before Bensouda’s announcement, families of the victims of President Duterte’s campaign against illegal drugs submitted their fourth supplemental pleading to the ICC.

Families belonging to Rise Up for Life and for Rights said Bensouda “has contributed greatly to raising our hopes that the ICC as a court of last resort can render justice and accountability since none is available in the Philippines.”

The group also welcomes British human rights lawyer Karim Khan who will replace Bensouda as ICC prosecutor on June 16. Khan reportedly led the investigation of the United Nations into the war crimes committed by the Islamic State group in Iraq.

“We welcome incoming Prosecutor Karim Khan and appeal for his consideration in prioritizing the Philippines for swift and thorough action, in light of the rampant killings and violations of human rights with impunity. With our welcome, we register our willingness to cooperate in bringing forward victims and witnesses as evidence against those responsible for these ‘Crimes against Humanity,” the group said in a statement.

Mothers of victims of drug-related killings reiterated that domestic legal remedies have failed.

“With the help of our lawyers from the National Union of Peoples’ Lawyers, we have done all we can to press charges against the perpetrators. But since there are no witnesses in our case, all the charges were dismissed by the Ombudsman,” said Christine Pascual, mother of 17-year- old Joshua Laxamana.

There are also no witnesses in the killing of Llore Pasco’s sons, leaving Pasco without recourse here in the Philippines.

“That is why we decided to file a case in ICC so that someone will listen to us. With the help of the NUPL and Rise Up we believe that someday we will attain justice,” Pasco said.

Lawyer Kristina Conti said that out of the seven cases they filed with the Ombudsman, only two cases have been approved for filing in court.

Aside from the case of Djastin Lopez, the Ombudsman also approved the filing of cases against policemen involved in the killing of Luis and Gabriel Bonifacio in September 2016.

Conti said that the Ombudsman only ordered to file homicide, which is downgraded from the murder charges that they filed.

She added that the ongoing investigation by the Department of Justice on the killings during police operations is tantamount to tokenism.

She pointed out that there are only 52 cases forwarded by the police for investigation.

“The killings that the police admitted is 6,000. It’s (this investigation) a drop in the bucket,” Conti said. “Why only investigate now?”

Conti also said that the DOJ or even the PNP also did not reach out to them for these cases.

NCIP issues violation notice to Hedcor for the continued operation of Bakun ...